Just because a bank is well known doesn't mean it's in a good position to cope with upheaval. In fact, many big banks were woefully unprepared for the 2008 financial crisis and required a federal bailout. In order to ensure that banks are prepared for potential turmoil, the Federal Reserve requires that they undergo what's known as a stress test. A stress test is an analysis of how a bank would cope with an economic crisis. The test involves the simulation of various unfavorable financial conditions to see whether a bank has enough capital to handle whatever scenario comes its way. The results are then studied from a quantitative and qualitative perspective to see whether the bank will pass or fail. Banks that hold $50 billion in assets are obligated to perform internal stress tests as well as comply with the tests run by the Federal Reserve. 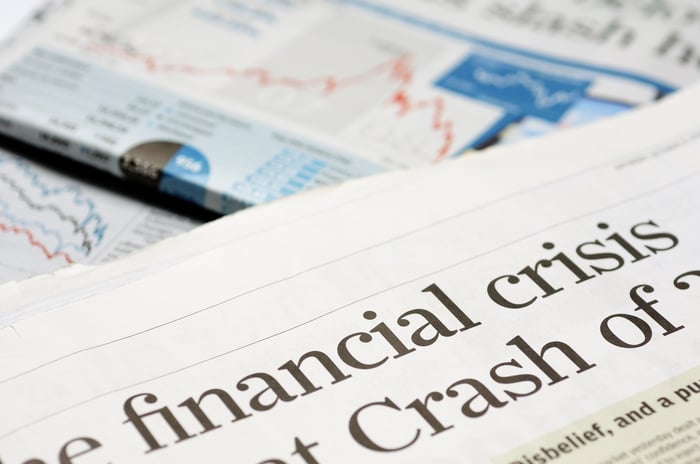 What happens during a stress test?

While different banks run their own internal stress tests, the Federal Reserve imposes a specific set of criteria each year for banks to respond to as well. Specifically, it releases different theoretical scenarios where economic conditions take a turn for the worse, such as a steep drop in employment rates, a major stock market crash, or a significant increase in oil prices. The banks that are required to submit to the stress test must then determine how they'd be able to handle such adverse conditions and present those results to the Federal Reserve.

Each bank's submission is then analyzed on both a quantitative and qualitative basis. The quantitative portion of the test examines capital, which is the money a bank raises or has available through investments or profits. Banks must show that they can maintain a certain minimum amount of capital even under adverse economic conditions, and any institution that falls below that minimum is deemed to have failed the test. Keep in mind that the Federal Reserve not only reviews each bank's calculations but runs its own numbers to determine whether banks pass or fail. The qualitative portion of the test, meanwhile, is an analysis of whether each bank has a clear sense of its vulnerabilities in the face of a financial crisis. It's not based on numbers so much as protocol and a strong ability to respond to adverse economic conditions effectively. Banks must pass both portions of the stress test in order for the Federal Reserve to allow them to return capital to shareholders.

The point of stress tests is to make sure banks are prepared for whatever economic crisis might be right around the corner. If a bank fails the test, it can't increase the amount of capital it pays to shareholders through dividends, and when this happens, its stock price will typically fall. Stress tests also force banks to play it safe by maintaining financial cushions against losses, and they serve as a form of accountability among large institutions.

Although investors in banks that fail the stress test could be negatively impacted if stock prices go down, individuals who hold traditional savings accounts at institutions that fail typically aren't affected, as these accounts are insured up to $250,000 per depositor. Similarly, those who hold mortgages through banks that fail generally go on making loan payments as usual until they're informed that a different bank has acquired their loans.

While passing a stress test is clearly a good sign, just because a bank passes doesn't automatically mean that it's a smart investment. Bank stocks can be a risky prospect and there are other factors to consider before diving in.