Dollar store chains got slammed last month as Dollar General (NYSE:DG), Dollar Tree (NASDAQ:DLTR), and Five Below (NASDAQ:FIVE) all posted disappointing earnings reports. As the chart below shows, all three stocks fell by 11% or more. 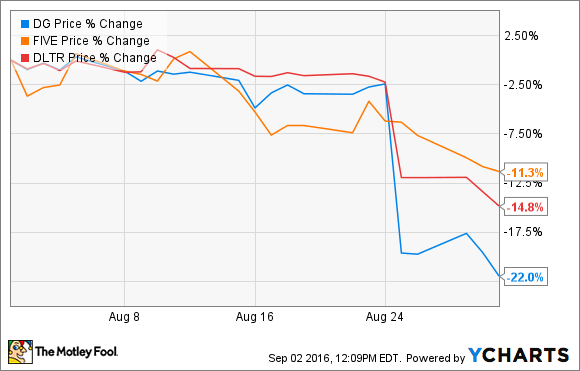 The culprit appeared to be a resurgent Wal-Mart (NYSE:WMT), which has invested to clean-up stores, raise wages, bring back greeters, and eliminate out-of-stocks. In its most recent quarter, the retail giant posted comparable sales growth of 1.6%, its best performance in several years. Wal-Mart has also lowered prices on key traffic drivers such as fresh produce, and branded and private-label goods, helping to poach customers from dollar store chains.

Dollar store stocks had thrived in recent years, finding a retail niche with low-income customers that had been ignored by other companies as well as one that was not affected by Amazon.com or the rise of e-commerce.

However, that trend may be changing as the three companies above cited similar competitive threats. At Dollar General, same-store sales increased just 0.7% in its most recent quarter as management noted the effects of food deflation and a decline in food stamp participation rates and benefit levels. CEO Todd Vasos said, "the competitive environment intensified in select regions of the country."

Five Below, on the other hand, fared better than its competitors with a comparable sales increase of 3.1%. Five Below tends to sell fewer staples than Dollar General and Dollar Tree, making it less of a direct competitor with Wal-Mart. Five Below's CEO also sounded more optimistic than his rivals, but, nonetheless, the company was affected by the weak reports from its peers, falling 11% in the quarter.

Despite falling stock prices and weakened sales, earnings growth was solid at the dollar stores in the last quarter.

At Dollar General, which had the sharpest drop last month, earnings per share still increased 14% to $1.08 due to a 6% increase in revenue, a modest reduction in expenses, and a share buyback program that reduced shares outstanding by more than 4% in the last year. With a profit margin near 6%, Dollar General remains one of the most efficient retailers on the market.

Finally, Five Below saw operating income jump 36% on a 20.8% increase in sales, and raised its full-year EPS guidance to $1.28-$1.32 even though it sees comparable sales growth slowing in the current quarter.

On the other hand, despite worrying dollar store investors, Wal-Mart is actually seeing profits fall as it steps up investments in stores, and adjusts its business model to the e-commerce era.

The lesson seems to be that the recent dip in dollar store stocks was more a result of bloated valuations rather than weak performance, as even with modest comparable sales growth, profits are still growing at a solid pace.