The defense industry is getting many more headlines than it is used to. There's the huge amount of money being proposed for the 2020 budget, and the president occasionally hounds defense contracts on the price tag for certain programs. Meanwhile, the defense budget is tacking back toward countering national powers instead of fighting terrorism.

All in all, there is a lot of money on the line for the defense industry if it can deliver on the right programs. Because of these changing budget priorities, we asked three Motley Fool contributors to each highlight a stock (or stocks) worth watching in the defense industry this month. Here's why they picked United Technologies (NYSE:RTX) and its planned merger target Raytheon (NYSE:RTN), Oshkosh Corporation (NYSE:OSK), and Kratos Defense & Security Solutions (NASDAQ:KTOS) 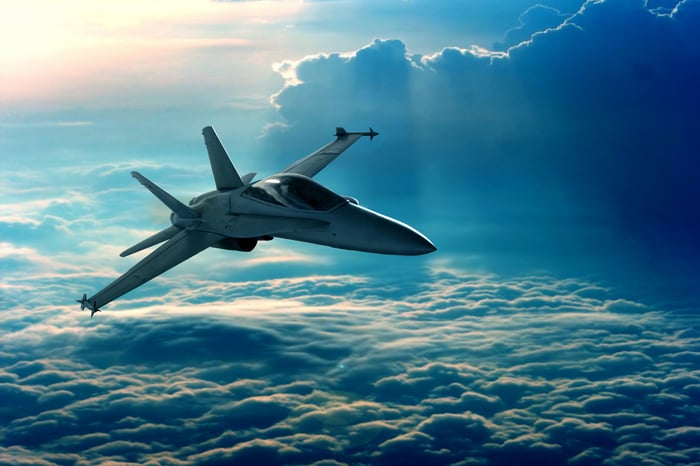 A defense megamerger worth watching

Tyler Crowe (United Technologies and Raytheon): Over the past few years, United Technologies has made several moves to boost its aerospace business. Last year, it acquired parts manufacturer Rockwell Collins in a $30 billion deal. That deal, on top of United Technologies' Pratt & Whitney division, made it a massive player in the aerospace industry for both commercial and military clients.

The most recent deal to merge with Raytheon has the potential to be huge. The combined entity expects to have around $74 billion in annual revenue and will be the second largest American aerospace company behind Boeing.

There are likely some regulatory hurdles that could sidetrack this merger. But even if the deal were to go through, investors should still tread carefully before jumping into this newly formed company.

Having a company with a finger in so many pies in some of the highest-demand parts of the commercial and defense industry -- F-35 engines, hypersonic missiles, and artificial intelligence for commercial aircraft, to name a few -- certainly sounds compelling. For investors, though, the real value will come from management's ability to integrate these two entities and Rockwell Collins into a single entity that can effectively allocate capital across all its high-growth segments.

This isn't to say that management is unable to pull it off, but defense investors shouldn't assume that a deal of this magnitude is a layup.

Worth watching while questions about its defense business are resolved

Jason Hall (Oshkosh): As of this writing, shares of this maker of specialty vehicles for the military, first responders, and the construction industry are up nearly 32% this year. That's not only better than most of its defense contractor peers, but also represents a big recovery from May, when shares fell nearly 14%. It also means Oshkosh is delivering even better returns than the S&P 500, which is proving quite resurgent after a 20% drop to end last year: 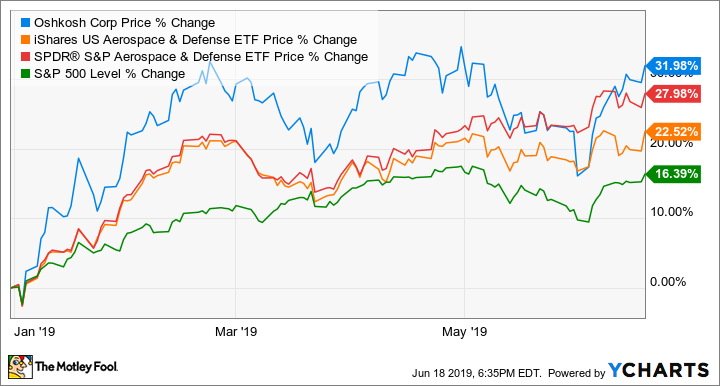 So why is Oshkosh watchlist-worthy but not a defense stock I'd suggest buying? In short, because while there are some potential tailwinds for its business, particularly construction-related equipment, there are real concerns that the Defense Department's budget priorities aren't going to favor the company.

Earlier this year, it was disclosed that the Pentagon's fiscal 2020 budget calls for $1.6 billion to buy Oshkosh's Joint Light Tactical Vehicle (JLTV). That number represents a 17% reduction from last year's $1.928 billion in purchases of the Humvee replacement and $300 million less than the anticipated $1.9 billion the Defense Department was expected to spend on JLTV orders.

Management downplayed concerns on the earnings call, as one would expect. But I think investors would be smart to let the federal budgeting process play out a little more, as well as expectations for infrastructure construction-related spending, before making any decisions on Oshkosh as an investment. That's particularly true considering that it has outpaced its peers as an investment even as uncertainty looms. Patient investors could get a better entry point, or at the very least be able to invest -- or not -- with a fuller picture of the near-term demand for its vehicles. 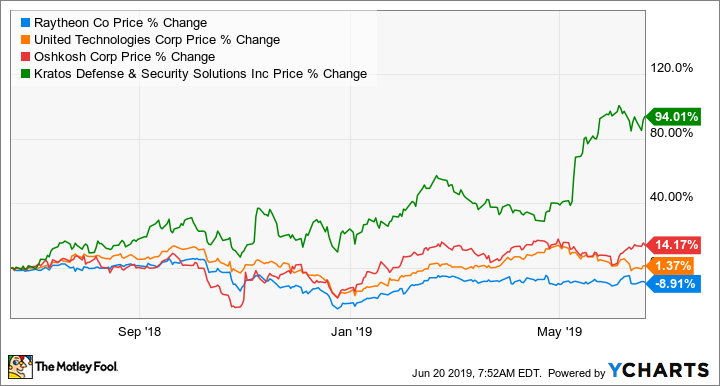 This high-flying stock may soar higher

John Bromels (Kratos Defense & Security Solutions): Drones are gaining in popularity, and not just the recreational kind. Military drones are being deployed in greater and greater numbers. In 2018, military spending on them reached a five-year high. They are used for all kinds of tasks, including combat, surveillance, and aerial refueling.

Small wonder, then, that shares of drone manufacturer Kratos have been soaring this year. The stock was up 39% in May alone, thanks to an upbeat Q1 earnings report. Year to date, shares have gained nearly 60%, more than four times the S&P 500's gain of less than 15%.

That robust gain might make investors worried that the ship has already sailed -- or that the drone has already taken off. That's certainly a valid concern, especially considering how big the stock's recent jump was, and that the P/E is currently a massive 1,117.5 -- certainly enough to give any investor pause.

But there are also reasons to believe that the stock will continue to rise. As reported by my colleague Rich Smith, the company's Valkyrie drone has captured the Air Force's attention, and Kratos expects to begin receiving initial orders later this year, while its XQ-58A "loyal wingman" drone has bipartisan support in Congress.

Still, with such a rich valuation, today's investment in Kratos may not pay off for years. That's why I'm only recommending you keep the stock on your watchlist and consider very carefully if you want to take the plunge.