Can you guess what the best-performing stock in the Dow Jones Industrial Average was in 2019? None other than Apple (NASDAQ:AAPL), which was up 89% including dividends. Not only that, but shares of Apple have continued to appreciate even in the new year, as analysts continue to upgrade the stock. 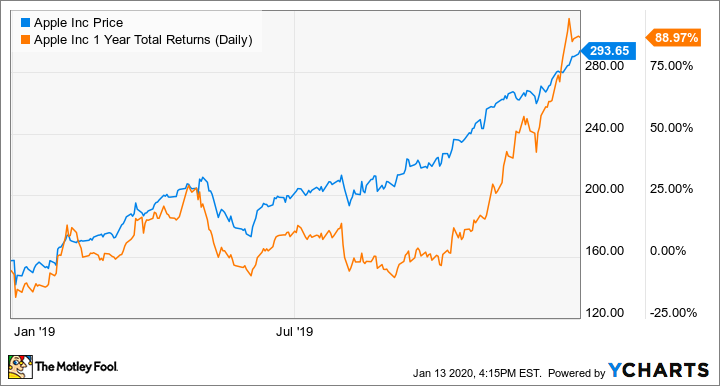 There were many reasons Apple performed so terrifically. For one, it was far too cheap to begin with at the start of the year, when the U.S.-China trade war sparked fears of a recession. But as the year progressed, Apple rolled out four big new services, putting a spotlight on its non-iPhone business. In addition, Apple's wearables segment accelerated.

Speaking of iPhones, sales came in largely better-than-feared, as Apple lowered prices in China, then lowered the entry price of the new iPhone 11 in September. That spurred a surge in demand, as many iPhone 6 and 6s users were due for an upgrade.

Later in the year, enthusiasm over 5G phones, set to come out in 2020, sparked hopes of a big upgrade cycle going forward in the 2020s. Finally, to cap off the year, Apple noted record-breaking performance from its App Store, once again putting the highlight on its recurring services business, which helped increase the PE multiple investors were willing to pay for Apple's shares.

As a proud Apple shareholder, this was all music to my ears -- and my portfolio; however, Apple shareholders now face a bit of a conundrum. While I still believe Apple is a great long-term holding, the stock has obviously had a great run and is not exactly "cheap" anymore at over 26 times earnings.

Yet, instead of selling, here's what I did to increase the yield on my Apple stock, in a way that will allow me to continue to hold onto my shares... up to a point. 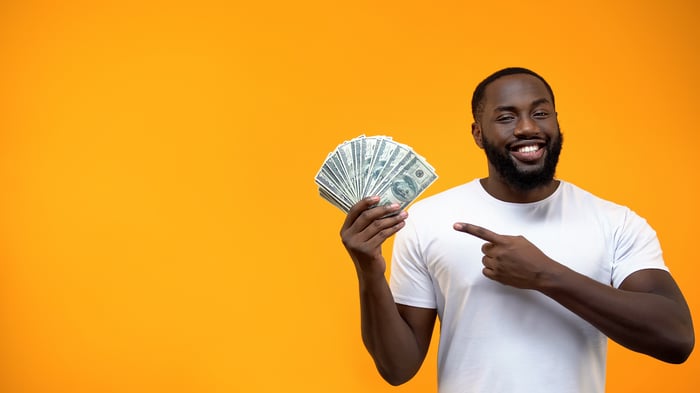 Selling Calls against my Apple shares

Last Thursday, I sold a call option against my Apple shares, expiring in June, with a strike price of $400.

Pricing options can be complicated, but an option's price really boils down to a handful of factors:

While some of these variables can be complicated to calculate, investors should pay the most attention to price, time to expiration, and volatility when assessing whether to buy or sell an option.

Now, I only sold that call because because I am fortunate enough to own over 100 shares of Apple, a large holding that I've periodically added to over the course of several years. Selling an option against an equivalent amount of shares is called a covered call strategy.

If I owned less than 100 Apple shares, I probably wouldn't have sold the call, since that would have put me at risk of having to sell short Apple shares at $400. As we've seen, momentum can be a powerful force in the market, and shorting a stock opens an investor up to (theoretically) unlimited losses, in theory. Personally, I wouldn't wish to be short as great a company as Apple at almost any price.

Nevertheless, if Apple surges above $400 in the next six months, or another 30% gain from these levels, I'd be OK with selling 100 shares at that time. Although, to be honest, I would prefer Apple stay below those levels, as I'd like to hold onto the shares I have for the long-term.

If Apple's stock price stays below $400 per share at June 19, the option expires worthless, and I'll have pocketed an extra $1.63 per share. Apple's annual dividend payout is currently $3.08 per share -- though that number may get a significant boost this year. That means by selling the call option, I've more than doubled the $1.54 dividend payout I'll receive over the next six months.

Covered calls are a low-risk use of options

A covered call strategy is the lowest-risk way to use options, because the only risk you are taking is having to sell your stock at a lower price than you'd like. This is opposed to buying call options, which puts one at risk of losing the entire premium, should the stock not reach the strike price.

You could also sell put options -- the opposite of selling calls -- which also brings in a cash premium. However, selling puts is risky, in that you could be forced to buy 100 shares of a stock should the price fall below the strike price. If the price of that particular stock collapses, you could be on the hook to buy 100 shares at a much higher price than you'd like. Nevertheless, if you have excess cash in your account that can cover the entire 100-share purchase, a cash-secured put option strategy is an OK way to make disciplined buys at lower prices, or pocket the premium, should the stock stay above the strike price.

Finally, buying put options gives you the right to sell a stock, and thus gives one downside protection; however, you risk giving up your premium should a stock stay above the strike price.

Selling covered calls is actually a great way to boost the yield of a dividend stock portfolio, if you have a diversified basket of dividend stocks and own 100 or more shares of each holding. The covered call strategy works especially well in IRA accounts, as these accounts are exempt from capital gains taxes. That means if a stock rises above the strike price and you are forced to sell, no biggie – you can just buy another dividend stock to replace what you've sold without paying taxes.

Why I chose to sell Apple calls now

Apple's stock had been on a tear recently, so the price of its options has risen accordingly. If you're going to sell covered calls, it's probably best to do so after a big run up in the stock, as you will get a bigger premium for the strike price. You also don't want to short-change yourself by selling a stock below what you think it's worth.

Using options to supplement your income can be a fine strategy to make some extra cash; just make sure that you are using options according to your own risk profile. As a (relatively) young person, I'm OK with Apple being more volatile or even going down, as I'd like to hold the stock for the long-term. Therefore, instead of selling now and pocketing my profits, for my own personal finances and situation, selling a call against my Apple stock was the best strategy for me.

If you're interested in learning more about options trading, check out our Foolish introduction to trading options to help you get started.