The energy industry is going through a number of changes simultaneously, and they all point to a bigger role for clean energy. Wind and solar energy are booming around the world, and EVs are upending the passenger vehicle industry.

One technology that's largely been left in the dust is hydrogen. Passenger vehicles were once seen as the future for hydrogen, but improvements to battery technology has made that untenable in most cases. But hydrogen is starting to find applications where it has long-term value, and that could create a huge market for some of the industry's hottest stocks.

Where hydrogen has a bright future

Hydrogen isn't the kind of fuel that will be feasible to use in every application. It can be costly to build hydrogen infrastructure, fuel cells are still relatively expensive, and hydrogen typically hasn't been all that "clean" since most is derived from natural gas. These challenges have made it difficult for hydrogen to break into markets like automobiles, where a decade ago it seemed like hydrogen had a bright future, and batteries have taken over.

But batteries don't make sense everywhere, and having a readily transferable fuel can be extremely valuable for some applications. Plug Power (NASDAQ:PLUG) has built a niche developing technology for forklifts, an application where fueling time can be critical. Ballard Power Systems (NASDAQ:BLDP) is making fuel cells for forklifts, buses, and even marine applications. Then there's Bloom Energy (NYSE:BE), which makes fuel cells that actually run on natural gas for backup power and microgrid applications.

Think of these markets as a foot in the door for fuel cells and hydrogen. But the real future is in grid storage, long-haul trucking, and marine applications. Here's why, and who is making moves to build a business in these markets.

The future of fuel cells

I'm most interested in seeing how Bloom Energy can potentially solve two problems at once with a new strategy. The company recently announced a new solid oxide electrolyzer that it expects to have available in 2021. In its simplest form, an electrolyzer simply uses energy (usually electricity) to split water into hydrogen and oxygen atoms. It's the reverse of the chemical reaction that takes place in a fuel cell.

The reason electrolyzers are important for energy is that -- if they're cost-effective -- they could essentially make fossil fuels obsolete by creating clean, abundant fuel. Water is abundant, and there's more than enough wind and solar energy to replace all fossil fuels, so clean energy isn't a problem either. Bloom Energy plans to use this fuel for its backup markets, but it could also be used in large ships currently being developed by Samsung Heavy Industries and Bloom Energy. This could disrupt shipping as well as the grid.

Thinking about the supply chain of hydrogen itself to the point of consumption is important, and Bloom Energy and Plug Power seem to have made it a critical piece of their businesses.

Which company has what it takes to disrupt energy? 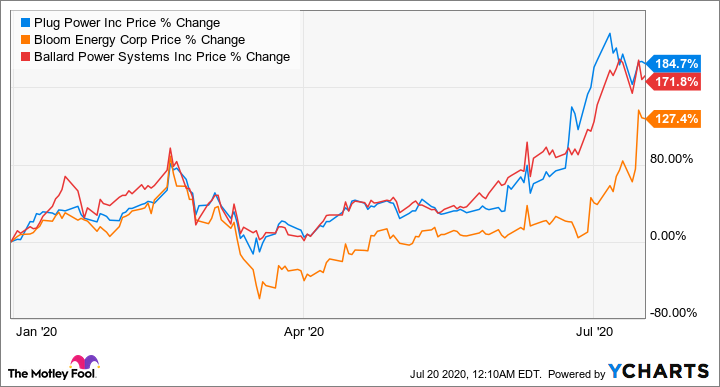 I would like to see Plug Power move past material handling to larger-scale products, which would create a demand source for its new hydrogen production business. If it can gain traction in the long-haul trucking market with the 125 kW ProGen hydrogen engine it could be an interesting player, but right now the company is still burning money while it tries to build its business.

Ballard Power Systems is another company I would like to see generate positive cash flow before betting on the stock. It has the most diverse set of end markets of the three, but may not be the go-to supplier for big markets like energy storage, long-haul trucking, and shipping. 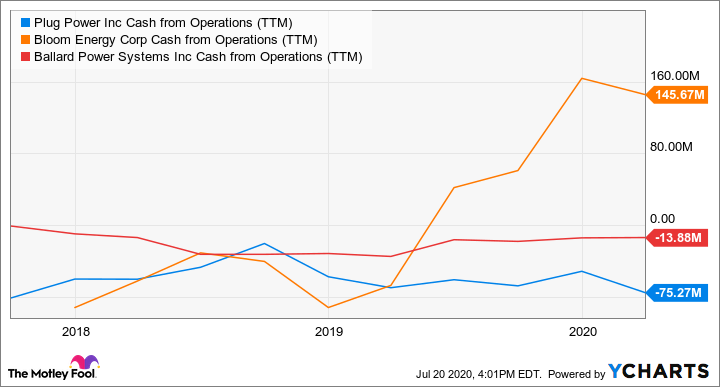 The company I like best in hydrogen is Bloom Energy. The company already has a foothold as a source of backup power for buildings, so transitioning to energy storage with electrolyzers is a natural move, and this could be a big player in electricity generation long-term.

Shipping is another business that's very intriguing long-term. Bloom Energy could simply replace other propulsion methods, making the shipping industry emissions-free relatively quickly. Those two markets alone could make this a disruptive renewable energy stock -- which is why it's my pick to win long-term in the hydrogen industry.