Oil prices have basically come back to the levels they were trading at before the coronavirus pandemic, materially boosting the stock prices of oil drillers. That said, some players in one of the most consistent sectors in the energy space, the so-called midstream, are still languishing. If you are looking for cheap energy stocks, this is the place to examine right now. Here are three names worth your review.

Enbridge (NYSE:ENB), based in Canada, is one of the largest midstream companies in North America. It operates in four main areas, including crude oil pipelines (54% of EBITDA), natural gas pipelines (29%), a natural gas utility operation (14%), and renewable power (3%). That's actually a more diversified mix than most of its peers -- and it's also important to note that the company has made a multi-decade shift toward natural gas in an attempt to position itself for a low-carbon future (natural gas is considered a transition fuel). This is also why the company has a renewable power division, which has a number of large offshore wind projects in the works in Europe that will keep it growing in the near term. We aren't in a low-carbon world yet, but Enbridge is preparing for that day. 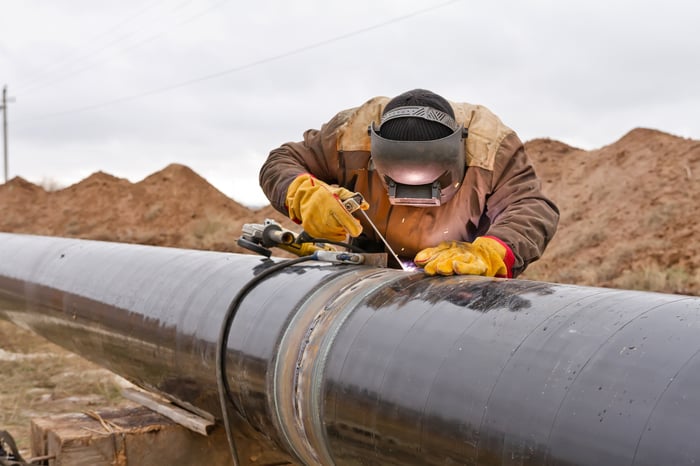 One of the reasons why investors are concerned about Enbridge, and why the stock remains 8% below its 2020 peak, is that it has two material projects in its oil pipeline business (Line 3 and Line 5) that are facing pushback from local governments and environmentalists. This is also why the 7% dividend yield here is near all-time highs, despite an over-25-year history of annual increases (making it a Dividend Aristocrat). There are real risks, but Enbridge's projects are vital to the regions it serves, and appear likely to continue despite the headwinds. If you can handle the often-volatile headlines, Enbridge remains a well-situated and relatively inexpensive option in the broader energy sector.

Enterprise Products Partners' (NYSE:EPD) 7.3% distribution yield is also near the highest levels in its history. The master limited partnership's units are off roughly 19% from their peak levels in 2019. Like Enbridge, Enterprise is a North American midstream giant, but it doesn't have a utility operation or renewable power division. That said, it is heavily focused on natural gas, and is investing in processing assets that turn energy commodities into other vital products (often referred to broadly as petrochemicals). So Enterprise's largely fee-based business continues to move forward, and is providing the world with the things it needs even in a cleaner future.

Meanwhile, the partnership has an investment-grade-rated balance sheet, and covered its distribution by 1.6 times in 2020, despite the pandemic. In other words, Enterprise's distribution doesn't appear to be at risk here. To be fair, growth is likely to slow down, with capital spending plans at more modest levels than in the past. For example, the first quarter distribution was a skinny 1.1% higher than the same quarter of 2020. However, with a historically high yield, that's probably not a bad thing. And, for income-focused investors with a value bent, the mixture of yield and financial strength is definitely worth a closer look. 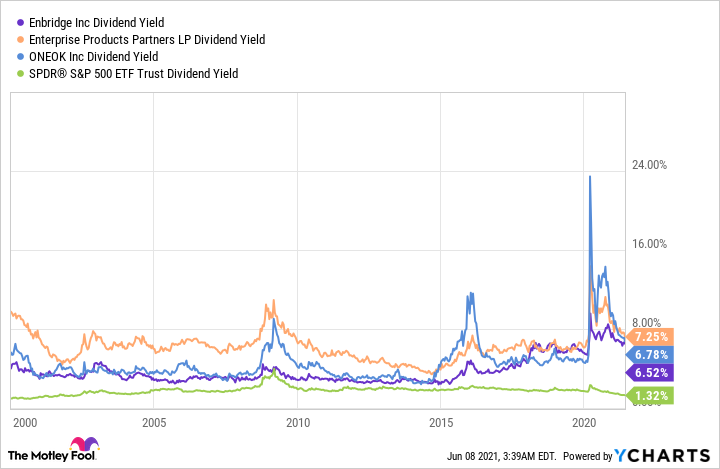 Like the other two names here, ONEOK (NYSE:OKE) is offering a historically high dividend yield at roughly 6.9%. ONEOK is even more focused on natural gas than Enterprise, with this fuel making up all of the company's business. That said, gathering assets (which connect wells to larger pipelines) are a key piece of the business here, which has some investors worried. That's not unfounded, given that a drop in drilling activity could have an outsized impact on the company's business.

However, the company's investment-grade-rated balance sheet gives it material flexibility. And while dividend coverage dipped early in the pandemic, ONEOK covered its dividend by 1.17 times in 2020 and 1.59 times in the first quarter of 2021. With natural gas expected to play a big role in the shift away from dirtier fuels, notably coal, the quick bounce back in ONEOK's business is fairly reassuring, even if it highlights the more volatile nature of its operations. For more aggressive types, that might be worth the price of admission. Note, too, that ONEOK, which is structured as a regular corporation, avoids the tax complications that come along with buying a partnership or a foreign company.

The midstream sector is not without its risks -- the assets that Enbridge, Enterprise, and ONEOK own, while backed by long-term contracts and fees, are largely tied to carbon-based fuels. However, many investors are treating these midstream players as if oil and natural gas are going to suddenly become obsolete, which is highly unlikely. If you are willing to go against the clean energy zeitgeist just a little, all three look cheap and worth your consideration.