Global warming could have a significant impact on our economy if left unchecked. That's why governments and other institutions are investing heavily in cleaner alternative energy sources to reduce the carbon dioxide emissions driving climate change.

Several companies have joined this fight. We asked some of our contributors which ones stand out as those leading the charge. Here's why they believe TotalEnergies (NYSE:TTE), Brookfield Renewable (NYSE:BEP)(NYSE:BEPC), and NextEra Energy (NYSE:NEE) are great stocks to consider owning as the fight against global warming heats up.

Reuben Gregg Brewer (TotalEnergies): Once known just as Total, the French integrated energy giant switched its name to TotalEnergies in 2020 to highlight a major business transition. Effectively, management has seen the writing on the wall and is moving to increase its exposure to clean energy. That said, its business remains tied to carbon fuels and will be for years to come. Don't fear, that's actually a good thing.

Because of global warming concerns the world is moving away from coal and oil. TotalEnergies doesn't produce coal and it is actively working to reduce its reliance on oil by focusing on only its best assets. Meanwhile, the company's natural gas exposure is set to grow. Even though this is a carbon fuel, it is cleaner-burning than coal or oil and is expected to help the transition to cleaner alternatives. At the same time TotalEnergies is planning to triple the size of its "electrons" business by 2030.

If dealing with global warming were as easy as flipping a light switch this would be a terrible plan. Luckily for TotalEnergies, energy transitions take time (think decades). And, thus, it can still bleed the cash cow oil and gas business to fund its transition to a cleaner future. It's a particular win for dividend investors because the company believes it can sustain, and perhaps even grow, the dividend while it shifts with the world around it. That means the fat 6.2% dividend yield looks very strong despite the negative view many investors have of the oil patch. Indeed, this energy giant is tackling global warming and paying investors exceptionally well to stick around.

The decarbonization partner of choice

Matt DiLallo (Brookfield Renewable): Brookfield Renewable is a global leader in producing renewable energy. It currently operates 20 gigawatts of renewable energy generating capacity, including hydroelectric, wind, solar, and energy transition assets. This existing portfolio is equivalent to eliminating all of London's annual emissions or removing 6 million cars from the road.

However, it's still in the early stages of fighting global warming. The company has 31 GW of renewable projects currently in its development pipeline. That's enough clean energy to offset all of Houston's annual emissions (the center of the U.S. oil and gas industry) or power 6 million homes for one year. These projects run the gamut from new hydroelectric plants, onshore wind, and rooftop solar to emerging opportunities like wind repowering, offshore wind, and green hydrogen.

Brookfield is also becoming the partner of choice for institutions seeking to decarbonize their operations. For example, it partnered with Trane Technologies to offer decarbonization-as-a-service, combining its rooftop solar and energy storage expertise with Trane's energy-efficient systems. It has also partnered with tech giants like Amazon and Apple to help them achieve their climate goals.

Brookfield Renewable is one of the best-positioned companies to take on global warming. It's a leader in producing renewable energy and has an even larger (and growing) backlog of development projects to help keep climate change at bay.

Neha Chamaria (NextEra Energy): Given how fossil fuels are the biggest factor behind global warming, any company that strives to decarbonize the world through products and services that revolve around cleaner sources of energy deserves your attention. And if the company is already at the forefront of clean energy, you probably have found a winner in the making. NextEra Energy is the finest example -- the company is already the world's largest producer of wind and solar energy, operates natural gas and nuclear energy assets, and aspires to be the "largest, most profitable clean energy provider in the world."

As of July, NextEra Energy has a backlog of almost 16.7 GW of signed contracts. The company expects to grow its adjusted earnings per share by 6% to 8% through 2023 off 2021's base, grow operating cash flow in line with adjusted earnings, and increase the dividend annually by 10% through 2022 at least. By 2024, NextEra Energy expects to have built a pipeline of nearly 30 GW at the highest end of its estimate. 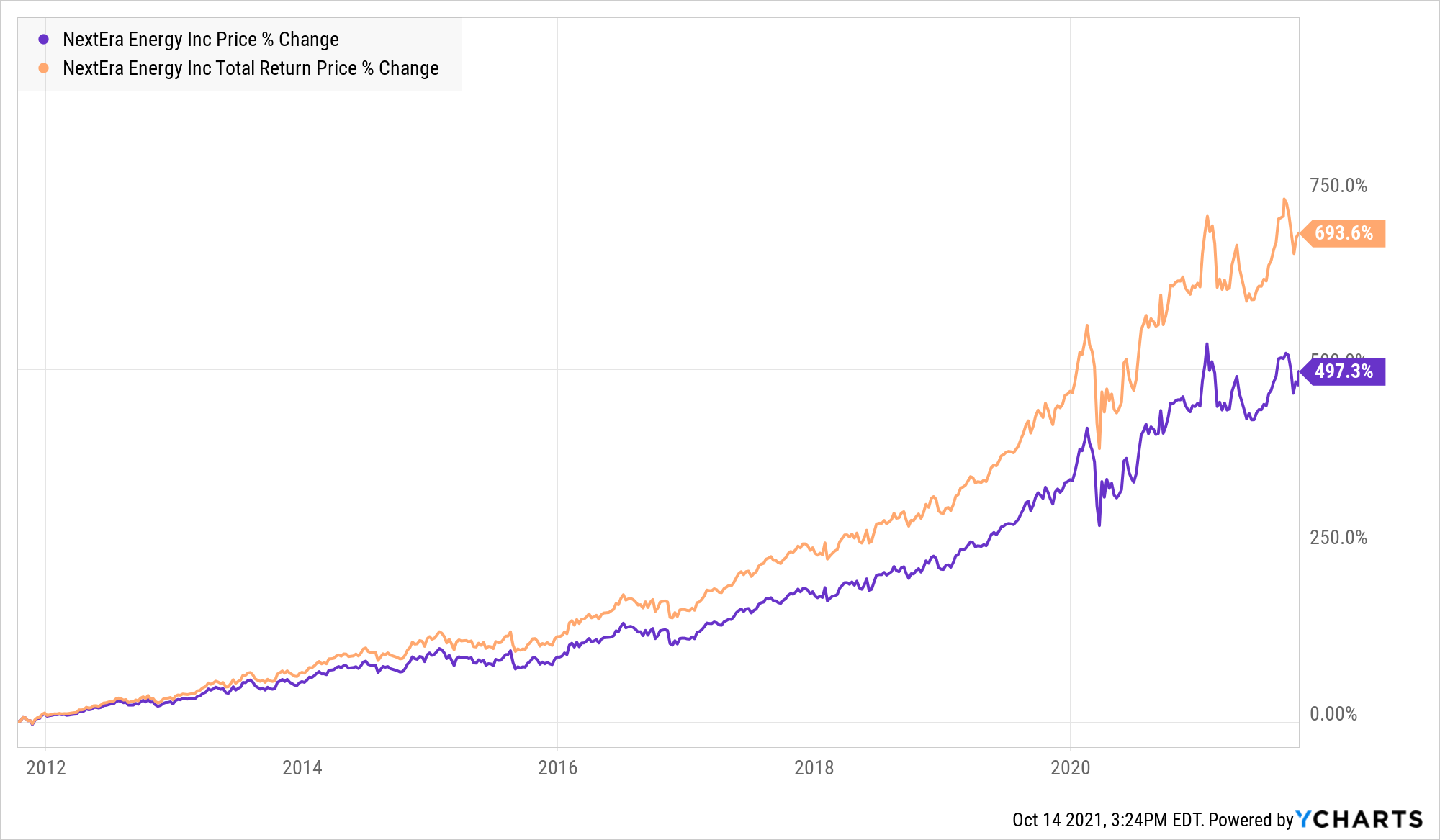 So far, NextEra Energy's dividend growth has hugely helped boost shareholder returns, and I don't see a reason why the trend won't continue, given that the world has only just started transitioning to renewable energy. In other words, NextEra Energy isn't just providing a solution to global warming through renewables, but is doing so profitably and sharing a good chunk of those profits with shareholders. In fact, you'd be hard-pressed to find a better Dividend Aristocrat stock tackling global warming head-on.