The electric vehicle (EV) industry is smoking hot right now. New players are entering the space, existing titans are opening their pocketbooks and investing in EVs, and a slew of support players such as charging companies, battery companies, and autonomous driving companies are accelerating innovation.

As the saying goes, a picture is worth 1,000 words, and sometimes you must see something to believe it. Here are three EV charts that are likely to make your jaw drop and provide proof of the investment potential of electric vehicles. 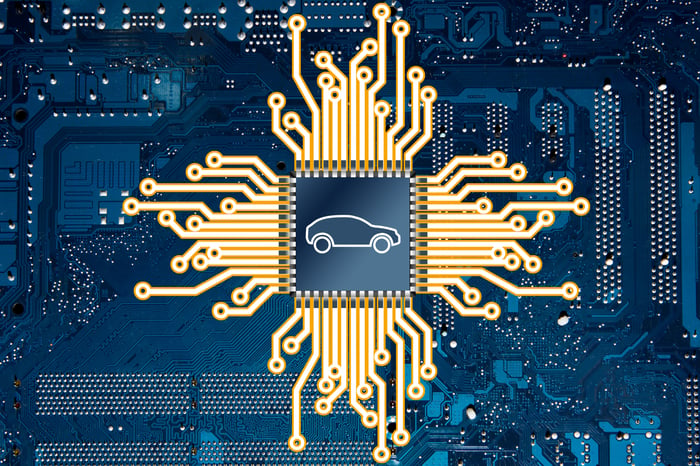 1. The market has lofty expectations for EVs 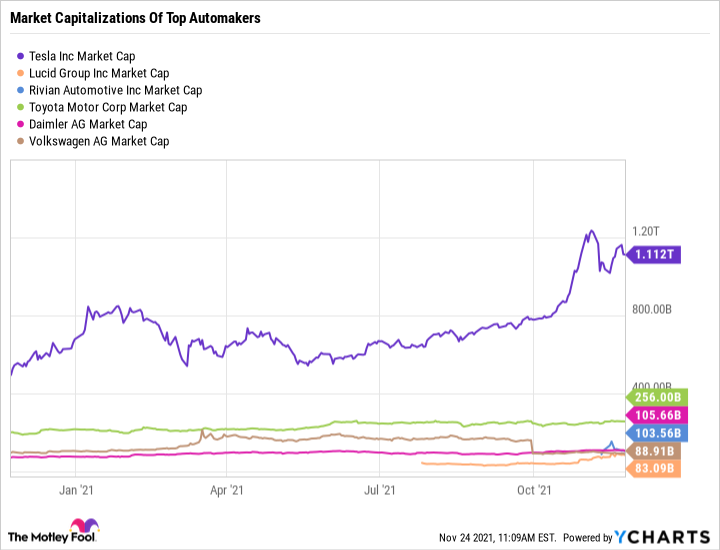 2. Tesla has emerged as an incredibly profitable company

In just three years, Tesla has grown its quarterly deliveries from under 100,000 units to nearly 250,000 units. It has been free cash flow (FCF) positive since the second quarter of 2020, and it has booked positive net income since Q3 of 2019. 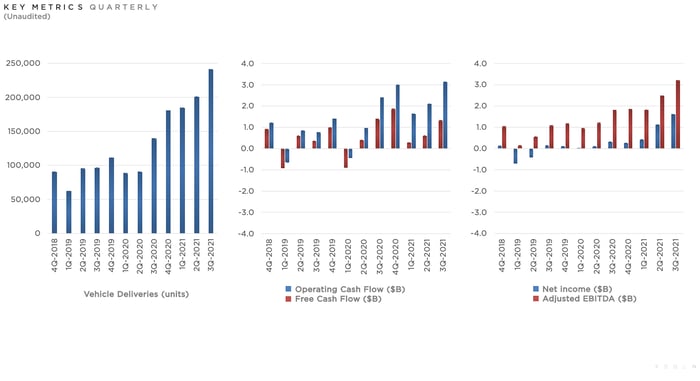 Tesla's manufacturing capacity has grown thanks to Gigafactory expansions into California, Texas, Germany, and China. Tesla's ability to scale is impressive, but what really stands out is that it has sustained a high operating profit margin even as it sells lower-priced models. Tesla's stock remains a highly contentious battleground play backed by supporters who believe it's worth the price and folks that say it will be impossible for it to grow into its valuation. But no matter what you think about the stock, there's no denying that the company is efficient, highly profitable, and growing extremely quickly.

3. Tesla is setting a high bar for the newcomers

Management projections as of May 13, 2021. Data source: Lucid Group.

These numbers should be taken with a grain of salt as they are all projections. However, they do show the potential for Lucid to grow into its current $85 billion valuation. Lucid's 2026 projections would give it about a quarter of Tesla's forecasted 2021 annual production, about half its revenue, and about the same gross profit margin.

If Lucid really did put up these numbers, does it deserve to be worth maybe a fourth or half as much as Tesla? That's hard to say because Tesla's manufacturing is so efficient. It has its own network of supercharger stations, its brand is powerful, and it has other revenue streams from solar and storage. Speculation aside, the point is that newer automakers are bringing impressive technology to the table. They are flush with cash, will likely have ample options to raise more cash if they need to, and have global ambitions. In sum, they mean business and Wall Street is taking them seriously by awarding high valuations.

Different approaches for investing in the EV industry now

For most folks, investing in a basket of EV stocks they believe in offers the best way to capture upside while limiting downside risk. Risk-averse investors may want to stick to seasoned veterans like Ford (NYSE:F), which is using the strength of its core business to invest in EVs. A general catch-all way to invest in EVs is through charging companies like ChargePoint (NYSE:CHPT) that should grow along with the industry, no matter which automakers rise and fall. Finally, there's the high-risk, high-reward option, where Lucid seems best positioned to flourish over the next decade.