When it comes to sector exchange-traded funds, there really isn't that much variety. With just over 200 REITs trading on U.S. exchanges, there are only so many ways to slice up the sector and put it in unique packaging.

The three ETFs listed below, though, manage to effectively encompass all the variety that you should expect in a real estate investment trust ETF:

Some of these funds invest only in the biggest and best REITs while others invest in a broad range of REITs. Here's the case for each fund. 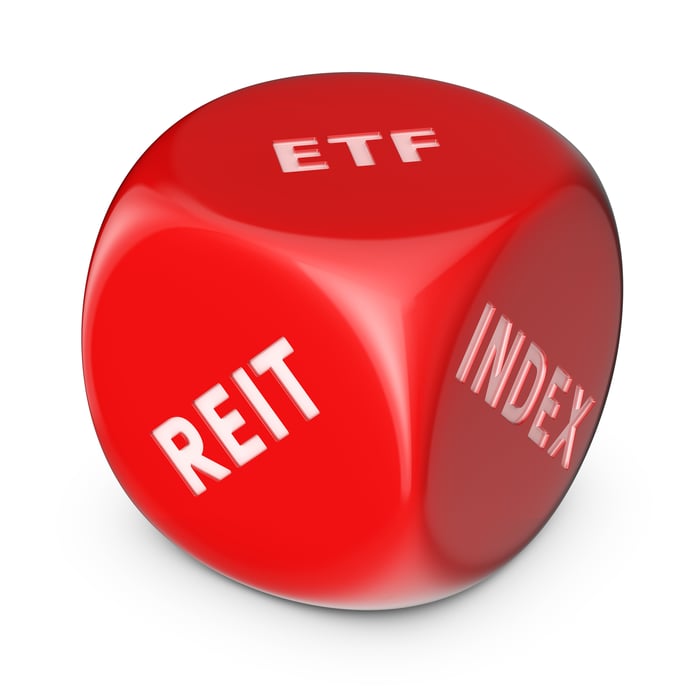 Easily the industry king by assets, this ETF is also one of the least expensive. You can rest assured that you, not the fund company, will be enjoying the luscious REIT dividends given its modest expense ratio of 0.12%.

The case for the Vanguard REIT ETF is simple: It only invests in equity REITs and has a bias for larger issuers. As a result, it can be best summed up as a diversified "large-cap" REIT ETF. It even eschews hybrid REITs, which own property and alternative assets like mortgages.

The fund held positions in 150 different REITs as of April 30, 2016. These REITs are further diversified by the type of properties they hold, though retail REITs make up the biggest component at roughly 24% of the fund.

This fund should be a favorite among conservative investors who would like a little extra yield (4.1% at the time of this writing), but who want to avoid the risk of the highest-yielding mortgage and hybrid REITs.

Step up on the risk spectrum and you'll find a bigger yield waiting for you. This high-yielding REIT ETF offers a 4.28% dividend yield at the time of writing because it doesn't discriminate. It holds everything from traditional equity REITs to mortgage REITs and even timber REITs.

The fund is designed to track the performance of the Dow Jones U.S. Real Estate Index, and has largely achieved its goal over its history. Investors might have only one complaint: It's pretty expensive for the sector, carrying an annual expense ratio of 0.44% of assets.

Given the fund is market cap weighted, its largest positions make up a significant portion of the fund. The top 10 holdings made up 33.8% of fund assets at the time of writing, despite the fact it held stock in 128 different real estate investment trusts.

This fund is best suited for someone willing to tolerate a little extra risk for higher yield or who wants the convenience of owning every type of REIT by purchasing just one fund.

This exchange traded fund gets a top spot for being the cheapest REIT ETF on the market, with an annual expense ratio of just 0.07% of fund assets. This Schwab fund seeks to track the performance of the Dow Jones US Select REIT Index, which excludes all but the most plain-vanilla equity REITs much like the Vanguard REIT ETF.

Holding just 106 REITs at the time of writing, it's the most concentrated ETF on this list. Notably, it's also market cap weighted, resulting in a strong bias toward large-cap REITs. The top 10 holdings made up a whopping 41.1% of fund assets at the time of writing. The largest holding, Simon Property Group, constituted 9.1% of the fund's assets.

Due to a focus on equity REITs and its bias toward REITs with the largest market capitalizations, this fund offered the lowest yield of just 2.6%, well below Vanguard's and iShares' funds.

But despite a lower yield, the fund's five-year total return is within mere basis points of Vanguard's ETF, but exceeds iShares' fund performance, due in no small part to a lower expense ratio.