The federal funds rate is the benchmark interest rate at which banks lend each other money. It has a direct bearing on many other rates, and it's the concept we're talking about when we say "the Fed lowered rates today." As we've seen throughout the past two decades, disasters can and do happen -- sometimes for no particular reason -- and the Fed will seek to use the tools at its disposal to calm the economy while stimulating investment. The federal funds rate is one of those tools.

What is the federal funds rate?

As noted, the federal funds rate is the interest rate at which banks lend each other money. It's also known as the overnight lending rate. The Federal Open Market Committee (FOMC) meets eight times per year to set the rate, which is typically expressed as a range.

The current rate is set between 0.00% and 0.25%. This range is used to influence a number of other important interest rates we see in everyday life. 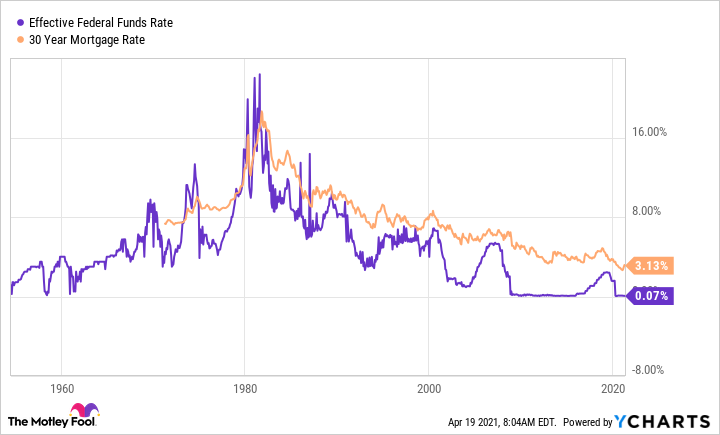 Simply by thinking about some of the major events of the past several decades, we can get clues about how and why the federal funds rate has moved as it has. In the mid-2000s, interest rates had begun to rise rapidly, but the housing and financial crisis abruptly brought rates to zero for almost another 10 years. As rates slowly began to rise again in 2018, the coronavirus pandemic quickly shut the door and brought rates down to where they stand today.

Impacts of the federal funds rate

Second, the federal funds rate heavily influences the interest rates charged in the broader economy (and to consumers) by serving as a benchmark. One of the most cited rates is the prime rate, which is the interest rate banks charge to their best customers (or those most qualified to pay). The prime rate is directly influenced by the federal funds rate.

Next, the federal funds rate is not to be confused with the discount rate, which is the rate of interest the Federal Reserve charges to make loans to banks and other depository institutions.

Last, the federal funds rate is closely linked to short-term interest rates, such as T-bill yields, but it is not directly predictive of long-term rates. Simply put, short-term changes in interest rates influence, but do not solely determine, longer-term rates. A lot can happen over multi-decade periods.

Know the basics and what they mean for you today

It's unlikely you'll be quizzed on this information anytime soon, but it's good to know what the federal funds rate is and how it can influence the other interest rates you may come across in everyday life. When you see the Federal Reserve chair going on about lowering or raising the federal funds rate, you'll know this might very well impact the cost of your new fixed-rate mortgage or the cost/benefit analysis for taking a loan against your vehicle.

Simply knowing the federal funds rate is set by the FOMC, that it can affect many of the rates you see on storefronts, and that it can impact your investment and borrowing decisions goes a long way. Consider that interest rates are still quite low, and, if you've been thinking about borrowing money for one reason or another, it might not be a bad time to do it.

Put another way, consider that the "price of money" is still at a bottom. With the recent improvement in unemployment numbers as we come out of the COVID-19 pandemic, don't be surprised if rates begin to rise over the next few years. All we can do is look at history and do our best to take advantage of the patterns we believe may lie ahead.