A multitude of factors has resulted in ho-hum performance from agricultural companies in the past three years. From weakened selling prices to an oversupply of grain, from droughts to floods in key markets, the hits have kept coming. As a result, most agriculture stocks have been walloped by the S&P 500 in recent years.

Despite the poor performance, or perhaps because of it, long-term investors have several opportunities to capitalize on an eventual rebound. The leading market positions of FMC Corp. (NYSE:FMC), Archer Daniels Midland (NYSE:ADM), and Bunge (NYSE:BG) make them well-positioned to break out. They're three no-brainer stocks to buy in agriculture. 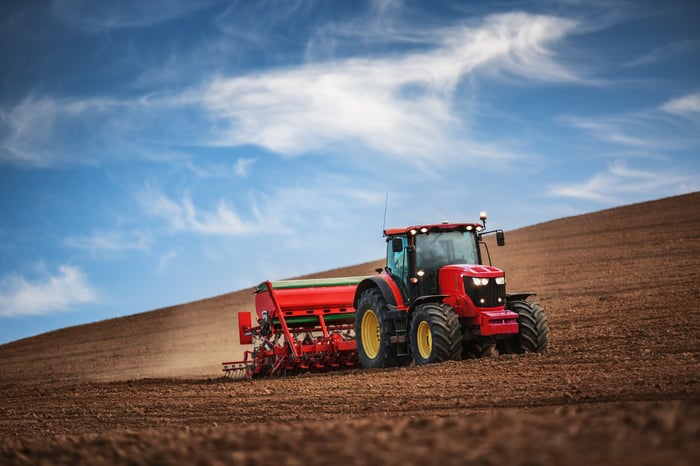 Crop protection with a lithium boost

Earlier this year, FMC Corp. became the world's fifth-largest crop protection company, ranked by annual sales, after acquiring most of DuPont's insecticide portfolio and pipeline. The injection of several leading insecticide products will result in an agricultural solutions segment that rakes in nearly $3.8 billion in annual revenue. That alone will catapult the company out of its multiyear rut in which it failed to grow the top line above $3.28 billion. A boost to operating cash flow, future product potential, and global reach should follow as well. 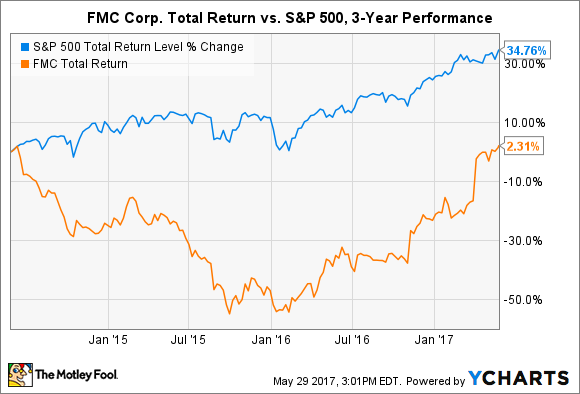 More impressive, the dominant position in agricultural solutions doesn't even factor in FMC Corp.'s fastest-growing segment: lithium. While it will likely contribute less than 10% of total sales in 2017, a combination of high selling prices and strategic investments that will triple battery-grade material production promise to allow the segment to have an outsized contribution to the company's bottom line. Plus, with management's intention to eventually spin off the lithium segment as a separate publicly traded company, this is a 2-for-1 opportunity for long-term investors. That is, investors may end up owning two highly profitable stocks for the price of one today.

Profitable in any econonomic environment

Archer Daniels Midland processes raw agricultural products into food, feed, and chemical ingredients. While the stock trades at nearly the same price it did three years ago, that doesn't come close to telling the full story. In 2012, management embarked on a new long-term strategy that refocused operations on core business units and invested in efficiency and cost savings measures. The timing couldn't have been better. When commodities prices crashed in 2014, the company was well-positioned to remain a few steps ahead of the worst impacts.

Although that has resulted in a sideways stock price in the last three years, operations are now a well-tuned machine poised to churn out cash during the next boom in the cycle. It's a scary good thing for investors -- and has been responsible for the stock rally that began in early 2016. 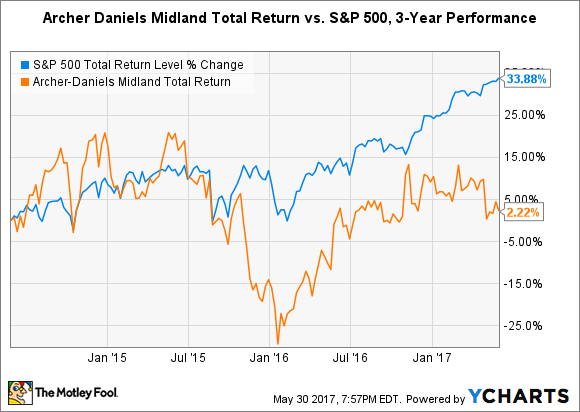 Consider that Archer Daniels Midland improved its gross profit margin to 36% from 2013 to 2016 -- a metric that should continue increasing thanks to growing sales of higher-margin specialty ingredients . Meanwhile, more efficient operations, and a generous share repurchase program have resulted in EPS growth in that same period, despite a 31% drop in annual revenue. Shareholders have been rewarded with a 33% increase in the dividend, to boot.

Operating cash flow and net income are still far from all-time highs, but that has more to do with sector weakness than a company that has lost its way. The point is, by taking care of the things within its control, Archer Daniels Midland may be the first in line to benefit from improving markets. A 51% year-over-year increase in first-quarter 2017 EPS indicates this may already be happening.

Farmers in Brazil and Argentina threw a wrench in a few companies' plans in the first quarter of 2017. Weak commodities prices and strong regional currencies convinced farmers to store record levels of grains on their land, rather than moving it to the next step in the distribution network, in an attempt to boost profits for their hard work. That resulted in a much slower start to the seasonal logistics rituals and much lower volumes than could be reasonably expected for everyone downstream. In other words, farmer gains were Bunge's loss.

The company reported first-quarter 2017 EPS of $0.31, much lower than the year-ago mark of $1.60, as a result of the delay. Of course, "delay" is the keyword here. The grain still exists -- and it still needs to be transported -- which means results will be shifted to later in the year. So, despite the awful start to the year, Bunge still expects strong year-over-year earnings growth in 2017. Full-year 2016 EPS settled in at $5.06. 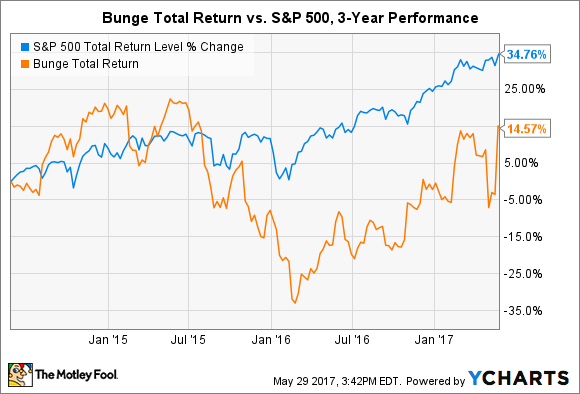 Management did lower full-year 2017 financial guidance as a result of the weak first quarter, but only slightly. Earnings before interest and taxes is now expected to fall in the range of $800 million and $925 million, compared to the prior range of $895 million to $1,050 million. It's important to remember that this is a minor blip in the long term. After all, Bunge still figures to report strong operating cash flow this year and continue increasing its dividend (which has grown 53% since the end of 2013). If selling prices continue to improve in the years ahead, then the company is well-positioned to capitalize on a rebound.

There's no denying that agricultural stocks have traveled a difficult road full of twists and turns in recent years. But not all companies responded in the same manner. The leaders took action by making strategic acquisitions and investing in operational efficiency -- moves that will continue to pay dividends for the long haul. That's what makes FMC Corp., Archer Daniels Midland, and Bunge no-brainer stocks to buy in this sector.