Lithium stocks remained on fire in 2017, with Sociedad Quimica y Minera de Chile (NYSE:SQM), or SQM, taking the crown as the best-performing large lithium stock of the year. It returned 113.9% during the year, topping FMC Corp. (NYSE:FMC) and Albemarle (NYSE:ALB), which returned 64.2% and 68.8%, respectively. The S&P 500 returned 21.8%.

All three stocks of these diversified chemical companies managed to beat their robust 2016 performances, something that didn't surprise me, as I remained bullish on the group in late 2016, even as they were nearing clenching their annual returns of 59.6%, 46.6%, and 56.2%, respectively. Wall Street seemed to be underestimating the growth potential stemming from the electric vehicle (EV) revolution led by Tesla. Indeed, analysts have since raised their earnings estimates for these lithium stocks.

Lithium is used to produce the lithium-ion batteries that are currently the battery technology of choice for EVs. This application is the main catalyst that has lit a fire under lithium stocks in recent years. Why lithium stocks in general soared in 2017

The whopping returns of the stocks of SQM, FMC, and Albemarle in 2017 can primarily be attributed to the companies' improving financial performances, driven largely by strong results in their lithium businesses, though increasing investor confidence has also pushed up the stocks' valuations. Revenue growth in their lithium segments was due to the combination of increases in sales volumes and rising prices for the metal. Moreover, profits in these businesses expanded faster than revenue.

In the first nine months of 2017, revenue in SQM's lithium business jumped 37.7% year over year to $465.2 million, accounting for 29.4% of the company's total revenue. SQM doesn't provide the data needed to calculate the change in profitability for its segments, but we know that its lithium business accounted for 61% of its consolidated gross profit. FMC's lithium revenue increased 20.9% to $234 million over the same period, accounting for 12.3% of total sales, while operating profit for the segment soared 68.9% to $82.6 million, or 21.8% of total segment operating profit. Albemarle's lithium sales jumped 58.3% to $729.3 million in the first nine months of last year, accounting for 32.9% of its total revenue, while this business' EBITDA (earnings before interest, taxes, depreciation, and amortization) surged 66.8% to $328 million, or 51.3% of the total EBITDA for its operating units.

FMC, whose lithium business is the smallest of the three in absolute terms and relative to its business as a whole, had another major catalyst that propelled its stock price last year: In March, the stock surged on news that the company was acquiring the portion of DuPont's crop protection business that the European Commission ruled it must divest in order to merge with Dow Chemical. (This merger closed in August, with the new company called DowDuPont.) This business is widely considered complementary to FMC's existing agricultural business. In return, DowDuPont got FMC's health and nutrition business and $1.2 billion in cash when the deal closed in November.

Why SQM stock particularly outperformed in 2017

SQM stock's performance was lagging the performances of Albemarle and FMC stocks halfway through 2017, but the stock zoomed up last summer. We can attribute this to Reuters' July 5 report that Chinese private equity firm GSR Capital was exploring buying a substantial stake in SQM. 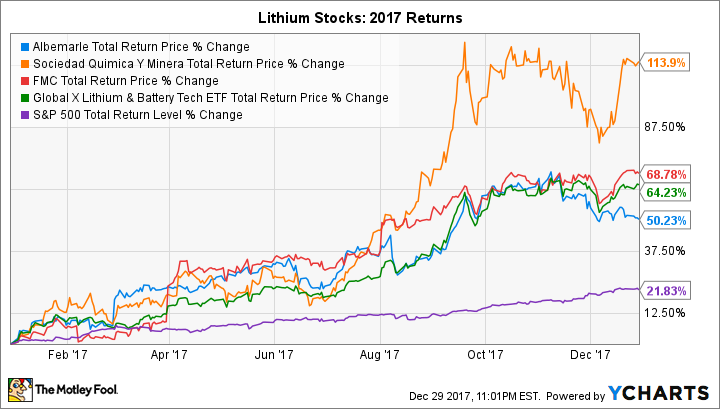 There's good reason to believe that some company (or companies) will be buying a big chunk of the world's second-largest producer of lithium. (Albemarle is the largest producer of the metal.) The former Potash Corp., now named Nutrien, following its merger last month with Agrium, has proposed a sale of its 32% stake in SQM. Moreover, there's reason to believe that a Chinese company would be particularly keen on owning a chunk of SQM. China is hungry for lithium because it's pushing domestic production of EVs. The world's largest auto market views the transition to electric-powered vehicles as necessary to help it cut down on its horrendous air pollution. In fact, on Sept. 11, news came out that China had started exploring a ban on the production of cars fueled by petroleum.

After giving up some of its second-half gains, SQM stock jumped again in December. The catalyst was Sebastian Pinera's election as the president of Chile, where SQM is domiciled. The market is optimistic that Pinera, who takes office in March and ran on a pro-business platform, will be successful at stimulating the country's economic growth.

How does SQM look going forward?

SQM has several catalysts for growth on the horizon that could help keep its stock party going. Like the other major players, it has been expanding lithium production capacity: It's hiking capacity at its Chile operation, has a new brine project in Argentina that should start coming on line in 2019, and recently announced a hard-rock lithium mining joint venture in Australia. Wall Street analysts expect SQM's earnings per share (EPS) to grow at a brisk average annual pace of 32.5% over the next five years -- much higher than the 17.2% and 15% growth rates they foresee for FMC and Albemarle, respectively. Moreover, the stock could get a nice boost if and when the Potash 32% stake is sold and if economic activity picks up in Chile.

That said, SQM remains a stock best suited for investors comfortable with a higher level of risk. It has increased political and financial risks associated with being based in a developing country. More risk-adverse investors are better off sticking to Albemarle or FMC, both of which are based in the U.S.