We're going to look at last year's 11 best-performing utility stocks. Given that winners tend to keep winning, you might find one or more stocks here that you'd consider investing in. 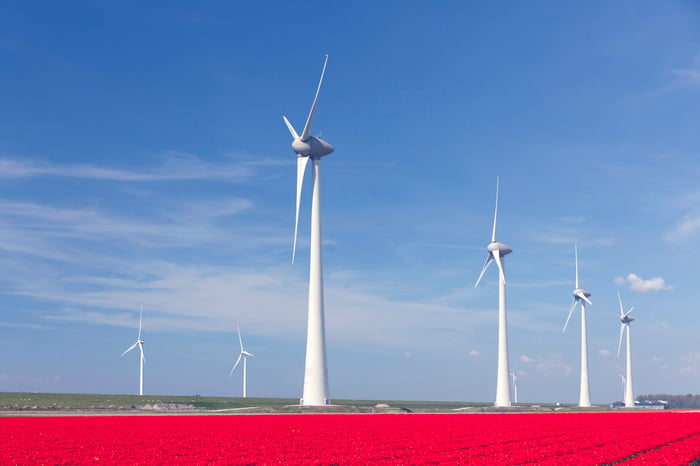 The 11 top-performing utility stocks of 2019

The stocks are ranked based upon their returns last year. To be included on the list, they had to be large caps (i.e., a market cap of at least $10 billion) at the time of this writing. This criteria was included because most investors in utilities are looking for stable, well-established companies.

Two Brazilian stocks are among the big winners

Two Brazilian stocks -- water utility Sabesp (No. 1) and electric utility Eletrobras (No. 4) -- made the winners' list. Brazilian stocks got a big boost from the election of Jair Bolsonaro as president of the South American country. Investors are optimistic that Bolsonaro, who took office on Jan. 1 of last year, will enact market-friendly reforms.

While these two stocks were winners last year, you'll see in the chart that they've both underperformed the market over the last decade. Moreover, Eletrobras had a negative return over this period.

These stocks have been volatile largely because they're based in Brazil. The country is an emerging market, and this brings additional political and financial risks relative to developed markets. Sabesp's volatility has also stemmed in part from Brazil's history of frequent and severe droughts.

These stocks are only suited for investors who are comfortable with higher-than-average volatility and risk relative to U.S. utility stocks.

Five of the companies can best be classified as electric utilities: The Southern Company (No. 2), Eletrobras (No. 4), Entergy (No. 5), NextEra Energy (No. 7), and AES (No. 8). The Southern Company owns and operates electric utilities in three southern states, natural gas utilities in four states, a power-generation company serving wholesale customers across the country, and a distributed energy infrastructure company.

Eletrobras is a Brazilian utility, as mentioned above. Entergy's primary operation is producing and distributing electricity to customers in Arkansas, Louisiana, Mississippi, and Texas. It also distributes natural gas in New Orleans and Baton Rouge, Louisiana.

Industry giant NextEra owns two electric companies in Florida. Moreover, it's the world's largest generator of renewable energy from the wind and sun. And AES's primary business is generating and distributing electricity in 14 countries.

Aqua America will likely soon not be a water utility pure play. Once it closes on its acquisition of natural gas utility Peoples, it expects its U.S. regulated rate base to consist of about 70% water and wastewater and 30% natural gas.

Diversified utilities also place a trio on the list

Brookfield Infrastructure Partners is an infrastructure company, which is a broader category than a diversified utility. It touts itself as "one of the world's largest owners and operators of critical global infrastructure networks that facilitate the movement and storage of energy, water, freight, passengers and data."

Sempra is best considered a hybrid diversified utility/energy company. It owns gas and electric utilities that serve the southern California market (Southern California Gas and San Diego Gas & Electric), an electric utility in Texas, and an electric utility in South America that provides service to customers in Chile and Peru. Its energy operations include Sempra LNG, which develops and builds natural gas liquefaction facilities, and IEnova, which develops, builds, and operates energy infrastructure in Mexico.

National Grid, based in the United Kingdom, has regulated gas and electric operations in its homeland and in the Northeastern U.S.

Are any of these utility stocks good buys in 2020?

Brookfield Infrastructure Partners, NextEra Energy, and American Water Works are worth considering buying, in my opinion. All three have great track records of annual dividend increases.

Top things to like about Brookfield: Its dividend is yielding an attractive 3.9%, and the company is projected to grow earnings at a robust 11.1% average annual rate over the next five years (the best on the list).

Top things to like about NextEra: Its regulated operations are in a state with a growing population, it's a great play on the growth of renewable energy, and it's projected to grow earnings at a solid 8% average annual pace over the next half decade.

As for American Water, it has a top risk-reward ratio. The traditional water utility industry is probably the most stable industry. And the company's industry-leading size and geographic diversity give it an advantage in acquisitions in what's a rapidly consolidating industry.