Investors might be aware that shares of Tesla (NASDAQ:TSLA) have been soaring lately, having more than doubled since the beginning of 2020. While some of that has been fueled by short sellers getting squeezed and very optimistic analyst opinions, healthy operating results are certainly playing a role, too.

That operational strength extends to the automaker's battery manufacturing business. In fact, Panasonic noted that the battery joint venture with Tesla generated its first-ever quarterly profit in the fourth quarter of 2019. That was interpreted as a signal that other massive battery factories in development around the globe could become profitable, too. That was all it took to send shares of major lithium stocks soaring today.

Shares of Livent Corp (NYSE:LTHM) led the pack with gains of up to 18.6%, followed by a rise of as much as 11.1% for Sociedad Quimica y Minera (NYSE:SQM). Shares of Albemarle (NYSE:ALB), the world's largest lithium producer, jumped 10.3%. 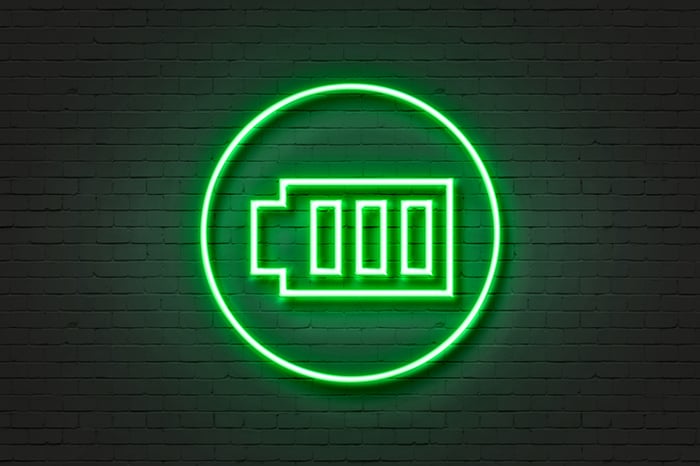 Major lithium stocks have struggled in recent years as investors have questioned their status as growth stocks and grappled with notable market headwinds. Producers ramped up output a little too quickly beginning in 2018, which weighed on selling prices for both lithium carbonate and lithium hydroxide in 2019.

Livent, the smallest of the trio, bucked that trend and plowed ahead with expansion efforts in an effort to grab market share. The company's guidance expected second-half 2019 lithium production volumes to grow 30% compared to the first half of the year. It remains on track to complete a project for 9,500 metric tons of LCE in Argentina by the end of 2020.

While the sudden optimism in battery markets is unlikely to force Albemarle or SQM to backtrack on their plans for curtailment, it might be enough to lift selling prices in key markets, namely China, Australia, and South America. That could help to lift operations of the three major lithium producers in 2020, although they aren't exactly in poor shape.

To be blunt, the sudden optimism for lithium markets is somewhat ironic. Major lithium producers have been calmly arguing for years that global lithium-ion battery production was about to witness a step-change in output. They had the data to support that argument, since they had signed up major battery customers to large, long-term supply deals. But investors mostly ignored lithium miners until Panasonic and Tesla confirmed it.

That said, investors can't become overconfident. Lithium producers have struggled with bottlenecks and delays at conversion facilities (which convert lithium carbonate into lithium hydroxide), and a slowing economy in China can still have a major impact on global supply and demand. But considering the market leaders have navigated recent headwinds with poise, investors might be willing to give them the benefit of the doubt.