The London Metal Exchange (LME), one of the world's largest metals and commodity exchanges, is the latest to get infected by the coronavirus pandemic: LME has shut down its trading ring for the first time since World War II and moved to digital trading. That's one reason why copper prices have tumbled double digits to lows not seen since 2016 and copper stocks have swung wildly in recent weeks.

Some are worried about a copper price meltdown as fears of a recession, coupled with concerns about the efficacy of LME online trading, loom large. Others believe the latest coronavirus stimulus in the U.S. could spur consumption and reverse the fortunes for copper stocks.

It might, however, be too early to get excited about copper stocks.

This is the first time that the LME will go fully digital, a move it had to make after a trader on the floor tested positive for coronavirus. During World War II, the full exchange was shut down for several years in the absence of an electronic trading alternative. The LME uses the traditional open-outcry trading floor, or The Ring, where traders sit in a circle and shout out buy and sell orders for metals to set global benchmark prices for base metals like copper, aluminum, lead, and zinc.

Copper is an essential metal, the prices of which are tracked closely to gauge the health of the global economy given the metal's versatility: It's used in almost everything -- infrastructure, construction, power transmission, electronics, and automotive. More recently, copper's integral usage in electric vehicles has spurred global investments worth billions of dollars in the red metal in recent years. 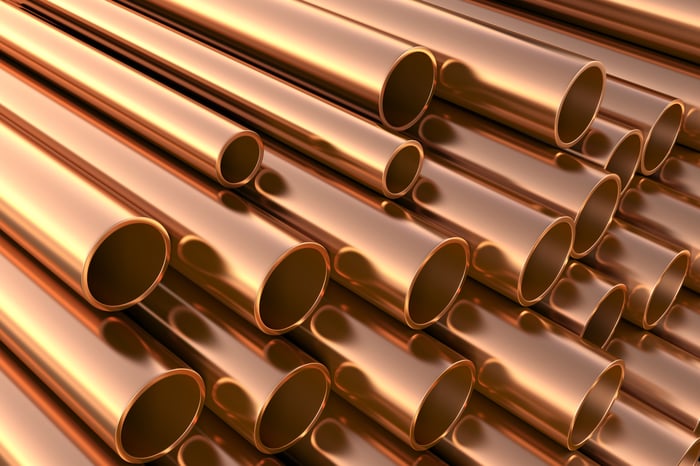 Perceptions have turned around swiftly, though: Until late last year, industry experts anticipated a strong 2020 for copper miners on hopes of an easing trade war and recovery in demand from China. China alone accounts for more than 50% of global copper demand. Some even predicted a copper deficit for 2020. Views have now reversed to a potential surplus that could run into a million metric tons.

With the coronavirus pandemic bringing much of the global manufacturing sector, especially key copper-consuming industries like automotive, to a grinding halt, a demand-and-supply imbalance in the copper market is inevitable. I'd consider any recovery in copper prices now a dead-cat bounce. Although coronavirus lockdowns have curtailed copper production, miners will require a real pickup in demand to resume full production and, more importantly, invest capital on developing and new projects. It's anyone's guess when that'll happen.

The world's largest copper mining company, Codelco, based in Chile, recently said the precipitous drop in copper prices could put some of its key developing projects "at risk." Chile is the world's top copper-producing country.

Closer home, here are the latest COVID-19 updates from some of the key copper producers, including:

BHP Group (NYSE:BHP), one of the world's largest copper producers and owner of a majority stake in world-class Chile-based copper mine Escondida, hasn't said much yet, except that it has excluded contractors from its Chilean facilities. But fellow miners' latest moves offer a glum overview of the copper industry.

No more dividends from this copper miner

Freeport-McMoRan has taken the drastic step of suspending its quarterly dividend to be paid out in May 2020. The company isn't sure when it'll reinstate the dividend, even as management announced aggressive cost reduction plans to maximize cash flows during these challenging times. Freeport also just restricted operations at its Cerro Verde mine in Peru and is "reviewing" plans at "each of its global copper and molybdenum operations," which could mean further production cuts.

Freeport-McMoRan will provide detailed updates along with its first-quarter earnings in April. Here's the update you need to watch out for: Until earlier in March, Freeport-McMoRan was confident of doubling cash flows between 2019 and 2021 on 30% to 40% growth in copper and gold volumes and 25% reduction in copper costs.

Copper contributed only 20% to Teck Resources' revenue in 2019, but the metal's at the crux of one of the miner's largest development projects. The coronavirus pandemic has now forced Teck to suspend construction at the $4.7 billion Quebrada Blanca Phase 2 (QB2) copper mine project in Chile, in which it owns a 60% stake.

Soon after the announcement, Teck shares crashed more than 20%, as QB2 is Teck's most important project under development. With long-life deposits, low costs, and high-grade concentrates, Teck believes QB2 and its further expansion into QB3 could make it one of the world's top five copper producers. With Teck also giving up on an ambitious oil sands project, QB2 remains a key growth factor, one that may hit further COVID-19 hurdles.

A promising copper mine in limbo?

Rio Tinto is primarily an iron ore producer, but its copper and diamonds unit generated $5.8 billion in revenue and operating cash flow of $1.5 billion in 2019. Like its rivals, Rio's focus on copper has gone up in recent years. The coronavirus slowdown has forced Rio Tinto to slow down underground expansion work at Oyu Tolgoi in Mongolia's Gobi desert, one of the world's largest copper and gold deposits. At full production, Rio expects the underground mine to produce 95 thousand metric tons of ore daily, making it the world's third-largest copper mine. Rio jointly owns Oyu Tolgoi with the government of Mongolia, which has a 34% stake in it.

This move comes right after Rio halted production at its primary copper mine, Kennecott in Utah, following an earthquake. Just months ago, Rio announced plans to pump $1.5 billion into Kennecott to extend the mine's life through 2032. I won't be surprised if Rio puts a breather on those plans.

With both production and demand taking a hit and coronavirus pandemic uncertainty spreading its wings, copper stocks seem to be in trouble for now.