Shares of Planet Fitness (NYSE:PLNT) were down 13.8% in July, according to data provided by S&P Global Market Intelligence. The company didn't give investors much to go on during the month, leaving them to worry about the company's financial health and timeline for reopening.

Since July, Planet Fitness reported results for the second quarter of 2020, finally filling in the blanks for investors. 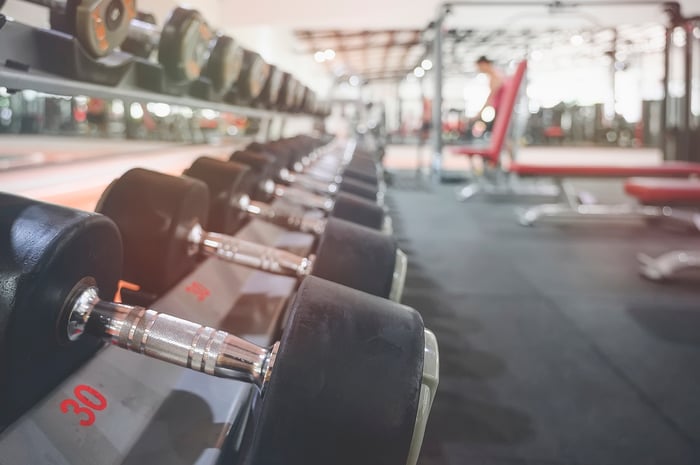 Gym operations have been decimated by the COVID-19 pandemic. They aren't considered an essential service and have been among the slowest to reopen. For its part, Planet Fitness has over 2,000 locations, but almost 600 have been closed for nearly five months now. Unsurprisingly, second-quarter net revenue was down 78% from last year, and the company reported a net loss of $32 million.

Planet Fitness is quick to point out it's still financially strong, and has over $400 million in cash and equivalents. And so far, none of its franchisees have asked for financial assistance. Its membership is also relatively stable -- only down 4% from before the pandemic shutdown. All of this simply means the company is surviving, but it's too early to call it a comeback.

Planet Fitness still isn't back to normal, and there's nothing too exciting for investors yet. Before, the stock traded at a premium valuation; growth stocks like Planet Fitness are often rewarded with this. But until gyms are fully reopened, membership is growing, and new locations are being opened, the stock isn't likely to recapture its previous valuation.

However, assuming the coronavirus eventually gets under control and Planet Fitness returns to normal operations, it could be in a place of competitive strength going forward. CEO Chris Rondeau points out that most of the 40,000 gyms in the U.S. are owned by small, independent operators who may not be able to reopen in the future.