The restaurant industry found itself challenged like never before in 2020. It had to rely upon entirely new ways to do business to survive, but unfortunately not even that was enough to overcome policies that forced consumers to stay at home and not travel. 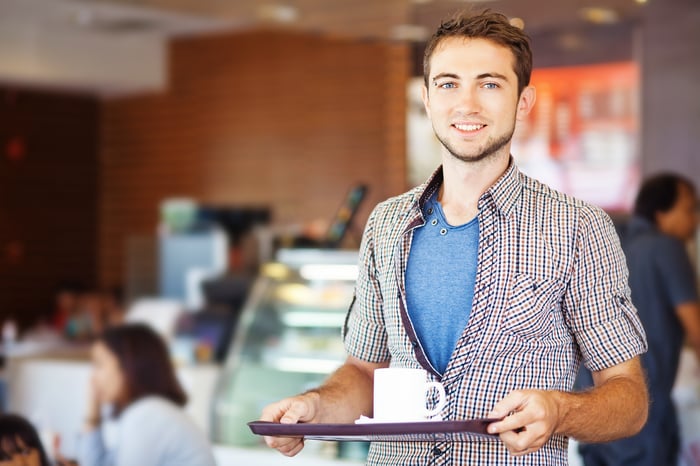 We also learned that size matters. While the operations of the biggest restaurants were also hurt by the pandemic, their tremendous size also allowed them to better weather the storm and continue serving consumers. Many times their stocks were among the best performers in the sector.

Below are the eight biggest restaurant stocks in 2020 and how well they've done for investors.

The owner of Olive Garden, LongHorn Steakhouse, and several other casual and upscale chains, Darden Restaurants (NYSE:DRI) has managed to just break even so far in 2021, but has enjoyed a tremendous rally from the market's March lows with its stock quadrupling in value from the bottom.

It was able to thrive because it had in place an established, robust off-premise business before the COVID-19 outbreak that it was able to lean into, while also having substantial financial resources to fall back on if necessary.

Domino's Pizza (NYSE:DPZ) didn't have nearly the dramatic rebound Darden did, but that's because it didn't fall nearly as far. It only lost 15% at the onset of the pandemic, before the market quickly realized a takeout- and delivery-only business was perfectly primed to capitalize on the new rules.

Same-store sales in the U.S. jumped 17% in the third quarter and were 6% higher internationally, marking the 38th and 107th quarter, respectively, of consecutive comps growth. For international markets, that's over 26 straight years of expansion.

Restaurant Brands International (NYSE:QSR) should seemingly have done better than it has since it operates the Burger King, Popeyes, and Tim Hortons chains, but two of those three businesses were ailing before the pandemic, a factor that impeded their performance during it.

Fortunately, Popeyes has defied gravity for well over a year with the introduction of its chicken sandwich that created a sensation in the fast-food industry. Same-store sales at the chicken chain rocketed 20% higher last quarter on the strength of the sandwich, continuing the trend of double-digit growth since its launch and helping Restaurant Brands to more than double off its March lows.

Because the coronavirus fallout began in China before spreading to the rest of the world, the Chinese franchisee of KFC, Pizza Hut, and Taco Bell, Yum China (NYSE:YUMC), was able to recover from the pandemic earlier than its U.S. counterparts. Its stock is up 25% year to date and didn't really suffer the same sort of meltdown in March that U.S. stocks did.

It's been able to leverage the brand recognition of its international chains to support the smaller restaurants it also operates and is the largest restaurant operator in China with 10,000 locations.

As the parent of the three brands Yum China operates in China, it's only right that Yum! Brands (NYSE:YUM) is also on the list of biggest restaurant operators in 2020. But unlike its offspring, the owner of KFC, Pizza Hut, and Taco Bell has had a more difficult time during the pandemic, and its stock plunged over 45% early on. However, it has almost doubled in value since, leaving the stock up 4% year to date.

Yet like Restaurant Brands, Yum! also has to contend with its chains not firing on all cylinders, and with comps down in the third quarter at KFC and Pizza Hut, it is up to Taco Bell to carry the load.

Chipotle Mexican Grill (NYSE:CMG) has been the best performing restaurant of the group, rising over 54% in 2020, and its shares have tripled from the bottom they hit when the pandemic was declared.

By narrowing menu options and focusing on its drive-thru business, Chipotle has seen its digital business triple. It now accounts for nearly half of its orders. With a plan to add even more "Chipotlanes" to its restaurants, the Mexican-food chain is positioning itself for a post-COVID-19 world.

Like other chains dependent upon the morning commute and an open economy, Starbucks (NASDAQ:SBUX) has had a rough 2020 and its stock is up just 10% for the year, though it has nearly doubled from its nadir.

However, the coffeehouse is prepping for a better fourth quarter and has forecast 2021 to be a stellar year with comparable sales up 18% to 23%. It's made changes to its business, such as adding more curbside pickup locations, and it is beginning to experiment with pickup only stores, which could keep traffic moving along at a fast clip.

Probably of no surprise to anyone, the restaurant chain with the most locations worldwide is also the biggest one by market cap. As with others on this list, McDonald's (NYSE:MCD) hasn't exactly thrived this year, but it has done more than just survive by playing to its strengths.

The drive-thru window, for example, always a prominent fixture for the fast food chain, has taken on an even more important role. McDonald's said in the second quarter it accounted for 90% of the sales it made. It continues to be a vital driver of sales today, helping to push its stock 8% above where it started 2020.