Spectra Energy (NYSE:SE) may be facing several industry headwinds right now, but aside from the blips on the earnings statement, you might not notice. The company continues to see strong results from its cash-generating assets and appears to be on track to maintain its ambitious growth plans despite the hurdles of unfavorable currency issues and some challenges to one of its subsidiary partnerships. Let's take a quick look at the results for the quarter and go over the significant business events in the quarter.

Before those EBITDA and earnings figures freak you out, keep in mind that the company took $722 million in goodwill impairments and special writedowns from its equity stake in DCP Midstream Partners (NYSE:DCP). So the results weren't quite as bad as they sound on paper. For full-year 2015, Spectra Energy's coverage ratio came in at 1.3 times. Also, the decline of the Canadian dollar versus the U.S. dollar had a pretty large impact on revenue and earnings. Here's a quick breakdown of EBITDA numbers by business segment: 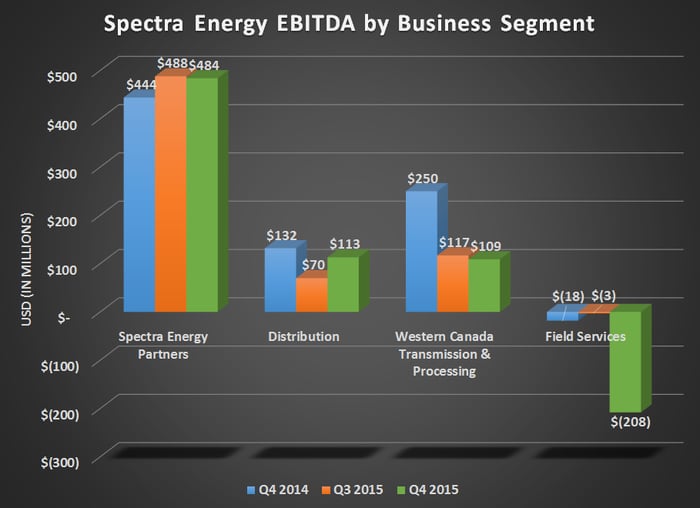 Both the company's Distribution and Western Canada Transmission & Processing segments were affected pretty significantly by currency headwinds. Its field services business unit, which represents its interest in DCP Midstream, was affected by those special-item writedowns. Also, field services was helped in the quarter as Spectra Energy Partners (NYSE:SEP) transferred ownership of two NGL pipelines to it in the first month of the quarter, so Spectra Energy's results are lower as a result.

What happened with Spectra Energy this quarter

What management had to say
Even though some investors might be a little discouraged by the results from this past quarter, Spectra Energy CEO Greg Ebel seemed almost chipper as he highlighted the company's business model and new assets set to come on line:

We continued to build on our solid natural gas transmission portfolio, which generates 90 percent of its revenue from long-term, fixed-fee contracts with high credit-quality customers and little volume risk. As a result of this stability, we are positioned to continue providing reliable and growing dividends for our investors, as demonstrated by the 14-cent per share increase for 2016 that we recently announced. Looking forward, we continue to have more than $8 billion of contractually secured projects in our execution backlog, 75 percent of which are supported by demand-pull customers such as local utilities. The growing demand for our assets, as well as the decisive actions we took in 2015 to strengthen our business, have prepared us well for 2016 and beyond.

Looking forward
For fiscal year 2016, Spectra Energy expects to generate $1.12 billion in distributable cash flow. The slight decline from this year's cash flow is a reflection of further weakness from DCP Midstream as well as a much larger tax bill. Management believes that this will generate enough cash to just cover its dividend for the year. However, these cash flow projections were made several months ago with a much more favorable exchange rate, so investors should keep an eye out for any updated information regarding the company's projected budget and its dividend policy.