What is a Treasury bond?

A Treasury bond, or "T-bond," is debt issued by the U.S. government to raise money. When you buy a T-bond, you lend the federal government money, and it pays you a stated rate of interest until the loan comes due.

These types of securities are fully guaranteed by the U.S. government, so the probability that you won't get your money back is extremely low.

A bond, more generally, is simply a loan that you make to a particular entity -- it could be a corporation, a municipality, or, in the case of T-bonds, the federal government. You make an initial loan amount -- called the principal -- and receive interest payments until the loan comes due in the future or at its time of maturity. At maturity, you should receive your entire principal back plus the final payment of interest you're owed.

Technically, all the securities discussed below are bonds, but the federal government uses the term "Treasury bonds" to refer specifically to its long-term basic security. Treasury bonds are always issued in 30-year terms and pay interest every six months. However, you don't have to hold the bond for the full 30 years. You can sell it anytime after the first 45 days.

U.S. Treasury securities of all lengths provide a nearly guaranteed source of income and hold their value in just about every economic environment. This makes them incredibly attractive during periods of economic uncertainty for investors large and small.

No matter what your age or investing goals, it's a good idea to have at least a small percentage of your investment portfolio in bonds. And Treasury securities -- the bonds issued by the U.S. federal government -- are the safest of high-quality bonds and make a great linchpin for your bond portfolio. Bear in mind that because there's so little risk involved with Treasury securities, their interest payment rates are typically low compared to those of corporate bonds or municipal bonds.

Like all long-term bonds, Treasury bonds carry a significant risk that interest rates will rise during a given 30-year period. Should interest rates rise, your bond value would fall in a corresponding manner. To compensate for interest rate risk, long-term issues often pay a higher rate of interest as compared to shorter-term issues.

There are two common ways to buy individual Treasury securities: from TreasuryDirect, the official U.S. Department of the Treasury website for managing Treasury bonds, or from your online broker.

Note that the interest paid on Treasury securities is exempt from state and local taxes, but it is subject to federal income tax. 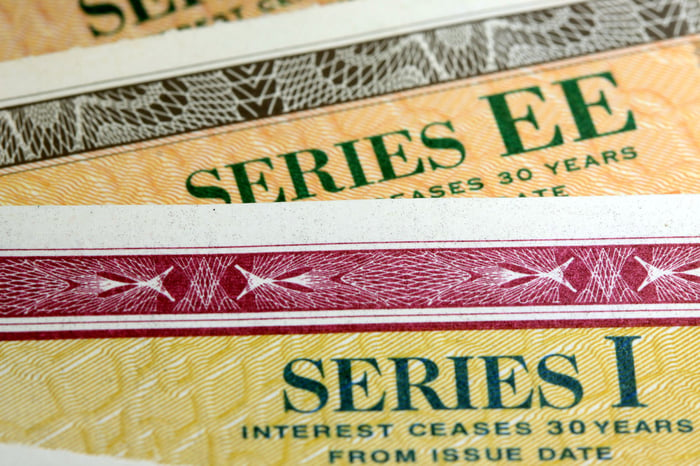 Treasury bills, or T-bills, are the short-term version of Treasury securities and are offered in terms of four, 13, 26, or 52 weeks. A special version of the T-bill, called the "cash management bill," is typically issued in terms of just a few days.

Unlike Treasury notes and bonds, Treasury bills don't make interest payments. Instead, T-bills are sold at a discount. For example, if a T-bill is issued at 1% interest, then an investor would buy a $1,000 T-bill for $990. When the bill matures, the Treasury Department would pay the investor $1,000: the $990 they forked over to buy it, plus $10 in interest.

Not surprisingly, Treasury bills usually pay the lowest relative rates of all the various Treasury securities. As of this writing in August 2021, rates offered at recent auctions ranged from 0.045% for four-week issues to 0.075% for a one-year T-bill, while the 30-year Treasury bond pays 1.89%.

Given that it's possible to find online bank savings accounts that pay more, T-bills are not a great buy if you are looking to save a cash amount that's within the FDIC insurance levels for bank deposits.

Unlike the other types of Treasury securities, savings bonds can only be bought directly through the U.S. government. They are designed as a tool for saving money rather than an investment option. They are issued in two types, Series EE and Series I. The interest paid on these bonds is typically very low, with EE bonds currently paying around 0.1%, but rates are updated often.

A Series I bond is an inflation-protected savings bond that pays a combination of a fixed rate of interest (currently 0%) and a semiannual inflation rate (now around 3.5%) that rises and falls with inflation -- leading to regular rate updates. As inflation has recently picked up significantly, Series I bonds suddenly have become more appealing to the average investor.

You can redeem either type of bond after one year, but if you redeem it before five years have passed, you lose the past three months' worth of interest. Savings bonds mature at 30 years and stop paying interest at that point.

For most investors, Treasury marketable securities make a lot more sense than savings bonds, although Series I bonds are now intriguing due to their inflation protection. Consider making Treasury notes the backbone of your bond investing strategy; 10-year Treasury notes are a great option for bond ladders, which are portfolios of bonds with differing maturity dates. Treasury securities are best kept inside a tax-deferred retirement account since that will keep you from being taxed on the interest payments.

Finally, as you get closer to retirement, increase your allocation of bonds compared to stocks. Once you retire, you'll be able to enjoy the safe and steady flow of income from your portfolio of Treasuries.