Whether you’re looking to strengthen your portfolio through diversification or create new avenues to explosive growth, international stocks can be an excellent component of your investment portfolio.

Expanding international economies, increasing productivity, and improving standards of living are leading to the rise of a new global middle class. These trends suggest that the world’s most dramatic economic growth over the next century will occur outside the United States. Many investors should strongly consider allocating a percentage of their portfolio to stocks in international markets. 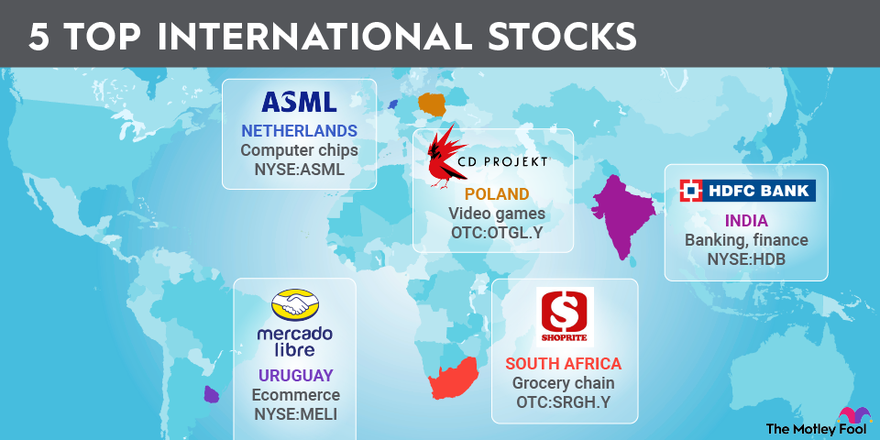 Headquartered in the Netherlands, ASML Holding (NASDAQ:ASML) is one of the world’s leading providers of semiconductor manufacturing equipment. Beyond computers and mobile devices, semiconductors are now essential components for automobiles, appliances, and a wide range of other everyday products and services. Access to chip supplies is also a major national security issue for countries around the world. As a result, there's a big push for localized chip production in the U.S., Europe, and other major markets. ASML is set to play a big role in expanding global manufacturing capacity.

Based in Poland, CD Projekt (OTC:OTGL.Y) has established itself as a strong player in the video game industry. The company is best known for properties including The Witcher and Cyberpunk 2077, but it also operates an online marketplace and sharing platform for digitally distributing games. Demand for interactive entertainment is still poised for huge growth over the long term, and CD Projekt has compelling opportunities as it releases content expansions for existing titles, launches new properties, and taps into emerging trends, including augmented reality and the metaverse.

MercadoLibre (NASDAQ:MELI) is a leading provider of e-commerce and fintech services in Latin America. The company was founded in Argentina and is still growing quickly there, but it actually does most of its business in Brazil and also generates a major portion of its revenue in Mexico. MercadoLibre has continued to increase sales at a rapid clip despite macroeconomic headwinds, and the business’s forefront positions in online retail and fintech point to huge expansion potential as these services become more popular in Latin America.

The United Nations predicts Africa will account for more than half of global population growth through 2050, and Shoprite Holdings’ (OTC:SRGH.Y) status as the continent’s largest grocery chain positions it to benefit from economic and demographic tailwinds. The company is headquartered in South Africa and operates roughly 2,900 locations across 14 countries.

India's largest private sector lender, HDFC Bank (NYSE:HDB), is in a favorable position to benefit as the country’s economy continues to develop. The company has more than 6,300 branches across more than 3,100 cities and towns. HDFC is also a player in the digital payments space and appears poised to benefit from “the war on cash.”

Should I invest in international stocks and funds?

Foreign markets present opportunities that you miss if your holdings are strictly limited to U.S.-based stocks. While foreign companies sometimes come with added risks, international companies tend to be cheaply valued relative to comparable businesses in the U.S.

Many investors prefer to pay more for domestic stocks because business growth in international markets is considered less reliable than growth in the U.S. Another big factor is that most investors simply aren’t as familiar with opportunities in international markets because they have limited personal experience with foreign companies -- and because these businesses tend to receive less coverage from U.S. analysts and media outlets.

Even countries such as Poland, which is home to roughly 38 million people and has actually seen its population shrink in recent years, could expand its gross domestic product (GDP) at rates that significantly exceed the growth rate of the U.S. GDP. Poland is benefiting from industrialization initiatives and a fast-growing tech sector that are boosting most Polish companies.

Political instability is a risk to weigh when investing internationally.

How can I trade foreign stocks in the U.S.?

The easiest (and perhaps safest) way for you to invest in foreign stocks is by investing in exchange-traded funds (ETFs) or mutual funds that include non-domestic companies.

Buying shares of a fund such as the Vanguard FTSE Europe ETF (NYSEMKT:VGK) gives you a position in more than 1,300 companies on the continent, while the iShares MSCI Emerging Markets ETF (NYSEMKT:EEM) confers exposure to more than 1,200 large and mid-size companies from countries such as China, India, Brazil, South Korea, and South Africa. Alternatively, the iShares PHLX Semiconductor ETF (NASDAQ:SOXX) mostly consists of U.S. companies, but Taiwan Semiconductor Manufacturing (NYSE:TSM) stock is one of its biggest components. The fund also includes foreign chipmakers ASML Holding and NXP Semiconductors (NASDAQ:NXPI), among others.

Some foreign companies list their stocks on U.S. exchanges in addition to their home markets, in which case you can simply purchase shares on the Nasdaq or the New York Stock Exchange (NYSE) through domestic brokerages, just as you would for a U.S.-based company. These shares will usually be in the form of American depositary receipts (ADRs) and represent equity stakes equivalent to a predesignated number of shares of the company’s core stock on its home exchange. For example, an ADR share of the Chinese video streaming company iQiyi (NASDAQ:IQ) trading on the Nasdaq is roughly equivalent to seven ordinary shares on the Chinese exchange.

You may also have the opportunity to buy ADR stakes in companies that don’t trade on U.S. exchanges through over-the-counter (OTC) markets accessible through your broker. But be aware that ADRs may not offer privileges such as voting rights conferred by owning a company’s home-market shares, so you may need to be willing to forgo the prospect of voting as a shareholder to acquire stakes in promising international companies.

Opening a global account or foreign brokerage account may cause you to incur fees and taxes and face additional regulations much more than you’d expect from a U.S. equity market. Also, your investment is not protected by domestic securities laws, and you could face difficulty achieving restitution through a foreign court.

The valuations are cheap here, but the upside is enormous.

What risks come with investing in international markets?

Although the rewards of investing in international stocks can be high, there are some risks to consider. Political instability and other developments in the country can devalue an investment, and the values of currencies fluctuate. Particularly in emerging markets, you may have relatively poor visibility into a company's business operations and other factors that affect valuations.

For an example of these dynamics at play, consider the case of Yandex (NASDAQ:YNDX). It is sometimes referred to as “the Google of Russia” and was included as a top international stock to watch in an earlier version of this article, but Russia’s invasion of Ukraine disrupted the company’s outlook. Despite the fact that Yandex had been posting very impressive sales growth and may otherwise have been on track for more wins, geopolitical conditions created massive headaches for investors.

In addition to political instability, international markets often see outsized impacts when economic conditions worsen. High levels of inflation, rising interest rates, Russia’s invasion of Ukraine, and other factors have all combined to weaken the global growth outlook, and some regions are facing intense headwinds.

For instance, many countries in Latin America have seen levels of inflation even higher than the U.S. and relatively weak economic recoveries on the heels of the coronavirus pandemic. While foreign stocks often trade at low price-to-earnings and price-to-sales multiples relative to those of comparable domestic companies, they also tend to be even more sensitive to macroeconomic shifts, and the current backdrop suggests plenty of potential for volatility.

Foreign companies are also more likely to fail to meet the communications and reliability expectations of most U.S. investors. Even foreign companies approved by the U.S. Securities and Exchange Commission (SEC) to list ADRs on U.S. exchanges will sometimes fail to meet reporting expectations, so it’s essential to understand how well and by what means an international company communicates with its investors.

ASML Predicts Enduring Growth in 2023, Is the Stock a Buy?