Monetary policy broadly defines the tools used by a central bank to control the money supply, encourage employment, and manage inflation. In the United States, the Federal Reserve -- also known as the Fed -- is tasked with making monetary policy decisions.

The Fed is said to have a "dual mandate" of maximizing employment and keeping prices stable. It does so by controlling interest rates by increasing or decreasing the supply of money in the economy.

Recent monetary policy actions and goals in the United States
The Federal Reserve has recently set a goal to target a rate of inflation of about 2% per year. That is, it seeks to manage inflation such that prices, as measured by the price index for personal consumption expenditures (basically, a basket of goods or service an ordinary American could expect to buy in any given year), rise no more than 2% per year.

We can observe how the Fed has responded to rising unemployment and recessions in the chart below, which shows the general level of short-term interest rates compared to the unemployment rate. 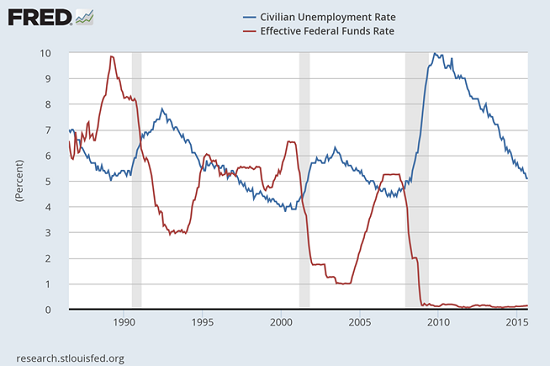 Notice how the Fed increases rates as the economy reaches "full employment" to stave off inflation, and how it decreases rates as unemployment spikes. The grey bars in the chart reflect recessionary periods -- three occasions in which the Fed quickly slashed rates to keep recessionary conditions from worsening.

How monetary policy changes are made
The Federal Reserve generally controls the level of interest rates in the United States by increasing or decreasing the money supply. It has many levers on which to pull, which include:

There are no hard and fast rules in monetary policy, and the Fed increasingly has more tools at its disposal to manage the money supply, and thus interest rates and employment. These three items above are not the end-all, be-all of the tools the Federal Reserve has to use, but they are perhaps the most relevant to controlling monetary policy decisions today.

The Federal Reserve's job of making monetary policy decisions is inherently hard. Critics contend that errors cost the economy in a major way, often pointing to the decision in the early 2000s to keep interest rates too low, for too long, thus stoking what would become a giant real estate bubble and collapse. Unfortunately, these observations can only be made in hindsight, making monetary policy perhaps the world's largest, and most consequential, economic guessing game.