Even blue-chip stocks can get the blues.

Three stocks of large companies that have been around a long time recently hit 52-week lows. Ford (NYSE:F), General Electric (NYSE:GE), and International Business Machines (NYSE:IBM) are struggling, but for different reasons. And they're doing so at the same time the overall market indexes have set new record highs.

With their depressed share prices, are Ford, General Electric (GE), and International Business Machines (IBM) now bargains? Or are they busts? 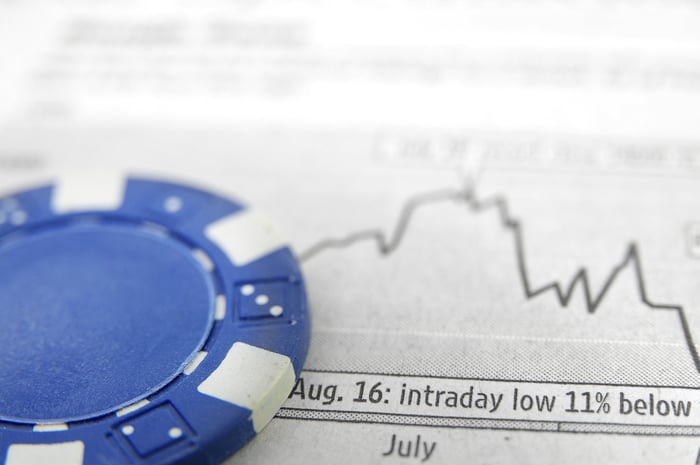 Ford's stock decline began around three years ago. However, it hasn't been as a result of sinking sales: Ford's revenue increased solidly during the period. However, the company's quarterly bottom-line performance has been all over the map.

Probably the biggest factor behind Ford's woes, though, relates to worries about the company's future. The auto industry is changing, with electric cars becoming more popular and huge expectations for self-driving vehicles. Some even think there will be a major shift to "transportation as a service," where fewer people own cars and instead use self-driving taxis or pooled self-driving fleets of vehicles. There's also anxiety that an economic downturn could be on the way.

All of these are valid concerns. However, Ford isn't asleep at the wheel with two of the changes. The company is planning a major joint venture to build electric cars for the Chinese market. Ford also acquired a majority stake in Argo AI earlier this year to jump-start its efforts in developing self-driving cars. As for weathering economic downturns, Ford has demonstrated its ability to navigate tough times better than most auto companies.

If predictions of a shift to a "transportation as a service" model come true, most automakers, including Ford, could be hurt significantly. However, that's a big if -- and even if it does come to pass, the change would be likely to occur incrementally over several decades. For now, though, with its shares trading at seven times expected earnings and a dividend yield of 5.68%, Ford looks like a bargain to me.

After hitting bottom in the Great Recession, General Electric stock enjoyed a nice run through the end of 2016. What happened to change the situation for GE? Disappointment after disappointment for the huge industrial conglomerate.

In January, GE reported mediocre revenue growth for the fourth quarter of 2016. The company followed that up with weaker-than-expected industrial cash flow from operations (CFOA) in the first quarter of this year and lowered its industrial CFOA outlook for full-year 2017 in the second quarter. Longtime CEO Jeffrey Immelt also announced in June that he was retiring, a move that made some investors happy after lackluster financial performance during Immelt's watch.

Even Warren Buffett, known for his buy-and-hold investing philosophy, threw in the towel by selling his entire stake in GE in the second quarter. With the company's revenue and earnings falling and no end in sight to GE's problems, Buffett clearly saw better places to put his investors' money.

GE stock trades at 14 times expected earnings. It also offers a dividend yield just below 4%. Is it a bargain or a bust? Perhaps both. Over the short term, GE's woes could continue. However, the company should be able to grow over the long run, particularly under the new leadership of John Flannery.

GE wasn't the only stock that Buffett decided to sell in the second quarter. The Oracle of Omaha also unloaded a big chunk of his position in IBM. Why did Big Blue lose its attraction for the megabillionaire? I suspect 21 consecutive quarters of year-over-year earnings declines had something to do with it.

When IBM reported its second-quarter 2017 results, none of its business units posted year-over-year growth. Nada. What's even worse, the company is hitching its wagon to technologies that it calls "strategic imperatives" -- cloud, mobile, analytics, social, and security. Although revenue from those areas did increase in the second quarter, the rate of growth is slowing down rather than picking up momentum.

IBM stock now trades at 10 times expected earnings. The company's dividend yields 4.28%. I'm not all that optimistic about seeing the company turn things around quickly, but the low valuation and attractive dividend could keep IBM from falling much lower than it already has. I like IBM as a dividend play, although significant earnings growth could be a long time coming.