The beer industry is huge, global, and competitive. U.S. consumers spend well over $100 billion annually on beer and malt-based products, equating to nearly 30 gallons of consumption per adult per year.

Yet tastes are changing rapidly today, as evidenced by the explosion of craft beer breweries around the country. Consumers are increasingly choosing craft beers, and other new entries like hard ciders and seltzers, over the established mass-market beers that formed the bedrock of the industry for decades.

With that bigger picture in mind, let's take a look at the best beer stocks for investors aiming to take advantage of these major industry trends. 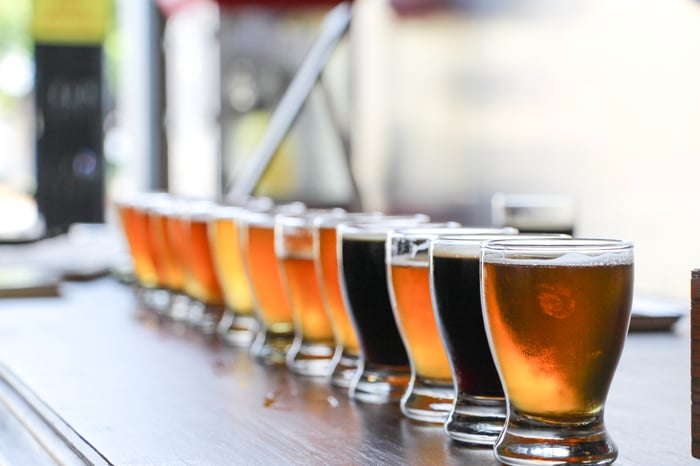 Before we dive into the industry's most attractive names, here are a few important investing terms to know when it comes to evaluating the best beer companies.

The craft beer trend has reshaped the industry in recent years, and investors are seeing evidence of that fundamental shift everywhere they look. Craft Brew Alliance (NASDAQ:BREW), the industry's only remaining pure-play craft beer stock, was recently purchased by Anheuser-Busch InBev. Likewise, Molson Coors (NYSE:TAP) is restructuring its entire business, including a focus shift toward hard seltzer drinks.

These two multinational beer giants are simply reacting to consumers' demands for new brands over established franchises such as Coors, Bud, and Miller. Thus, the main challenge for investors is finding stocks that are positioned well for growth in these new areas, but that aren't burdened with so much risk that another shift in consumer tastes would knock their returns lower.

Given the challenges around marketing traditional beer today, it makes sense to focus your investing dollars on the companies that are most likely to thrive in the current selling environment. Let's take a closer look at the three that stand out as potentially attractive purchases today.

Anheuser-Busch InBev is the industry's dominant company, and although its current corporate form only traces to 2016 when Anheuser-Busch merged with InBev, its roots stretch back hundreds of years to breweries in pioneering cities like Leuven, Belgium and St. Louis, Missouri.

InBev's over 500 million hectoliters of annual beer sales are spread out geographically, with the U.S. region only accounting for 20% of the global total. Latin America contributes 40%, while Europe and Asia each kick in around 20%. The company counts 500 brands in its portfolio, including multicountry hits and those that are more locally focused.

As the leading company in the niche, InBev benefits from economies of scale and efficiencies around marketing, distribution, and commodity purchases that rivals can't hope to match. Balancing those impressive assets is the fact that InBev has the most to lose as the industry fractures and as consumer tastes shift away from traditional mainstays like Bud Light and toward craft beers. Yet InBev has done a better job at responding to these shifts than rival Molson Coors, including with its recent acquisition of Craft Brew Alliance. That makes this beer giant an attractive option for investors seeking global diversity, a huge brand portfolio, and robust dividend income.

2. Heineken Company: owner of brands such as Heineken, Amstel, Red Stripe, and Sol.

Heineken Company is the world's second-largest publicly traded beer stock, with volumes that landed at roughly half of InBev's production in 2018. The Netherlands-based beer giant has a similarly wide portfolio, though, with sales in over 70 countries and 170 breweries spread out around the world.

Heineken has enjoyed impressively consistent volume growth in recent years thanks to strength across its portfolio. The core Heineken beer brand notched its fastest volume expansion in a decade in 2018. Contributions from global winners like Amstel, plus craft-brew Lagunitas, helped push overall growth to 7% compared to modest declines for its multinational peers like Molson Coors. That success implies that Heineken has the tools needed to satisfy shifting consumer beer demand without putting shareholders through volatile swings in sales or earnings.

Boston Beer climbed back into investors' good graces in late 2019. The company dominated the craft beer space for several years but then struggled against a surge of competitors in the craft beer and cider niches in 2015, 2016, and 2017. This competition coincided with shifting consumer demand toward imported beers like those marketed by Constellation Brands (NYSE:STZ), and the two trends led to several years of disappointing depletion rates. Boston Beer's shipments declined 6% in 2017.

The craft beer specialist is doing better lately, though, with depletions on track to expand by nearly 20% in 2019. The gains are primarily powered by recent innovations like hard seltzer and spiked tea, and Boston Beer's success in marketing these launches suggests that the company has some significant competitive advantages when it comes to developing alcoholic beverages and building demand across its network of retailing partners, restaurants, and bars. Like its peers, the company is using acquisitions to tweak its portfolio, including through its recent purchase of the Dogfish Head craft beer franchises.

Its more targeted portfolio makes it riskier than the other two stocks on our list. However, that slim setup allows Boston Beer more flexibility to take advantage of consumer demand shifts. The last few years have demonstrated that these adjustments might take time, but also that Boston Beer has a good grasp on what beer drinkers value. It has a proven track record of profiting from these insights, too, with adjusted earnings on pace to reach roughly $9 per share in 2019, at the high end of the profit outlook range management issued at the start of the year.

Investors who'd prefer not to choose individual stocks in this space might consider buying an index fund instead. As part of the consumer staples sector, beer giants are members of exchange-traded funds (ETFs) like the Vanguard Consumer Staples ETF (NYSEMKT:VDC) or the Consumer Staples Select SPDR ETF (NYSEMKT:VCR), for example. These diversified, low-cost index funds provide some exposure to the beer industry and instant diversification into additional consumer staples stocks.