Money orders can offer big advantages in areas such as security, simplicity, and transparency.

Money orders may not be the most innovative or technologically advanced payment method, but they can come in very handy in many situations. What is a money order, and when should you use one?

What is a money order?
A money order is basically a tool to transfer money or make payments. Think of it as an alternative to a check. However, while checks and money orders can serve a similar function, and they also look quite similar, there are some important differences to consider. 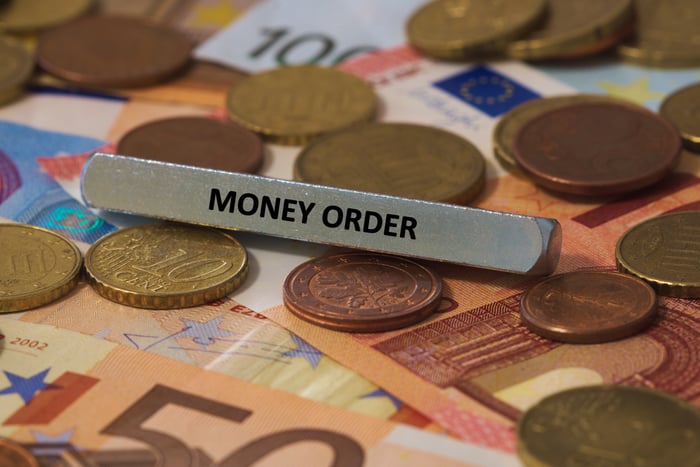 Unlike regular checks, money orders are prepaid. That means they're backed by large agencies or corporations instead of individuals, making them especially valuable because of the safety and reliability they provide.

You can purchase a money order with cash or with a debit or credit card. They're available for sale at banks, credit unions, the U.S. Post Office, and even Wal-Mart stores. Most money orders typically have a $1,000 limit, so you may need to purchase multiple money orders to make payments for bigger amounts. There's also a small cost attached. Money orders from USPS cost a maximum of $1.65 per $1,000, but banks and credit unions can charge considerably more.

After you purchase the money order, you need to fill in the name of the recipient, as well as your name. In many cases you're also required to provide additional data, such as your address and phone number.

Money orders include a receipt, which the purchaser needs to keep until the order is cashed. This receipt works as proof that the holder is indeed the payer of the order. The receipt also includes a tracking number, which can be used to make sure the money got to the right recipient.

When should you use a money order?
In times of flourishing digital payments, money orders may look like an antiquated alternative. However, they can be remarkably useful in some specific situations. For example, many people who don't have a checking account routinely rely on money orders to pay their rent or utility bills.

When trying to send money by mail, money orders are a far safer alternative to cash. Cash can be easily stolen, and the recipient can also misleadingly claim that the money wasn't received after pocketing the cash, leaving the payer in a difficult situation.

But money orders are payable to a specific individual or organization, just like checks, so this feature considerably reduces reduces the risks in case of theft. Besides, payment can be canceled for security reasons when the payer believes the money order has been stolen.

The payer can also monitor when a money order has been cashed, making it much harder for the recipient to deceive the payer by saying that the money order didn't arrive at the specified destination.

Money orders are also especially helpful when the receiver doesn't want to run the risk of being paid with a check that won't be honored because of insufficient funds. Money orders have already been paid with cash upfront, and the instrument is guaranteed by the issuer, which is typically a big, reputable corporation. Unlike with personal checks, there is almost no risk that a money order will bounce back because of lack of funds. On the other hand, money orders can still be falsified, so that's an important risk to watch on the receiver's end.

Money orders are clearly not the most efficient or comfortable payment method available, but they do offer considerable advantages in key areas such as transparency, security, and simplicity. For some specific uses, money orders can be a smart choice.