5G stands for the 5th generation of mobile networking and communication technologies. We use 4G today but 5G is touted to be up to 100 times faster than 4G.

It can also revolutionize the way we communicate, travel (through autonomous vehicles), and consume entertainment (allowing us to download movies to our cellphones in seconds and enjoying augmented reality and virtual reality). 5G is able to enable hyper-connectivity between gadgets, machines, and people in countless permutations and combinations, and it can transform societies, cities, countries, and the world.

All of this is done through a combination of greater wireless capacity, ultra-fast connection, and data transmission speeds, with minimal time lag or latency. 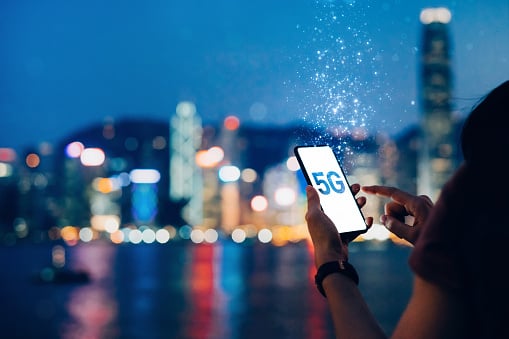 The roll-out of 5G could be a decade-long process, and it will have a huge and wide-ranging impact. Consulting firm McKinsey reports that every second 127 devices are connected to the internet. The number of Internet of Things (IoT) devices is projected to increase from 7 billion in 2018 to 22 billion by 2025.

Leading research firm Gartner predicts that by the end of 2020, there will be 26 times as many connected things as there are humans. And MIT Technology Review believes that between 2020 and 2035, the contribution of 5G to the global gross domestic product (GDP) will be close to the size of India's economy today, a total of $2.7 trillion.

How can you potentially profit from the 5G boom? Here are five smart ways.

This refers to companies like American Tower (NYSE:AMT), Crown Castle, and SBA Communications, all of which are real estate investment trusts (REITs). They rent out space on cell towers to cellphone carriers to mount their antennas, small cells, and other wireless equipment.

Leasing out space on cell towers is attractive because of modest construction costs, low maintenance costs, the non-cancellable nature of the leases, and decent leasing income. The increasing adoption of 5G will result in increased data transmission and consumption, translating into sustained profit growth for the cell tower landlords.

Cell phone carriers are expected to enjoy sustained enhanced profits from the introduction of 5G because customers will have to pay more for services. Choosing among the four better-known carriers in America, namely AT&T (NYSE:T), Verizon (NYSE:VZ), T-Mobile, and Sprint, for 5G investing isn't easy. However, AT&T and Verizon are the biggest among the carriers, and they appear to be competitively positioned.

I like AT&T over Verizon for one main reason. Last September, activist investor Paul Singer's Elliott Management purchased $3.2 billion of AT&T stock. Elliott Management then sent an open letter to AT&T's board that noted among other things that its large investment reflected a deep conviction in AT&T's "extraordinary value opportunity" and that the firm believed that "AT&T can achieve $60+ per share of value by the end of 2021."

My view is that Elliott Management is likely to succeed in holding AT&T's feet to the fire, producing enhanced performance and solid profit growth.

Because there are so many core technology companies that will likely compete in the 5G market, I think investors could be better off buying an exchange-traded fund (ETF) that's focused on 5G rather than buying individual stocks. ETFs to consider include The Defiance 5G Next Gen Connectivity ETF and First Trust Indxx NextG ETF. The former looks more attractive because of its lower expense cost of 0.30% vs. 0.70% for the First Trust ETF.

There are several companies that sell smartphones, wearables, and home technology, but none of them matches up to Apple (NASDAQ:AAPL). Apple is an American innovation juggernaut that has revolutionized consumer technology.

Riding the coattails of Apple to profit from 5G is a smart idea because you are investing in one of the best management teams, corporate employers, and technology innovators in the world, with eye-popping profitability and a fortress-like balance sheet. Most importantly, your investment will benefit not only from Apple's forthcoming 5G iPhones but also from its forays into other promising areas including healthcare, autonomous driving, and satellites.

5. Jack of all trades and master of them all

These telecom companies can use the same computing infrastructure required for 5G networking to provide AI services for smart cities, smart factories, smart healthcare, augmented reality/virtual reality (AR/VR), and cloud gaming. With Aerial, NVIDIA has made a strategic foray into the 5G wireless market. NVIDIA's partnership with industry leaders like Ericsson, Red Hat and Microsoft will help it deliver an end-to-end solution to telecom companies.

I think that the speed, capacity, reliability, versatility, and multi-functionality of NVIDIA's platforms promise to enhance the deployment of 5G, making it truly transformative. This stock is truly a jack of all trades, but instead of being a master of none it's a master of them all.