Mid-cap stocks are businesses with market capitalizations generally between $2 billion and $10 billion. That means that while these companies have a certain amount of strength and scale, they're still small enough to generate big returns in the future, should they grow their way to large-cap status. After all, every large-capitalization stock was once a mid-cap stock, right?

Which mid-sized names offer great entry points today? Well, the coronavirus-led selloff has certainly opened up opportunity across a wide range of mid-cap names. Nevertheless, it's probably best to focus on companies whose businesses can both weather a near-term slowdown and also benefit from long-term trends.

In that light, these three mid-cap tech names look like great opportunities today. 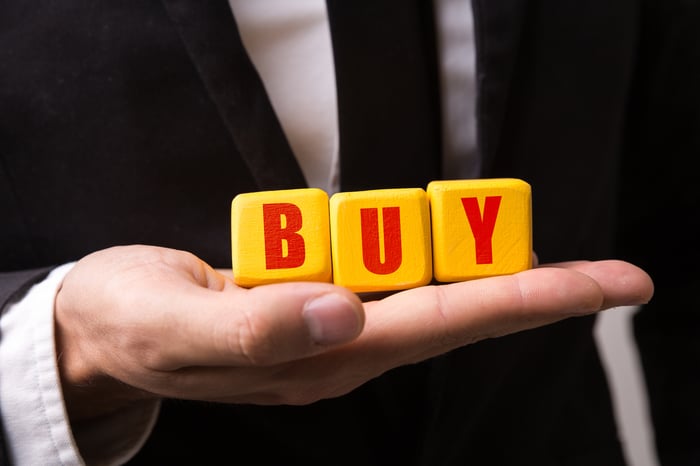 Shares of networking equipment manufacturer Ubiquiti (NYSE:UI) are currently in one of their lulls right now, which has historically been a great time to buy. After nearly hitting $200 per share in late 2019 after the November earnings report, shares fell back to the $140 range after a weaker-than-expected February earnings release, which also coincided with the coronavirus scare. The company's market cap has dipped back into mid-cap status at just under $10 billion.

Ubiquiti has typically been a volatile stock, since it has such a low amount of public shares, with some 87% of shares held by founder and CEO Robert Pera. Not only that, but currently about 19% of the remaining float is shorted.

In the past, when the share price dips like this, management buys back stock, lowering the already-low public share count. In addition, Ubiquiti tends to have uneven quarters, as it largely sells its networking equipment to resellers all around the world with uneven buying patterns. When a strong quarter comes around, short-sellers have to cover, leading to huge surges in the share price. At least this has been the pattern over the past few years.

Recently, Ubiquiti unveiled a slew of exciting new products, including the Unifi Dream Machine, a nifty device that includes a gigabit switch, security gateway, access point, and cloud key (which allows for remote monitoring) in a single device. Ubiquiti also officially released its LTU family of service provider equipment, based on a proprietary high-speed chipset that has been years in development.

Ubiquiti doesn't sell much equipment to China, though it does have manufacturing there. However, during the trade war, the company diversified its manufacturing into both Taiwan and Vietnam, according to its June annual report. In addition, Ubiquiti has a unique and extremely profitable business model with operating margins in the mid-30% range and very little overhead costs.

Therefore, while the coronavirus may complicate the near term, Ubiquiti has the financial strength to power through while further decreasing its share count. If nothing else, more people staying or working from home could increase the importance of fast digital connections, which is Ubiquiti's specialty.

Recent initial public offering OneConnect Financial Technology (NYSE:OCFT) has been incredibly volatile since going public in mid-December, but still trades about 30% above its IPO price, with a market cap of about $4.4 billion. The Chinese financial technology company, which provides a portfolio of digital tools to Asian financial institutions, recently had its first earnings release since going public, and the results were impressive:

OneConnect still gets heat for the bottom line above -- its rather large and growing operating losses. However, OneConnect is still only in the second part of its four-phase business growth plan, which involves customer acquisition and increasing transaction volumes. That comes before phase three, which is monetizing the customer base and upselling customers to more products once they become "hooked." Phase four will involve increasing margin and profitability while achieving economies of scale.

OneConnect is clearly not disappointing with regard to customer acquisition and growing transactions. Clearly, customers are finding value in OneConnect's products, which encompass customer management and marketing, risk management, product technology, AI customer service, and blockchain-as-a-service, among others.

Investors who practice patience and let OneConnect follow its plan are likely to be rewarded. Management estimates a total addressable market of $120 billion in financial technology spend in China and Southeast Asia by 2023. That compares with just $330 million in OneConnect's 2019 revenue. With a dominant and leading position providing technology to Asian financial institutions, now may be a good time to pick up this Chinese tech giant in the making.

Caboot Microelectronics gets about 80% of its revenue from the semiconductor-related business, supplying leading chip manufacturers with slurries and pads that clean wafers, as well as electronic chemicals used in both the cleaning and etching processes of the semiconductor manufacturing process. While the semiconductor industry is known for wild ups and downs, Cabot's semiconductor business is much more stable. While not immune to the fluctuations in the industry, Cabot's results are far more consistent and tied to the numbers of industry wafers produced, which tends to steadily increase almost every year.

Cabot estimates that its semiconductor-related business will grow 5%-7% over the long-term, as the need for more and more complex chips will grow over time. In addition, Cabot estimates that its performance materials segment, which provides chemicals to help oil pipelines operate more efficiently, will grow an even higher 8%-10% over the next five years as the U.S. continues to build out its energy capacity.

Cabot is a steady grower, and also rewards shareholders with share repurchases and rising dividends. While Cabot's stock has come down along with the rest of the market, its solid position as a provider of mission-critical chemicals to these large and growing industries makes it a safe haven pick. And while the near-term outlooks of the semiconductor and U.S. oil AND gas industries are a bit muddy today, their long-term outlooks remain strong.