The Internet of Things (IoT) -- which includes wearables, connected cameras, smart appliances, and other gadgets -- should rapidly expand over the next few years. Global IoT spending could rise from $800 billion this year to nearly $1.4 trillion by 2021, according to research firm IDC.

In response to those bullish forecasts, some companies overstate their exposure to the IoT market or offer flimsy and speculative business models -- making it tough to split the winners from the losers. 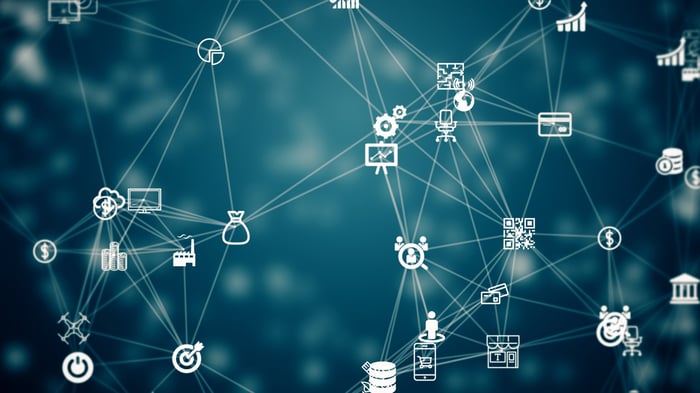 Sierra produces 2G, 3G, and 4G embedded modules and gateways, which are used in M2M (machine-to-machine) communications. It controls roughly a third of the global market for M2M embedded modules, according to ABI Research, making it a "pure play" leader in the IoT market.

Wall Street expects Sierra's revenue and earnings to respectively rise 11% and 49% this year. Sierra's stock already rallied 35% this year, but the stock still trades at a reasonable 19 times next year's earnings.

Texas Instruments manufactures analog and embedded chips for the automotive, industrial, wireless infrastructure, consumer electronics, and enterprise systems markets. Its analog chips are used to collect and process data from a wide variety of devices across the IoT market.

The production of these chips is less capital-intensive than the production of higher-powered application processors, and TI has also been shifting its production from 200mm to 300mm wafers over the past few years, which reduced its average production costs by about 40%.

TI has reported three straight quarters of double-digit annual sales growth, thanks to its strength in the automotive and industrial markets. Analysts expect its revenue and earnings to respectively rise 12% and 31% this year.

Those strong growth figures -- combined with TI's strategy of returning all of its free cash flow to shareholders via buybacks and dividends -- helped the stock rally 33% this year. The stock trades at 21 times next year's earnings, and pays a forward yield of 2.6%.

Cypress sells analog and memory chips for the automotive, industrial, home automation, medical devices, and consumer electronics markets. However, it's made the IoT market a top priority with its acquisitions of embedded chipmaker Spansion in 2015 and Broadcom's IoT business last year.

Cypress has a lot of irons in the fire. A few of its hot markets include chips for crash avoidance and infotainment systems in connected cars, wireless chips for the Nintendo Switch, and USB-C controllers for newer mobile devices.

Cypress' quarterly revenue growth has been slowing down due to tough annual comparisons, but analysts still expect 20% sales growth and 76% earnings growth this year. Cypress has rallied 30% this year, but it still trades at just 13 times forward earnings. It also pays a decent 2.8% forward yield, making it a surprisingly undervalued income play on the IoT market.

Long-term forecasts for the IoT market vary greatly, but most analysts believe that it will reach tens of billions of connected devices within the next few years. Therefore, it would be wise for investors to add a few IoT stocks to their long-term portfolios.

Sierra, TI, and Cypress all represent strong plays in this sector. However, investors who want to spread out their bets across the industry can also check out the Global X Internet of Things ETF (NASDAQ:SNSR), which rallied 25% this year on the strength of the IoT market.