Health insurance. You might consider it a necessary evil. Everyone is supposed to have it. Anyone without it could eventually really wish they had it.

Especially in the U.S., health insurance has become an important component of the overall healthcare system. It has also become a huge industry and a lucrative area for investors. Most of the largest health insurance stocks have trounced the S&P 500 index in total return over the last 10 years. And with aging demographic trends fueling Medicare growth, these stocks could deliver market-beating gains in the future.

Investors looking to profit from the big business of health insurance have plenty of stocks to choose from. But how should you invest in health insurance stocks? There are seven key steps to increase your likelihood of success:

Here's what you need to know about each of these seven steps for investing in health insurance stocks. 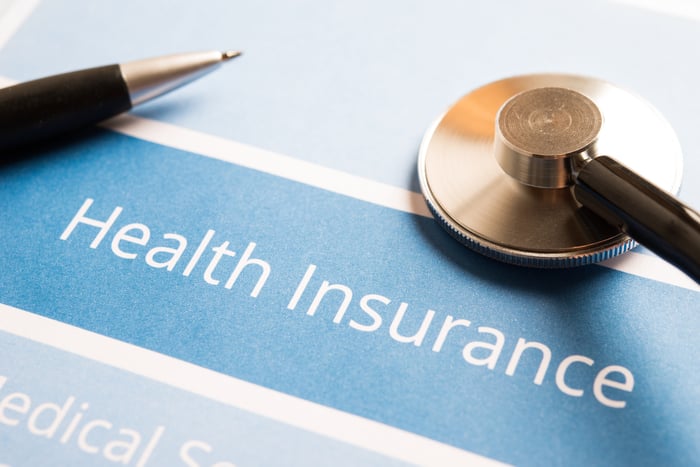 1. Develop a general understanding of the health insurance industry

There are more than 900 health insurance companies in the U.S., according to the National Association of Insurance Commissioners (NAIC). These companies help individuals gain access to medical care and provide financial protection against medical costs beyond the budgets of most individuals.

Medicare is operated by the U.S. federal government, which relies on private health insurers that are named Medicare Administrative Contractors to run the program including several types of health insurance. Today, 14% of Americans are covered by Medicare, although this percentage will increase as more baby boomers reach age 65.

Medicare Part A mainly covers expenses related to hospital stays for Americans ages 65 and over. Most people don't pay anything to be covered under Medicare Part A. Medicare Part B focuses on medically necessary outpatient services and treatments. Individuals ages 65 and over are eligible but must pay premiums based on their income. Health insurers also often offer Medicare Supplement policies, also known as Medigap policies, that provide more benefits than Medicare itself does.

Medicaid health plans are administered by the individual states, with the federal government helping fund the costs of the plans. Medicaid helps low-income individuals obtain healthcare as well as pay for long-term care costs for the elderly and disabled. More than 20% of Americans are covered by Medicaid, according to KFF.

Many states rely on private health insurance companies to operate Managed Medicaid programs in which states contract with companies that receive a fixed payment each month per covered person to provide for the delivery of Medicaid health benefits and other services.

Claim: A claim is a request, usually made by a healthcare provider (although sometimes made by individuals covered by the health insurer), to pay for medical services incurred by a person covered under the health insurer's plan.

Drug formulary: A drug formulary is a list of prescription drugs the health insurer has agreed to cover. Health insurers often have different tiers of coverage with their formularies, with individuals having to cover more of the cost on their own for certain types of drugs.

Dual coverage: This term refers to the scenario in which an individual is covered by both Medicare and Medicaid.

Member: A member is a person who is covered by a health insurance plan.

Premium: A premium is the money health insurers receive from employers or individuals in exchange for health insurance coverage. Premiums are usually paid on a monthly basis.

Deductible: A deductible is an amount of money that insured individuals must pay before an insurance company will pay a claim.

Coinsurance: Many health insurance plans include coinsurance, which is the percentage of the total cost of a covered healthcare service that an individual must pay after meeting his or her deductible.

Reinsurance: Reinsurance is insurance that health insurance companies purchase themselves to limit the amount of risk they take on.

This notably happened over the last few years with the individual health insurance markets mandated by the ACA. Several large health insurers lost a lot of money providing coverage for private individual plans in certain states, prompting them to withdraw from some markets.

Health insurers are also at risk for healthcare fraud. Some unscrupulous healthcare providers can try to submit claims for services that were not performed or falsify claims information in such a way as to increase their payments. Federal laws such as the False Claims Act have been implemented to impose penalties on individuals and organizations that attempt to defraud the federal government and protect individuals (commonly called "whistle-blowers") who report potentially fraudulent activity. However, the complexity of the healthcare claims filing process still makes it possible for some to attempt to game the system.

Because of these risks, health insurers make significant efforts to minimize their financial exposure. Health insurers typically purchase reinsurance policies that put a cap on how much money they have to pay out on claims in a given period. In addition, health insurance companies employ auditors and use software to help identify potential fraud.

4. Know what to look for in health insurance stocks

One important thing to look for in health insurance stocks is something you'd look for with any stock: earnings growth. Solid earnings growth over several years indicates that a health insurer is effectively managing its underwriting risk by setting premiums at rates high enough to make a profit. It also will usually be a good sign that the company is managing its costs effectively.

You will also want to check out how much diversification a health insurer has across different lines of business. For example, a health insurer that primarily focuses on the Medicaid market could be a greater risk of adverse regulatory changes for the Medicaid program. Generally speaking, more diversification is a good thing because it reduces the stock's exposure to events that cause financial challenges, or headwinds, for specific health insurance markets.

As you might expect, larger health insurers are more likely to pay dividends, provide diversification across multiple lines of business, and venture into adjacent businesses outside of health insurance. Health insurers that aren't as large tend to focus primarily on niche markets. However, these relatively smaller health insurers can still deliver strong growth and can be prime acquisition targets for larger companies.

The following table lists the top five health insurance stocks in terms of market cap (the size of the company calculated by the shares outstanding multiplied by the share price):

Here are some important things to know about each of these health insurance stocks.

The company makes around 40% of its health insurance revenue from its Medicare Advantage, Medicare Part D, and Medicare Supplement plans. UnitedHealth's employer and individual business contributes another 30% of total revenue, with the remaining revenue coming primarily from Medicaid plans and the company's international operations.

Anthem is the biggest Blue Cross and Blue Shield (BCBS) plan in the U.S., covering 14 states, including California, Georgia, and Ohio. All BCBS plans are independent licensees of the nonprofit Blue Cross and Blue Shield Association (BCBSA), an association of independent health benefit plans that has provided healthcare coverage to Americans since 1929. Anthem's subsidiaries also enable it to operate in all 50 U.S. states.

Roughly 60% of Anthem's total revenue is generated by its government business segment, which offers Medicare Advantage and Medicare Supplement plans as well as contracting with state Medicaid programs and the Federal Employee Program (FEP). Anthem's commercial and specialty business, which markets products including employer-sponsored and private individual health plans, contributes most of the other 40% of the company's total revenue.

You might be wondering why CVS Health is on the list of health insurance stocks, since the company is best known for its retail pharmacy stores. However, thanks to its $69 billion acquisition of Aetna in 2018, CVS Health now ranks among the top U.S. health insurers.

CVS Health's biggest revenue generator is its PBM business, which kicks in more than half of the company's total revenue. The company's retail pharmacy and long-term care (LTC) pharmacy operations contribute nearly one-third of total revenue. Aetna provides most of the remainder of CVS Health's revenue. Nearly 80% of Aetna's total medical membership comes from its commercial business, which offers employer-sponsored plans and private individual plans.

Until late 2018, Cigna was nearly exclusively focused on providing health insurance products. The company's acquisition of Express Scripts, though, made Cigna a major player in the PBM market. Prior to being bought by Cigna, Express Scripts was one of the largest PBMs in the U.S.

Humana has been the target of several acquisition rumors, including talk of being acquired by Walgreens Boots Alliance or Walmart. The company was also rumored to be interested in buying Centene. None of those rumors panned out. But Humana did complete a big deal in 2018 by buying a 40% stake in Kindred at Home and Curo Health Services, which combined to create the largest home health and hospice provider in the U.S.

The company makes roughly three-quarters of its total revenue from its Medicare Advantage and Medicare Supplement plans. Another 13% of revenue comes from Humana's group and specialty segment, which markets health insurance to employers and administers Tricare health insurance plans for the U.S. Department of Defense.

As with any investment decision, you'll want to carefully consider the potential benefits and risks before investing in health insurance stocks. There could be significant political uncertainties surrounding proposals to change the U.S. healthcare system in ways that could seriously threaten the health insurance industry.

Diversification is always a smart approach to investing. Make sure you don't put too much money into any one stock -- or any one industry, including the health insurance industry. Investors have different views on how much of their holdings should be in one industry. But you'll probably want to invest no more than 20% of your total portfolio in the healthcare sector and no more than 5% in health insurance stocks.

Speaking of a fast-changing landscape, you'll want to reevaluate your investment decisions regularly, perhaps on a quarterly basis. Any major proposals for changing Medicare, Medicaid, or private health insurance in the U.S. could dramatically impact health insurance stocks.

Beyond these macro-level changes, also keep tabs on the performance of any health insurance stock you've bought. Don't worry too much about short-term stock price fluctuations. Do pay attention, though, to the business fundamentals of the companies you invest in.

For example, if the medical loss ratio of a health insurer changes significantly, find out why that's the case. A ratio that's too low could jeopardize the company's compliance with federal regulations.

Now that you know the seven steps for how to invest in health insurance stocks, there's only one thing left to do: Start investing! While there are risks related to significant regulatory changes, health insurance stocks should generate solid long-term returns, especially as Medicare grows with a larger senior population.