The bull market in stocks keeps on moving ahead, and the Dow Jones Industrials (DJINDICES:^DJI) have kept up their strong gains with a rise of about 8% so far in 2017. However, not every stock in the Dow has managed to share in the overall market's gains. Among the average's worst-performing components are Verizon Communications (NYSE:VZ), General Electric (NYSE:GE), and Chevron (NYSE:CVX), and unless conditions in their respective industries change for the better soon, these three Dow stocks could well find themselves at the bottom of the list for the full 2017 year down the road. 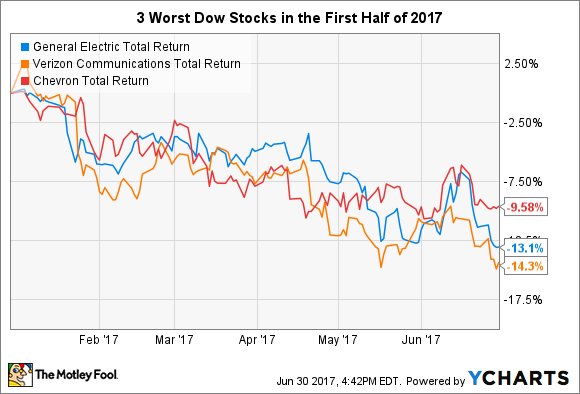 Verizon Communications has been having an extremely tough time lately, and even the telecom giant's 5% dividend yield wasn't enough to prevent it from losing almost 15% on a total-return basis in the first half of 2017. Competitive pressures have been increasingly difficult for Verizon, and the company has had to make aggressive moves to try to retain its competitive advantages in the space. A bidding war for the spectrum assets that Straight Path Communications owns was just one element of the broader fight in the industry toward maximizing network quality and being first out of the gate with new advances.

The problem that Verizon faces is that lower-priced rivals have caught up to Big Red's offerings, and that will make it increasingly difficult for Verizon to charge premium prices for its wireless service. The telecom has had to offer unlimited data plans to keep up with its more aggressive industry peers, and even so, declines in the number of subscribers recently show how fragile Verizon's customer loyalty is. Verizon's 5G network development will have to go well for the company to re-establish its advantages and regain upward momentum. 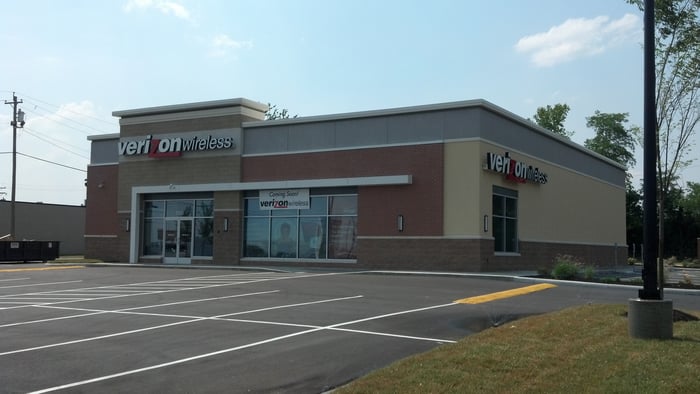 General Electric has also seen substantial declines in its stock price, and the dissatisfaction has led to the departure of a key executive. CEO Jeff Immelt stepped down in June amid discontent that the conglomerate's relatively late push into the oil and gas sector came at just about the worst possible time in hindsight. Now, it will be up to incoming CEO John Flannery to use his experience at GE Healthcare to try to turn around the entire business.

Some investors remain bullish about GE's energy initiatives, especially as the planned purchase of oilfield services giant Baker Hughes (NYSE:BHI) appears more likely to happen in the months ahead. Yet with the uncertainty of a leadership change, many investors are taking a wait-and-see approach. Between its business concentrations in power and renewable energy as well as its core industrial units, GE's future prospects will depend on how well its vision lines up with the broader business trends in the U.S. and globally.

Finally, Chevron has lost almost 10% of its value, and the reason for the drop is fairly clear: Crude oil prices haven't behaved well in 2017. After starting the year in the $50s on a per-barrel basis, crude has fallen into the mid-$40s, and the ripple effects have been felt across the industry. Even though Chevron is an integrated oil major with operations like midstream transport, refining, and marketing that aren't quite as sensitive to the ups and downs of crude prices, investors have nevertheless focused on the negative impact on the upstream exploration and production industry that comes from falling oil prices.

Operationally, Chevron has worked hard to sustain its success, with higher production, lower costs, and reduced needs to spend on capital expenditures. Yet if oil prices remain $10 or more per barrel lower than they started the year, then it will inevitably have a negative impact on operating cash flow. Given that Chevron maintains one of the highest dividend yields in the Dow and also still has to be able to spend freely to develop existing and new energy assets, a rise in energy markets is crucial for Chevron to bounce back and reach its full potential.

The Dow has climbed so far in 2017, but these three stocks are getting left behind. Only by reversing course and finding new opportunities for growth can these three Dow components catch up to their peers and start to contribute toward the broader bull market in stocks.