Decentralization was a key part of the original vision for cryptocurrencies. To accomplish that, there needed to be a way to confirm transactions without the involvement of financial institutions. The first solution to this challenge was called proof of work.

Proof of work (PoW) is a form of adding new blocks of transactions to a cryptocurrency's blockchain. The work, in this case, is generating a hash (a long string of characters) that matches the target hash for the current block. The crypto miner who does this wins the right to add that block to the blockchain and receive rewards.

Cryptocurrency started with proof of work since it's the consensus mechanism used by the first cryptocurrency, Bitcoin (CRYPTO:BTC). It's well-known for its security but also for inefficiency and a heavy environmental impact. 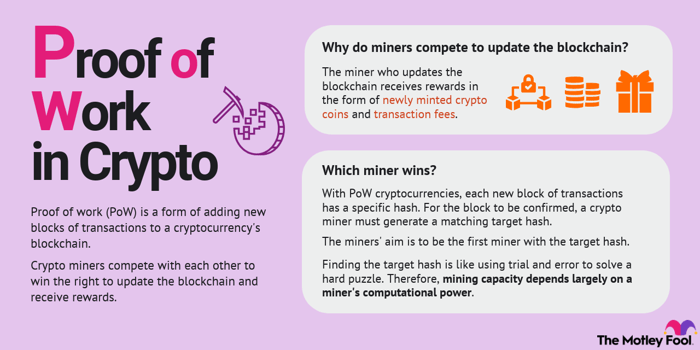 Proof of work and proof of stake are the most widely used consensus mechanisms.

How the proof-of-work model works

The proof-of-work model is a consensus mechanism used to confirm and record cryptocurrency transactions.

Every cryptocurrency has a blockchain, which is a public ledger made up of blocks of transactions. With proof-of-work cryptocurrencies, each block of transactions has a specific hash. For the block to be confirmed, a crypto miner must generate a target hash that's less than or equal to that of the block.

To accomplish this, miners use mining devices that quickly generate computations. The aim is to be the first miner with the target hash because that miner is the one who can update the blockchain and receive crypto rewards.

The reason proof of work in cryptocurrency works well is because finding the target hash is difficult but verifying it isn't. The process is difficult enough to prevent the manipulation of transaction records. At the same time, once a target hash is found, it's easy for other miners to check it.

Example of proof of work

Here's an example of how Bitcoin uses proof of work to maintain the integrity of its blockchain.

When Bitcoin transactions occur, they go through a security verification and are grouped into a block to be mined. Bitcoin's proof-of-work algorithm then generates a hash for the block. The algorithm Bitcoin uses is called SHA-256, and it always generates hashes with 64 characters.

Miners race to be the first to generate a target hash that's below the block hash. The winner gets to add the latest block of transactions to Bitcoin's blockchain. They also receive Bitcoin rewards in the form of newly minted coins and transaction fees. Bitcoin has a fixed maximum supply of 21 million coins, but, after that, miners will continue receiving transaction fees for their service.

The proof-of-work algorithm used by Bitcoin aims to add a new block every 10 minutes. To do that, it adjusts the difficulty of mining Bitcoin depending on how quickly miners are adding blocks. If mining is happening too quickly, the hash computations get harder. If it's going too slowly, they get easier.

Proof of work vs. proof of stake

Proof of work was the first cryptocurrency consensus mechanism. An alternative, proof of stake, came out in 2012 with the launch of Peercoin (CRYPTO:PPC). It chooses transaction validators based on how many coins they've staked, or locked up, to the network.

Because proof of stake doesn't require nearly as much computing power as proof of work, it's more scalable. It can process transactions more quickly for lower fees and with less energy usage, making proof-of-stake cryptocurrencies more environmentally friendly. It's also much easier to start staking crypto than mining since there's no expensive hardware required.

However, proof of work is more proven from a security perspective. One potential problem with proof of stake is that parties with large crypto holdings could have too much power, which is an issue that proof of work doesn't have.

Advantages and disadvantages of proof of work

Here are the biggest advantages and disadvantages of proof of work:

Here are some of the notable cryptocurrencies that use proof of work:

Proof of work was the consensus mechanism of choice for early cryptocurrencies that needed a secure, decentralized way to process transactions. Although proof of stake has since emerged as a less energy-intensive alternative, proof of work is still used by many major coins.