George Kesarios
(GKesarios)
Author Bio
I focus mostly on technology stocks, but I also venture out to other sectors. Mostly focusing on valuations instead of what makes companies tick. My greatest challenge, finding stocks that can double in 12 months or less. Follow @GKesarios

Warren Buffett has been able to outperform the market for so many years because he buys companies at a fair price. Looking at the long-term picture, the multiple you pay today makes a big difference in the long term. While innovative companies and exotic technologies make investors excited, be very careful before buying those companies for the long term.

P/E isn't enough information alone to determine if you're overpaying for a stock because earnings are susceptible to cyclical swings. In fact, you typically buy a cyclical stock when the P/E is high and sell it when it's low.

But, one metric that might give you insight about whether you're overpaying for a stock that's susceptible to cyclical swings is the price-to-sales ratio. Basically, the price-to-sales ratio indicates the multiple of annual revenue you are paying for a stock. It's not a lot of information, but when coupled with other information and with some historic content, it may help you avoid overpaying.

Let me give you some examples 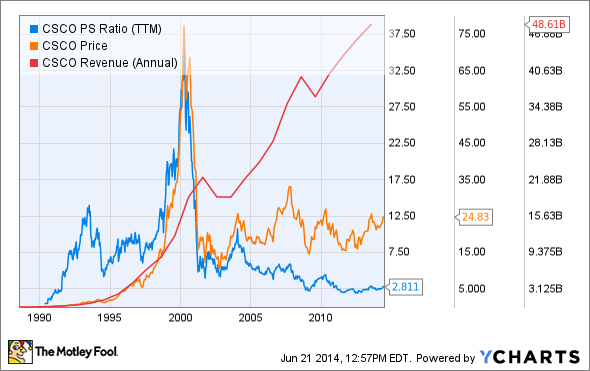 Cisco (NASDAQ:CSCO) is a textbook case of how to use the price-to-sales ratio to avoid buying stocks that will underperform over the next decade.

At the height of the market mania in late 2000, the market valued Cisco as high as 35 times revenue. The logic is that high-growth disruptive stocks deserve a premium. However, several months before 2002, when the market realized that Cisco's revenue growth could not be sustained, the stock crashed from a high of nearly $75, landing around $15 per share.

Cisco has actually doing great ever since, as both revenue and EPS has been climbing. However, shareholders who bought the stock in 2000 are still losing money. Presently, Cisco trades near 1/3 of its all-time high. Today, the stock trades at a down-to-earth price-to-sales ratio of 2.8, but the fundamentals still haven't caught up with the nominal price of the stock in 2000. 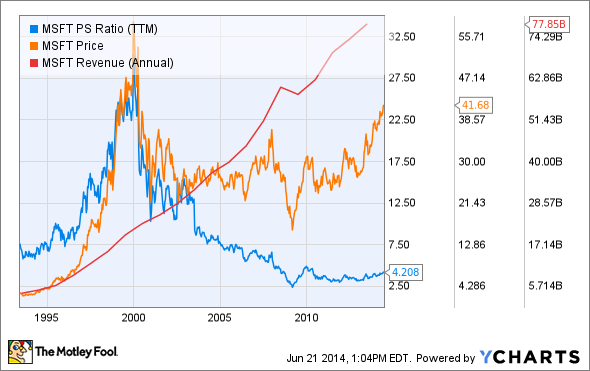 Like Cisco, Microsoft (NASDAQ:MSFT), at one point, had a price-to-sales multiple as high as 28. In Microsoft's case, its revenue growth never slowed, and similar to Cisco, the fundamentals have never been better. However, investors who bought the stock when the P/S ratio was at its high are still losing money.

Two stocks that never had an irrational Price/Sales ratio 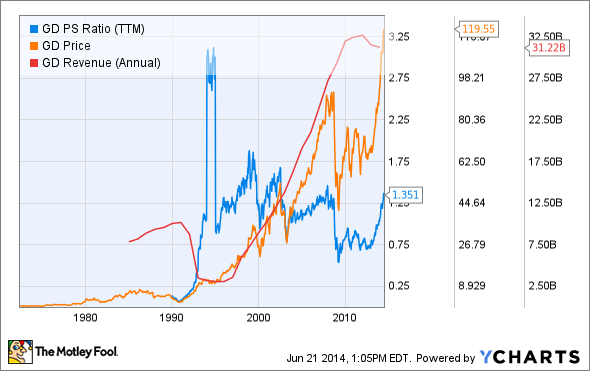 General Dynamics has never had an irrational P/S ratio. As a result, the stock was never priced at impressive valuations and has always been considered relatively safe. Note that the P/S ratio in this case never passed three (in the mid 1990s), and even then it during the company's reorganization. The result was that there were no losers in General Dynamics -- anyone who ever bought this stock is making money. 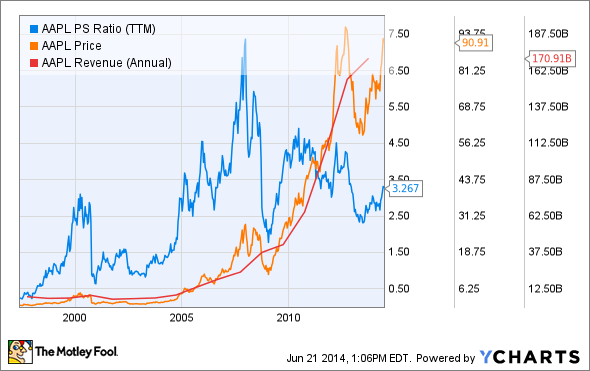 Believe it or not, Apple also never had an irrational P/S ratio. In fact, the highest it ever reached was near 7, at about the time the iPhone came out. Today, the stock's P/S ratio stands at a modest 3.26, and like General Dynamics, there are no losers in Apple stock.

When investors pay an irrational P/S ratio, they pay for irrational growth
When investors buy stocks with high P/S ratios, those stocks need to grow revenue at least 30%-40% on a yearly basis for many years into the future. This is because investors are paying a big premium today for growth that is expected to happen in the future. But, with any deviation from future growth expectations, the premium paid today may no longer be deserved. As a result, and because an irrationally high P/S ratio cannot be maintained by an increase in revenue growth, the stock is likely to collapse.

That's what happened to Microsoft and Cisco. But, even after the initial collapse, both stocks were still extremely expensive, and it took over a decade for the fundamentals to catch up to the nominal price of the stock. As a result, investors holding these stocks for the long term have either underperformed or are still losing money.

Some high Price/Sales ratio stock to keep your eye on
Voxeljet currently has a P/S ratio of 15 with a projected P/S ratio for 2014 of 14. Keep in mind this stock traded as high as $70 in November 2013.

What is a normal P/S ratio?
This is a difficult questions to answer, as there is no concrete answer. However, as the chart from Standard and Poor's illustrates, the long-term median average of the S&P 500 has been about 1.5, with the current being 1.69.

Bottom line
The P/S ratio is not the only financial metric by which to judge stocks. There are many other metrics, but history has shown that, when investors pay an abnormally high P/S ratio, it can be dangerous if revenue growth can't outpace the multiple contraction of the ratio. As the case of Cisco illustrates, having paid an irrational P/S ratio, even after 15 years the fundamentals might still be behind the curve of the nominal price of the stock.