It didn't seem to matter whether the stocks had been doing well, like Discover's (which is still up more than 35% year to date), or poorly, like Barclays' (down about 7% year to date). None had been the subject of major negative news during the month, although you could argue that Brexit uncertainty may have affected European banks' shares more than the others. But a potential Brexit is likely to have broader effects on the global economy, and that was just one of the issues weighing on bank stocks during the month. 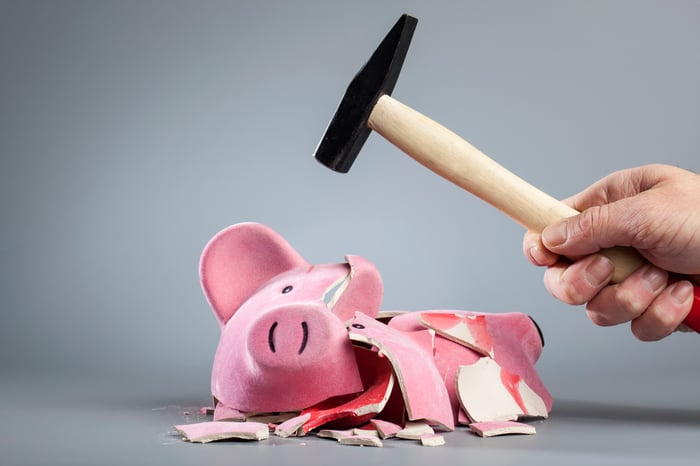 These stocks' performances looked surprisingly similar during the month: 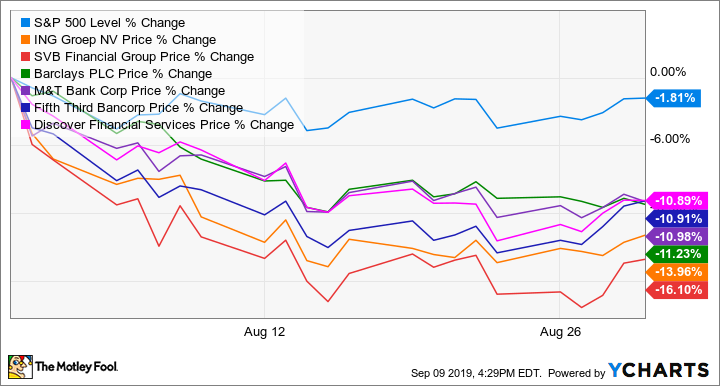 Share prices followed the same pattern: a steep drop at the beginning of the month gradually eased off as it progressed. This was seen across the banking sector and was a result of a number of factors.

The first big catalyst for bank stocks' August decline occurred on the last day of July, when the Federal Reserve board voted to cut the federal funds rate by a quarter percentage point. As a result, interest rates are now set to hover between 2% and 2.25%. That's good for borrowers, because the costs of borrowing for credit cards, loans, and mortgages will be lower. It's not so good for the banks that issue those cards, loans, and mortgages, which will now see their margins contract on those products, eating into their profits. Rate cuts by the Fed often send bank stocks lower, and this appears to have been no exception.

It's possible that bank stocks could have bounced back from the rate cut, but throughout the month, there were troubling signs that the economy -- both in the U.S. and globally -- might be showing signs of weakness.

Fears of a recession began to emerge in August, and that also weighed on bank stocks. Recessions, bad for the stock market in general, are particularly tough on banks as consumers pull back on big purchases that require new loans and mortgages. And some borrowers may default on the debt they already have.

On Aug. 14, the yield spread between the two-year and 10-year U.S. Treasury notes flipped. That is, the yield on the shorter-term notes was higher than on the longer-term benchmark notes. The same thing occurred in the U.K. This so-called inverted yield curve is widely considered to be a recession indicator, and in fact has preceded the last seven U.S. recessions, although the time between the inversion and the onset of a recession has varied.

And on Aug. 23, the U.S. and China escalated their ongoing trade war, announcing tit-for-tat tariff increases. China said it would put 5% to 10% tariffs on another set of U.S. goods, and reinstate a 25% duty on American-made automobiles. The Trump administration responded by raising an existing 10% duty on Chinese goods to 15% in September and hiking a 25% tariff on other goods to 30% in October.

Added to this were concerns about the U.S. deficit, the potential of the U.K. to "crash out" of the European Union under Prime Minister Boris Johnson, and declines in German manufacturing output and record negative bond yields. With all that going on, the likelihood of further -- and possibly steeper -- rate cuts from the Fed increased. All in all, it's a wonder that bank stocks didn't fall further than they did.

The silver lining for investors is that these declines have pushed these bank stocks into bargain territory. All are trading at or near five-year-low earnings multiples. For example, M&T is currently at a price-to-earnings ratio of 11.1, after having been above 15 since 2014. Fifth Third and Discover are both trading below 10 times earnings. Despite a stellar second quarter, SVB is trading at 9.8 times earnings, its lowest level since the Great Recession. Meanwhile, European banks ING and Barclays have P/E ratios below 8.

But these low prices may be justified, at least in the short term. If a U.S. or global recession hits, bank stocks are likely to sink further. Even if a recession doesn't officially hit, but market uncertainty continues, they could still see their shares suffer. Still, for long-term investors, this may be a golden opportunity to pick up some shares of financial companies on the cheap. Just be prepared to hold them for a while.