Please ensure Javascript is enabled for purposes of website accessibility
Free Article Join Over 1 Million Premium Members And Get More In-Depth Stock Guidance and Research
By Beth McKenna - Nov 26, 2019 at 10:04AM

The stock of the leading U.S. water utility has been a real gusher when it comes to returns.

American Water Works ( AWK -0.46% ) stock has been a fantastic investment for those who bought it at its initial public offering in April 2008 and held on.

So, just how great an investment has the country's largest publicly traded water and wastewater utility been? Let's dive in. 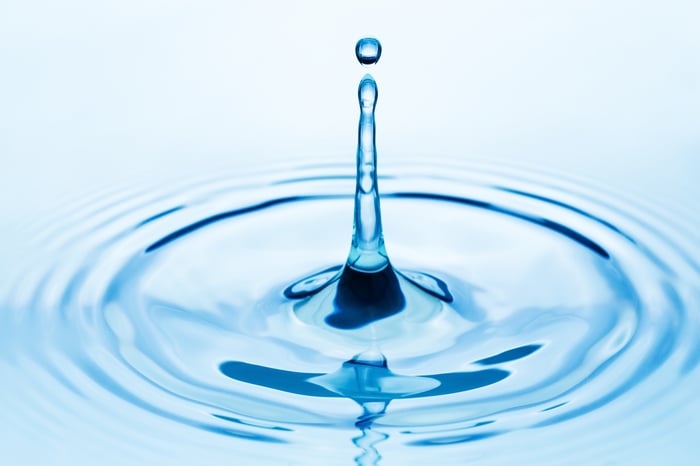 IPO makes a less-than-strong splash on the NYSE

On April 23, 2008, while George W. Bush was nearing the end of his second term, the U.S. was in the midst of the Great Recession, and Leona Lewis' Bleeding Love was topping the U.S. music charts, American Water Works made its debut on the NYSE.

Given the economic climate and the fact that it was a utility rather than a shiny tech player, it wasn't too surprising that things didn't go quite a as the company's owner, German utility RWE, had planned. The IPO price was $21.50 per share, below both the original target range of $24 to $26 and a revised range of $22 to $23. RWE offered 58 million shares, rather than the 64 million it had intended to sell.

Moreover, first-day trading action was as lukewarm as tap water. The stock opened a little lower than the IPO price, at $20.60, and basically treaded water in a narrow range of $20.22 to $21.45, before closing out the day where it started, at $20.60. (Thus, my numbers below assume that an investor bought shares at $20.60, as this is the most realistic assumption for most investors. Those investors "in" on the IPO -- typically well-connected folks and those with huge brokerage balances -- paid $21.50 per share. And, yes, there was a bit of poetic justice here.)

11 and a half years later, investors are swimming in strong returns

Every dollar invested in American Water Works stock on its first day of trading has turned into nearly $8 today. For comparison, a dollar plunked down that day into an index fund that tracks the S&P 500 would have turned into almost $3. Both figures assume dividends were reinvested.

Here's how much various dollar amounts invested in American Water Works' IPO would now be worth as of the market close on Nov. 25.

So, the answer to the headline question of how much money you'd have now if you invested $5,000 in American Water Works' IPO is nearly $40,000. That's a fantastic haul considering you'd have less than $9,000 if you followed the advice of those who say that it's best to put all your money earmarked for stocks into low-cost index funds that track the broader market. And those who invested just over $125,000 less than 12 years ago would now be sitting on $1 million -- a good illustration of how the rich get richer.

Moreover, American Water Works' shares have been considerably less volatile than the market. It declined far less than the overall market did during the portion of the Great Recession when it was publicly traded.

We can probably boil (pardon the pun) most of American Water Works' stock outperformance down to three interrelated factors:

As for the second item, there are two primary reasons why utility stocks tend to rise when interest rates are falling or are relatively low. First, their appeal to income-focused investors increases relative to bonds. Second, the cost of servicing the company's debt declines.

There are good reasons to believe that American Water Works stock will continue to perform better than the overall market over the long term. The company has three major catalysts for growth: industry consolidation, the need for major upgrades to the U.S. water system's infrastructure, and climate change. The warming of the globe should increase demand for fresh water.

Is It Too Late to Buy American Water Works?

Why American Water Works Is a Retiree's Dream Stock