The Internet of Things is going to become harder to ignore, as it will continue to fundamentally change not only the tech sector but also the global economy in the decades to come. As we head into the end of the year, here's how three of the best Internet-of-Things stocks have performed in 2016: 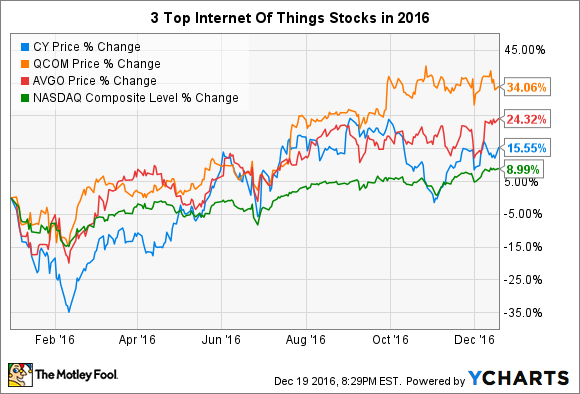 Of course, a company's stock price performance tells only a fraction of its story, especially regarding whether the company is a buy heading into next year. With that in mind, let's review what lead to the resounding successes at Cypress Semiconductor (NASDAQ:CY), Broadcom (NASDAQ:AVGO), and Qualcomm (NASDAQ:QCOM) this year, and how investors should view each tech stock heading into the year ahead.

Despite solidly outperforming the Nasdaq Composite this year, Cypress Semiconductor is still trying to find its footing in the wake of a few operational and merger-integration snafus. The good news? Its recent quarterly report showed solid, though unspectacular, progress. Cypress' adjusted revenue increased 13%, gross margin improved, and factory utilization increased. The company has also whittled away at the inventory issues that resulted from its Spansion acquisition last year. All things considered, Cypress appears to be headed in the right direction.

Cypress produces memory, programmable, and other semiconductors for applications in the automotive, industrial, and connected ecosystem markets. Together, these constitute some of the largest sectors being upended by the Internet of Things, and Cypress, like many of its other semiconductor peers, has aggressively engaged in M&A activity to position itself to ride the coming IoT wave to great success. Indeed, Wall Street currently sees plenty of room for future growth at Cypress. For 2017, the average analyst expects Cypress' revenue to increase 10%. Looking into the medium term, the analyst community estimates that Cypress will compound its earnings per share at a far more impressive 22% annual clip for the next five years. The company currently trades at just 16 times its 2017 estimated earnings, making Cypress an attractive way to buy into the IoT market today.

Though Broadcom sold its IoT chip business to Cypress last year -- one of Cypress' two major IoT acquisitions in the past 18 months -- Broadcom remains a great IoT stock in its own right. Unlike Cypress, though, Broadcom's four core target markets -- wireless communications, enterprise storage, wired infrastructure, and industrial -- mainly deal with supporting the back end of the Internet of Things.

Connecting the world's devices to one another will, of course, lead to an explosion in the volume of digital data produced, and the companies that produce solutions for this need stand to profit handsomely. For example, research firm IDC estimates that the number of data files, dubbed "information containers," will grow from 28 quadrillion in 2014 to 4,200 quadrillion by 2020. The need to sift, process, and analyze this data should generate demand for Broadcom's chips, fueling the company's prodigious growth for years to come.

The best performer among the IoT stocks discussed here, Qualcomm rallied in 2016 thanks to two main catalysts. The first is a general return to normality for Qualcomm's core mobile chip and patent licensing businesses, which had come under pressure in recent years. Specifically, Qualcomm encountered antitrust probes in China, and issues with royalty payment enforcement placed the outlook for its cash-cow IP licensing division in question. As it resolved these issues over the past two years, the removal of this risk overhang has helped restore investor confidence in Qualcomm.

Beyond this return to normality in its core reporting segments, Qualcomm has also done a fantastic job to position itself to profit from the rise of the IoT. Here, Qualcomm's blockbuster $39 billion acquisition agreement with Dutch IoT chip leader NXP Semiconductor (NASDAQ:NXPI) is the definition of skating where the puck is going.

NXP Semiconductor specializes in secure connections in chips. Current applications include in-car infotainment systems, smart homes, mobile payments, and more, all areas that should increase as the IoT market blossoms. Qualcomm's buyout offer for NXP Semiconductor is "all cash," meaning anyone interested in tapping into NXP's future growth will need to do so by owning Qualcomm stock.

Either way, investors should consider doing so, since the combination of Qualcomm and NXP Semiconductor seems poised to increase Qualcomm's already-dominant position in the global semiconductor market in the years to come.