3D Systems' (NYSE:DDD) investors can probably relate to Bill Murray's character in the movie Groundhog Day. Rather than reliving the same day over and over, they've been reliving changes in the 3D printing company's C-suite over and over again.

On Tuesday, 3D Systems' new CEO, Jeffrey Graves, took the reins from Vyomesh Joshi, who reportedly notified the board in February that he planned to retire as soon as a successor was hired, or by year's end at the latest.

Joshi held the top spot for four years. That's not such a bad tenure for a CEO of a company in turnaround mode. However, now the company is again searching for a permanent CFO, less than nine months after its last financial leader came on board. Frequent turnover at high levels is costly for companies, so should be viewed by investors with a critical eye.

Graves has a huge challenge on his hands. Investors, of course, want to get some feel for whether he seems he's up to the task. 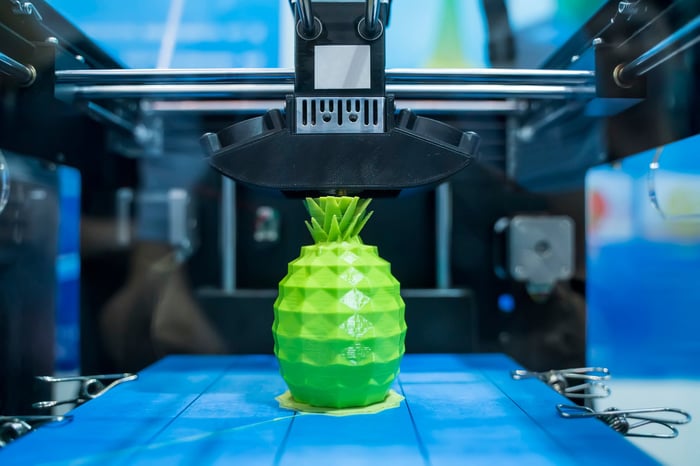 What is Jeffrey Graves' background?

Graves has 17 years of CEO experience, all at manufacturing companies. He holds a B.S., M.S., and PhD in metallurgical engineering and materials science, according to 3D Systems' press release.

Graves came to 3D Systems from MTS Systems (NASDAQ:MTSC), where he held the top spot for eight years. That company is a leading global supplier of high-performance test, simulation, and measurement systems. Coincidentally, it's headquartered in the same Minnesota city, Eden Prairie, as 3D Systems' arch-rival, Stratasys (NASDAQ:SSYS), which is based in both that Minneapolis suburb and an Israeli city. (Stratasys' dual headquarters stems from a 2012 merger.)

Many investors are probably curious as to how MTS Systems stock performed under Graves' tenure as CEO. So, here you go: 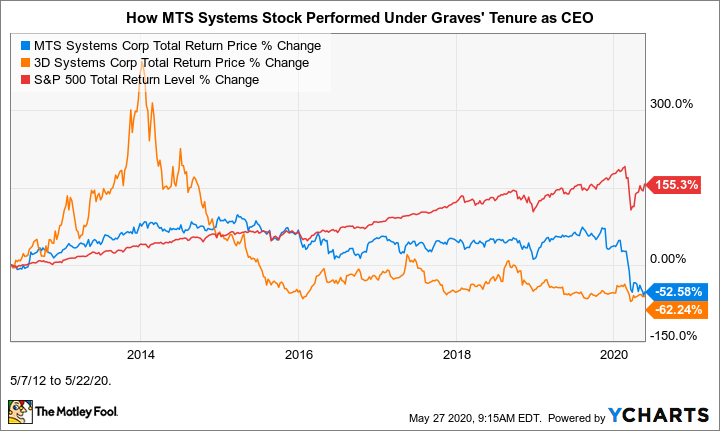 In 2020, MTS stock has fallen off a cliff due to the COVID-19 pandemic, which has disproportionately hurt companies in the industrial sector, particularly those with a high concentration of customers in the auto and aerospace industries.

This pandemic hit, of course, shouldn't be counted against Graves. But since he was CEO for a long time before this global crisis occurred -- nearly eight years -- it seems fair to consider MTS stock's performance during his tenure up through the time the pandemic sank the market.

The chart shows that MTS stock had a positive return over this period. (The same is not true of 3D Systems stock, which was underwater over this period.)  However, it significantly underperformed the broader market.

Of course, it's not possible to conclude that MTS stock's underperformance was in any way Graves' fault. For instance, it's possible the stock would have performed more poorly had someone else been CEO. So, just take this information as a data point, not a judgment.

Who's the interim CFO?

He replaces Todd Booth, whose tenure as the company's financial leader began last September. (Booth was 3D Systems' third CFO in less than four years. That makes Pensky its fourth CFO in less than five years.)

Pensky came out of retirement to take the interim job while the company looks for a permanent replacement for Booth. Prior to retiring in 2017, Pensky was CFO for 10 years of Hexcel Corp. (NYSE:HXL), a manufacturer of advanced composite materials used in aerospace and industrial applications.

Graves sits on Hexcel's board of directors, so it's easy to understand how Pensky ended up joining 3D Systems.

Like Stratasys, 3D Systems has been struggling to grow revenue and turn a profit in recent years. The overall 3D printing market has been growing. So, the issue is related to strategy or execution, or both.

Job No. 1 for Graves and Pensky, in my opinion, is to make darn sure that no new products are released prematurely. This issue plagued 3D Systems in the pre-Joshi era, and the company's biggest misstep under Joshi's watch, in my view, was the premature release of its factory metals solution. Customers ran into notable quality problems, so the company had to stop shipping the systems and diagnose and fix the bugs. During 3D Systems' recent conference call following the release of its first-quarter results, Joshi said the company began shipping the systems again in April.

There can be little doubt that some companies are hesitant to do business with 3D Systems because they're concerned that they'll end up with a pricey piece of equipment that doesn't function properly. This isn't just an inconvenience, but can also set back their own production timeline.

Stick with Proto Labs for now

For investors, cautious optimism is the name of the game with respect to 3D Systems' new top management. Graves and Pensky seem quite capable, but turning this company around is going to be tough.

For now, contract manufacturer Proto Labs (NYSE:PRLB) remains a better play on the growth of 3D printing than 3D Systems and Stratasys. Its top management is stable, and it has a reputation for quality and fast turnaround time. Moreover, Proto Labs stock has outperformed the market so far in 2020, as well as over the past three and five years.

3D Systems Just Got a New CEO; Is He Up to the Challenge? @themotleyfool #stocks $DDD $SSYS $PRLB $MTSC $HXL Next Article
Current