A recession refers to a period of declining GDP and is generally defined as a sustained decline for two or more consecutive quarters.

With all that in mind, you may wonder if investing is a good idea if we're in a recession or are headed in that direction. Is it wiser to take every dollar you make and keep it in cash? 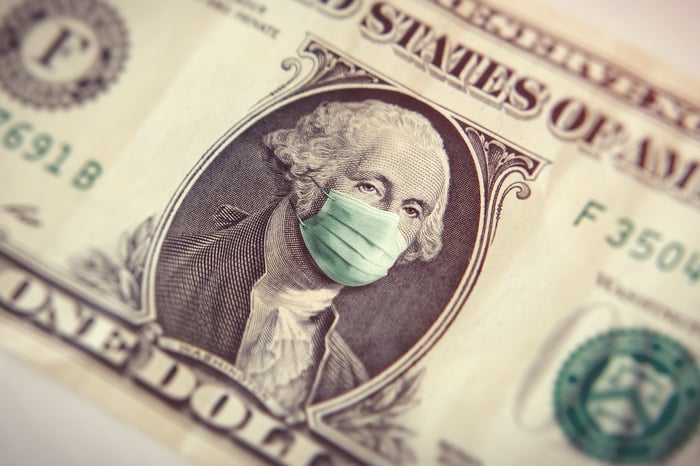 During a recession, stock values often decline. In theory, that's bad news for an existing portfolio. That said, leaving investments alone means not locking in recession-related losses by selling.

What's more, lower stock values offer a solid opportunity to invest on the cheap (relatively speaking). As such, investing during a recession can be a good idea but only under the following circumstances:

It can be a great idea to invest during a recession -- but only if you're in a strong enough financial position to do so and only if you have the right attitude and approach. You should never compromise your near-term financial security for long-term gain. So remember that if you're hurting financially, there's no shame in missing out on opportunities. Instead, focus on paying your bills and staying physically and mentally healthy. You can always ramp up your investments at a later point in life -- once your job is more secure, your earnings are steady, and your mind is more at ease on the whole.

Long-term investors who put money to work during a recession have done pretty well over time. Looking at data from three recent recessions prior to the COVID-19 pandemic -- the Great Recession from 2007-2009, the recession in 2001 fueled by the dot-com crash and the 9/11 attacks, and the 1990-91 recession that followed a long economic expansion in the 1980s -- you might be surprised at the long-term results, even if investors' timing wasn't perfect.

If you invest at the market's lowest point during a recession, you're likely going to do quite well over time. But one thing investors should realize is that trying to time the market is almost always a losing battle. There's no crystal ball that can tell you when the market will bottom. In other words, you are not going to invest at the absolutely perfect time.

But you don't have to. Even if you had invested in an S&P 500 index fund at the worst possible moment in 2007 — the market's peak before the financial crisis began — you would have achieved an 8.4% annualized return in the 13 years since. If you had bought at the highs before the 1990-91 recession, you would have achieved a 9.8% annualized return in the nearly 30 years since.

Consider what this means. If you had invested $10,000 in a standard S&P 500 index fund at the worst possible time during the 1990-91 recession, your investment would have grown to more than $150,000 in value today, assuming dividends were reinvested along the way.

In the last section, we mentioned index funds, and those can be a great way to invest -- recession or not. By purchasing index funds -- especially S&P 500 index funds -- you're betting on the long-term success of U.S. business. Over long periods of time, that's been a pretty solid bet.

As an example, during the COVID-19 pandemic and subsequent recession, companies in affected industries that had stronger balance sheets going into the crisis had an advantage over those that didn't. Companies that had the financial flexibility to survive a long disruption started to look like excellent long-term investment opportunities, while companies with otherwise good businesses but low liquidity were among the hardest-hit stocks, and some didn't survive.

In a recession, how you invest can be just as important as what you invest in. In recessions, stocks tend to be rather volatile, as anyone who was involved in the market during the 2008-09 financial crisis can tell you.

Rather than trying to time the market, invest incrementally. Known as dollar-cost averaging, this strategy refers to investing equal dollar amounts at certain time intervals as opposed to buying all at once. This way, if prices continue to fall, you can take advantage and buy more. And, if prices start to rise, you'll end up buying more shares at the lower prices and fewer shares when your favorite stocks start to get more expensive.

That said, the most important thing isn't necessarily what not to invest in but what behaviors to avoid. Specifically:

The bottom line is that, during recessions, it's important to stay the course. It becomes a bit more important to focus on top-quality companies in turbulent times, but, for the most part, you should approach investing in a recession in the same manner you would approach investing any other time. Buy high-quality companies or funds and hold on to them for as long as they stay that way.