Rich Smith, Steve Heller, and Reuben Gregg Brewer
(TMFDitty)
Author Bio
I like things that go "boom." Sonic or otherwise, that means I tend to gravitate towards defense and aerospace stocks. But to tell the truth, over the course of a dozen years writing for The Motley Fool, I have covered -- and continue to cover -- everything from retailers to consumer goods stocks, and from tech to banks to insurers as well. Follow me on Twitter or Facebook for the most important developments in defense & aerospace news, and other great stories besides.
Follow @RichSmithFool

Once touted as the hottest ride in the industrials sector, the 3D printing industry has lately found investors holding a round-trip ticket. Over the past five years, shareholders of Stratasys (NASDAQ:SSYS) and 3D Systems (NYSE:DDD) -- the two biggest names in the 3D sector -- have seen their stocks first skyrocket, then crater. Today, shares of both stocks trade for about what they cost five years ago.

Indeed, Stratasys shares actually sell for less today than they were worth five years ago.

That's not entirely surprising. After all, while Stratasys and 3D Systems began this decade with positive profits, both stocks have seen their earnings plummet, and both are unprofitable today. But that doesn't mean the 3D printing sector is entirely without hope. As it matures, new players are entering the industry -- and some of them are even earning profits.

Today, we've invited three of our analysts to tell you about their favorite. Let's listen in. 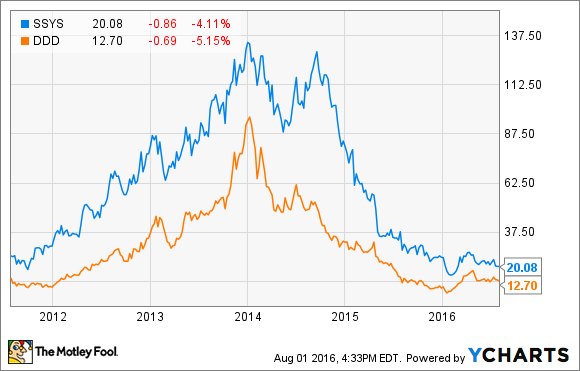 SSYS and 3D data by YCharts.

Rich Smith: Let's start off with the company that is itself partially to blame for the falloff in stock prices at Stratasys and 3D Systems: "2D printing" goliath HP Inc. (NYSE:HPQ).

Last month, research house Piper Jaffray blamed HP and its introduction of a Fusion Jet printer to compete with models sold by Stratasys and 3D Systems for scaring buyers away from buying what might soon become old technology. According to Piper, its survey of the 3D printing industry suggests that buyers have decided to "pause purchasing to assess" their options lately, with the result that sales across the industry have stalled. Additionally, "several existing DDD and SSYS resellers are likely to partner with HP," warns Piper, and this "will likely distract channels and stress relationships" among the former leading companies in this industry.

Now, 3D printing is not exactly HP's primary focus, and HP stock is far from a "pure play" on 3D printing. According to data from S&P Global Market Intelligence, HP still gets far more revenue from traditional 2D printing-on-paper, and even more revenue from the sale of PCs, than from its nascent 3D market. But that shouldn't disqualify the stock as a candidate for consideration by 3D printing investors. At last report, HP shares were selling for just 7.4 times earnings. With the stock paying a big 3.5% dividend yield, HP's dividend alone justifies about half the stock's P/E ratio, meaning HP doesn't need to grow much at all to justify its share price.

Could 3D printing be the catalyst that provides that little bit of needed growth? I think it could. But just in case you disagree, here are two more ideas for you.

That's not a tech company!

Reuben Gregg Brewer: My pick for a 3D printing company is a bit unconventional, given that Alcoa Inc. (NYSE:AA) is best known as an aluminum maker. But here's the thing: It also produces specialty parts for industries such as aerospace. And it's been using 3D printing, also dubbed "additive manufacturing," to make specialty parts for more than 20 years. In fact, the company inked a deal with Airbus in April to supply 3D-printed titanium fuselage and engine pylon parts to the plane maker, and it recently spent $60 million to speed up its broader 3D printing plans.

That said, Alcoa isn't the only aerospace company printing parts. But one of the key things it does is make the metal "inks" used in the 3D printing process, which keys off its experience and expertise in the metals space. So it could end up being a key supplier to other manufacturers using 3D printing. That's interesting, but the really exciting thing about Alcoa is its Ampliforge technology.

Ampliforge is a process that the company claims increases the strength of 3D-printed parts beyond what printing alone can achieve. If Ampliforge proves a sustainable competitive advantage, Alcoa could end up dominating the aerospace niche of the 3D printing market, where light weight and durability are both key issues. Now that really is something to get excited about. 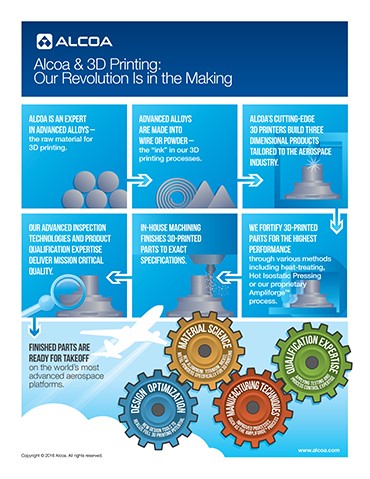 There are a lot of moving parts at Alcoa today, as it looks to break itself up into a metals business, which will retain the Alcoa name, and a specialty parts company, to be known as Arconic. But if you are interested in 3D printing, you may want to do the homework to understand what Alcoa is achieving in the space today -- it could set the company up to be a big player in a growing 3D printing niche. Note, however, that it's Arconic that will own the 3D printing business once the parts division is finally spun off.

Steve Heller: Although the 3D printing industry has experienced a notable slowdown in customer demand over the past 18 months, which has put downward pressure on 3D printer hardware sales at 3D Systems and Stratasys, the growth of 3D printing services has been on the rise. Service bureaus are essentially a "Kinko's" for 3D printing, allowing customers to take advantage of 3D printing without requiring the expertise or capital to invest in professional-grade 3D printing technology.

To put Proto Labs' overall revenue growth in perspective, here's how it compares with 3D Systems and Stratasys since the start of 2015 -- when industry demand started slowing: 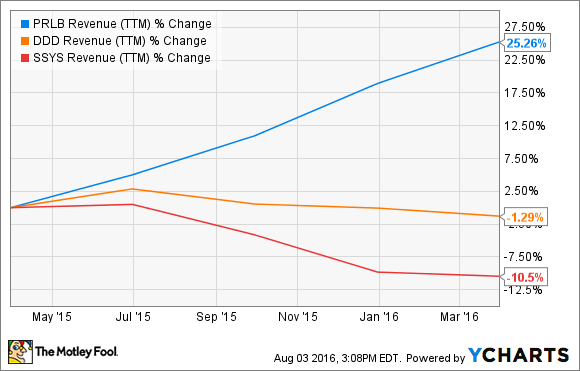 In other words, Proto Labs is a technology-agnostic company that is free to adopt the best 3D printing technology on the market for its customers. This is a favorable position compared to 3D Systems and Stratasys, which have to defend themselves from the upcoming entrance of HP's Multi Jet Fusion and the recently introduced Carbon M1. As these new entrants jockey for position against 3D Systems and Stratasys, Proto Labs can merely sit back and choose whatever technology it pleases.

Before jumping in, it's worth noting that Proto Labs' expenses have started to outpace its revenue growth, which has caused its profits to stagnate. Most recently, Proto Labs' second-quarter operating margin fell from 27.1% last year to 19.8% this year, as total operating expenses grew by a blistering 35.6% year over year -- more than twice as fast as its revenue growth rate. However, if Proto Labs can stabilize its expenses while it continues to grow its revenue, this situation may only be temporary.

And there you have it, folks. We promised you one 3D printing idea to invest in -- and here we've gone and given you three.

Which of them appeals to you most? Tell us in the comments section below. Or even better, stack your reputation up against The Motley Fool's best and brightest, and pick one of them (or more) to outperform on our free stock-picking service, Motley Fool CAPS.