Machine learning is a subset of the broader artificial intelligence (AI) market. Chipmaker NVIDIA Corporation (NASDAQ:NVDA) defines the technology as "... the practice of using algorithms to parse data, learn from it, and then make a determination or prediction about something in the world." In short, it's the tech that allows computers to learn from the data that they've been given in order to draw a conclusion, without having to be pre-programmed to do so.

Alphabet (NASDAQ:GOOG) (NASDAQ:GOOGL), Amazon (NASDAQ:AMZN), and NVIDIA have already integrated machine learning into parts of their businesses, with great results. With these tech giants already making big moves in this space, 2019 may be a good time for investors to start betting on these machine learning leaders. 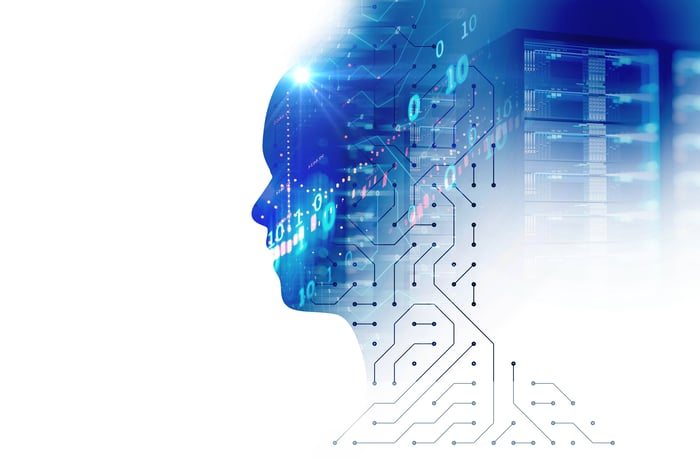 Alphabet's being driven by machine learning

One of the most direct ways Alphabet uses machine learning right now is through the company's self-driving vehicle company Waymo. Waymo just launched its commercial autonomous ride-hailing service a few weeks ago, making it a leader in this nascent market, and the machine learning software that's driving the vehicles is second to none.

Waymo's tech allows its fleet of vehicles to not just process the visual information around them (like where other cars are, where pedestrians are walking, etc.), but to also learn from all of the interactions it has while driving and apply what it learns to future trips.

The benefit for Alphabet will come from Waymo selling rides to the public (which will expand more next year) and licensing its technology to automakers, and potentially from automated package delivery services. When combined, those businesses will give Waymo an estimated value of about $175 billion according to Morgan Stanley.

Amazon CEO Jeff Bezos has been relatively outspoken about his company's use of machine learning, and has even gone so far as to say that it's used in every part of the company's business. The most apparent machine learning use comes in the form of figuring out where and how items will be on the Amazon website for users to see, and which products Amazon recommends to its users. Bezos said last year that:

"Machine learning drives our algorithms for demand forecasting, product search ranking, product and deals recommendations, merchandising placements, fraud detection, translations, and much more. Though less visible, much of the impact of machine learning will be of this type -- quietly but meaningfully improving core operations."

But more recently, Amazon has apparently also been looking to machine learning to help drive its fast-growing advertising business. The company recently posted a job online for a machine learning and data scientist to help the company with video ads on its site. Amazon mentioned that the new hire would need to "Utilize machine learning and analytical techniques" to create solutions across the company's business, including its ad-serving pipeline.

Additionally, a recent AdAge article noted that Amazon is "developing data and analytics tools for brands, backed by machine learning and its ubiquitous web services" so that it can use the tech to find relevant data for ad targeting and measure ad success.

NVIDIA's Drive PX Pegasus system allows vehicles to see and process the images captured by onboard cameras so that the vehicles can correctly navigate their surroundings. NVIDIA says its GPUs are used in Pegasus' deep learning, a type of machine learning, to give vehicles computer vision to understand their surroundings. NVIDIA's Pegasus is already being used by more than 25 companies to develop fully autonomous robotaxis that can drive themselves.

NVIDIA believes that autonomous vehicles represent a $60 billion total addressable market for the company by 2035. That may be a long way off, but 2019 is already shaping up to be a pivotal year for autonomous driving services, and the market will likely ramp up over the new few years.

Of course, there's no guarantee that these companies will see their share prices skyrocket in 2019. But these companies are already heavily invested in machine learning, and are keeping a long-term perspective in mind for how they'll benefit from it.

Investors who take a similar approach to machine learning will likely be rewarded as they wait for the artificial intelligence market, including machine learning, to grow. But that means they'll probably have to wait beyond 2019 to see significant returns.