Growth stocks , after all, tend to be riskier on average, while recession-proof stocks are usually mature companies in stable industries that pay dividends. With those kinds of stocks, investors generally have to sacrifice growth for income and security.

However, one stock in the pet-food industry seems to defy this investing rule. If you're looking for both growth and protection from a downturn, consider Freshpet (NASDAQ:FRPT), a maker of natural, often refrigerated pet foods and an under-the-radar stock that's put up monster returns in recent years. 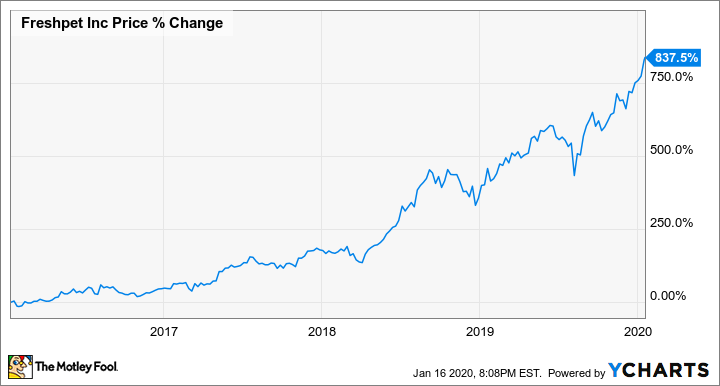 Why is it recession-proof?

The pet products industry is among the most resilient to recessions. Even in economic downturns, Americans are willing to spend on their pets. Though they may have to tighten their own purse strings during tough times, they don't want to deprive Fido of a good meal.

During the financial crisis while much of the economy was crashing, spending on pet products continued to grow unfazed, increasing 12% from 2008-2010, according to data from the American Pet Products Association (APPA), consistent with its growth rate over much of the past decade.

As most dog owners know, switching your pets to a new food isn't always easy. They get accustomed to a certain diet and may get sick if they try something different, at least without a gradual transition. That helps create switching costs even for a premium brand like Freshpet.

Why is it growing fast?

Freshpet has seen revenue growth of 20% for eight consecutive quarters, significantly better than the broader pet-food industry, which is growing by about 6%. The company is benefiting from two major secular tailwinds.

First is the humanization of pets. Pet-owners, especially millennials and other young adults, often view their pets as family members and want to treat them as such. According to the APPA, 25% of dog and cat owners would prioritize their pet over themselves when it comes to a large medical expense, and another 25% weren't sure who they'd prioritize.

Second is the desire to spend on natural foods, which are perceived as healthier for people and pets. That category continues to take share from overall food spending.

Those two trends have combined with a concerted marketing effort the company calls "Feed the growth" to expand the number of stores where Freshpet is available to 21,000 across the country. By boosting marketing spending, the company has driven more frequent sales at its retail partners, enticing them to grow the brand's availability.

Also driving that growth is Freshpet's high customer satisfaction and loyalty. Of Freshpet customers, 82% report a visible health improvement when their pets switch to Freshpet products, and 96% say they're extremely or very satisfied with the product. That shows the brand has high retention, and those loyal customers will also help drive growth through word of mouth.

Will it keep growing?

Freshpet is still a relatively small fish in the big pond of pet food. For 2019, it's on track to bring in $244 million in revenue, but it still has plenty of room to grow. Today, there are 63 million dog-owning households in the U.S., but only 3 million of them use Freshpet products. In other words, the company could double its U.S. penetration and still have less than 10% market share. Adding distribution points with Freshpet fridges is another way to increase sales, but the presence of those refrigerators also creates barriers to entry as that type of supply chain is more difficult to sustain than dry pet food.

The company is also expanding internationally, having begun selling its products in Canada and the U.K., and is introducing new products such as a line of small-piece bagged dog food next year. It's also expanding production capacity through a program it calls Kitchens 2.0, a more efficient and partly automated facility that will soon open in Pennsylvania.

Based on those future prospects, the company projects adjusted EBITDA growth of 25% or more over the long term, showing the company's potential on the bottom line.

Freshpet shares are pricey following the recent run-up, trading at a price-to-sales ratio around 10, and the company is only minimally profitable today. Investors expect the stock's recent growth rate to slow down, but considering its momentum, future opportunities, and secular tailwinds, the stock looks primed to continue outgrowing the market.

This Recession-Proof Stock Is Up 800% Over the Past 4 Years. Can It Keep Delivering Monster Gains? @themotleyfool #stocks $FRPT Next Article
Current