The recent stock market meltdown, driven by the coronavirus, has fueled fears of a recession. That's not surprising, given that we've had one full decade of an incredible bull run ever since the last U.S. recession. Yet there's no knowing what can drag the U.S. economy into a downturn and, most importantly, when.

The best you can do as an investor is prepare for a recession. One way is to invest in some stocks that are recession proof, or simply strong enough to hold their footing during tough times. Three such top recession-proof stocks to consider now are Waste Connections (NYSE:WCN), NextEra Energy (NYSE:NEE), and Johnson & Johnson (NYSE:JNJ). 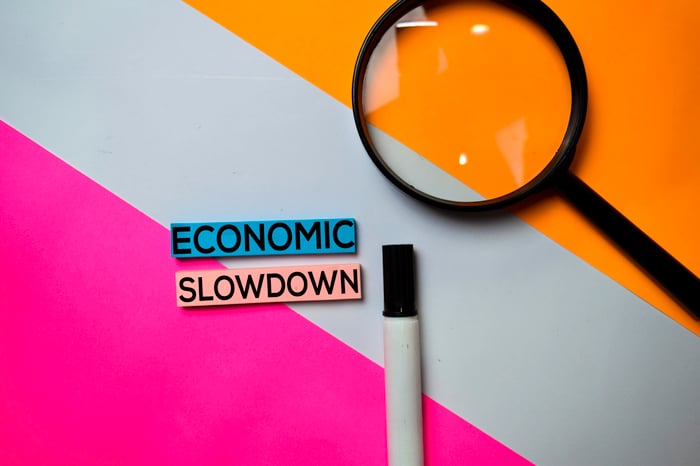 Waste Connections collects, disposes, and recycles non-hazardous waste in the U.S. and Canada, serving more than 7 million customers in 42 U.S. states and six Canadian provinces. It's also a key player in energy and production (E&P) or oilfield waste management through its R360 environmental subsidiary, with operations in major shale plays such as the Permian, Bakken, and Eagle Ford basins.

Waste Connections primarily uses a two-pronged approach to growth: exclusive service-provider agreements that ensure a steady stream of income, and acquisitions to tap new markets. In 2019, the company made 21 acquisitions for roughly $838 million, which helped drive revenue up by 9.5% to $5.4 billion and cash from operations by 9.2% to $1.5 billion. Net income rose a slower 4% because of higher taxes and impairments. 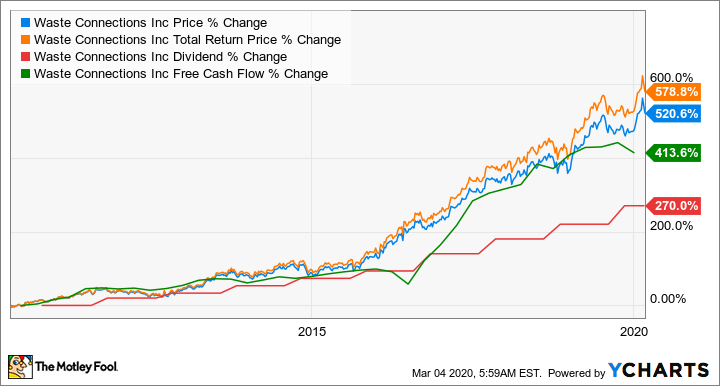 The estimated remaining life of Waste Connections' landfills is almost 26 years, which could go up to 29 if the company wins pending expansion approvals for nine landfills. The E&P space is hugely promising as well. With 12 dedicated E&P landfills, Waste Connections in fact has a stronger foothold in E&P than the largest waste management company in the U.S., Waste Management. Nine of Waste Connections' municipal solid waste landfills also received E&P waste in 2019, reflecting the growth potential in E&P.

It's well known how the defensive, regulated nature of a utility's business makes utility stocks a great option to bank on during a recession. What you need, though, is a stock that also has strong growth and dividend potential to ensure you have at least some flow of income even during a downturn. NextEra Energy is one such company.

While NextEra Energy delivers electricity the traditional way to more than 5 million customers through its two subsidiaries, Florida Power & Light and Gulf Power Company, it also constructs and operates power plants and pipelines and sells electricity through its subsidiary, NextEra Energy Resources (NEER). The difference is that NEER generates nearly all its electricity from renewable energy sources and is the world's largest producer of electricity from wind and solar today, having invested more than $20 billion into renewable infrastructure over the years.

Such large-scale utility and renewable-energy operations make NextEra Energy a top utility stock to own. The company has grown its adjusted earnings per share at a compound annual growth rate (CAGR) of 8.4% and its dividend at a CAGR of 9.4% since 2004. That explains the stock's stupendous performance through the period. 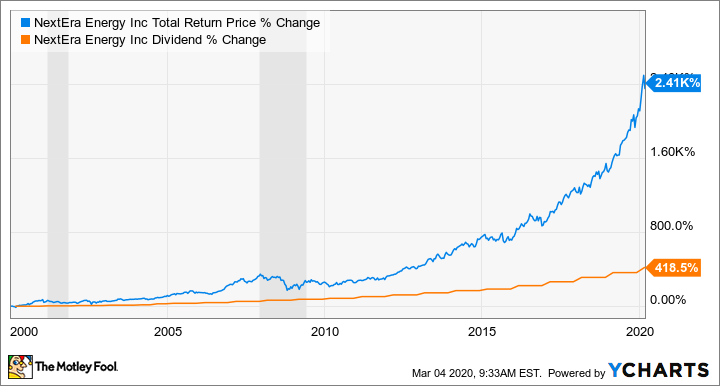 With NextEra planning to invest $12 billion to $14 billion each year through 2022 on various growth projects, including wind and solar technologies to lower costs, earnings could grow steadily. Add potential double-digit annual dividend increases and a decent yield of 2%, and NextEra makes a compelling low-risk stock to buy.

Johnson & Johnson's business mix is built to withstand storms. Pharmaceutical, medical devices, and consumer health are all products that will find demand no matter how sluggish the economy is, as healthcare expenses aren't really a choice. J&J is the world's largest healthcare company.

In 2019, J&J generated $82.1 billion in sales, half of which came from pharmaceuticals. Products in the segment cover infectious diseases, immunology, oncology, neuroscience, and cardiovascular, among others. Medical device was the second-largest segment, contributing roughly one-third to J&J's 2019 sales. Here's a fun fact: 26 of J&J's products generate $1 billion in sales each.

J&J has always prioritized organic growth over mergers and acquisitions, which is why it spent $11.4 billion on research and development last year. The company also believes in sharing its success with shareholders: J&J has increased dividends every year for 57 consecutive years, with the last bump being 5.6% in April 2019. That J&J stock raised dividends even during recessions and recovered swiftly are proof of its resilience. 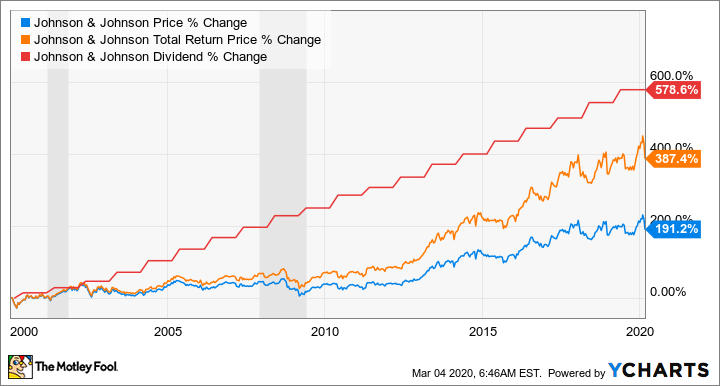 J&J has atleast 10 new molecular entity filings of launches lined up by 2023. J&J's latest COVID-19 program that includes expedited research to develop treatment solutions and a vaccine for coronaviruses is a great example of the company's innovative leadership in healthcare, a virtue that adds to its appeal as a recession-proof stock.