The virtual reality market has been hailed as the "next big thing" for decades, but VR has repeatedly disappointed consumers with mediocre hardware products and software experiences.

But in recent years, a wave of refined devices narrowed the gap between consumer expectations and reality. The VR market's future has yet to be written, but investors who believe in this budding market should consider buying these four tech stocks. 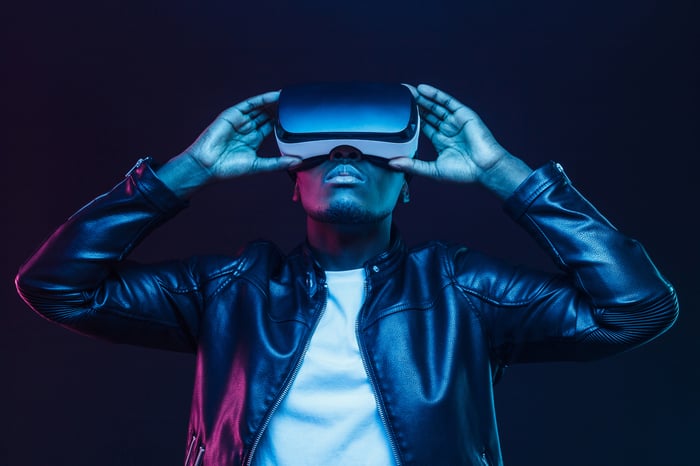 Sony's (NYSE:SONY) PlayStation VR is the best-selling VR headset in the world with over 5 million shipments since its launch in October 2016. That only represents a sliver of Sony's installed base of 110 million PS4s, but that foothold has encouraged developers to produce more stand-alone VR games and add-on experiences for PS4 games.

The PSVR will be fully compatible with the upcoming PS5, and could differentiate the next-gen console from Microsoft's (NASDAQ:MSFT) Xbox Series X. Microsoft has already said it won't prioritize VR experiences for its new console, so the PSVR could dazzle more gamers when paired with the PS5's more powerful hardware.

Sony's console gaming business generated 24% of its revenue and 28% of its operating profits last year, but its growth is slowing as gamers postpone their purchases ahead of the PS5's launch. Therefore, a strong VR-supported launch during the holidays could breathe fresh life into this core business.

Facebook's (NASDAQ:FB) Oculus Quest, its second stand-alone VR headset after the Oculus Go, was the second-best-selling VR device of 2019 with 705,000 shipments worldwide, according to SuperData.

That's still a niche market compared to PCs and phones, but the Quest's ecosystem is steadily growing. In May, Facebook announced it sold over $100 million in virtual reality content for the Quest over the past year.

Last quarter, Facebook mainly attributed its 80% year-over-year jump in "other" revenue to robust demand for the Oculus Quest. That business, which also produces its Portal devices, generated less than 2% of Facebook's revenue -- which mostly comes from ads -- but it could grow significantly over the next few years as Facebook launches additional VR devices.

Over the long term, Facebook could tightly integrate its main social network, Instagram, WhatsApp, and other services into its Oculus platform. If that happens, people could start socializing in VR spaces instead of traditional apps and pave the way for truly next-gen social media experiences. 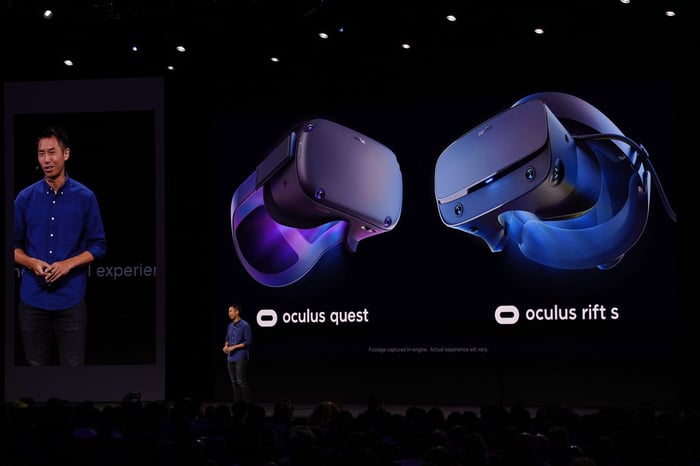 Qualcomm (NASDAQ:QCOM), the largest mobile chipmaker in the world, generates most of its revenue from the smartphone market. But in recent years it's struggled with slowing demand for smartphones, competition from lower-end and first-party chipmakers, and probes and fines challenging the market dominance of its chipmaking and wireless patents.

To reduce its dependence on the smartphone market, Qualcomm expanded into other markets -- including Internet of Things (IoT) chips, driverless cars, drones, and AR/VR headsets.

Taiwanese chipmaker Himax Technologies (NASDAQ:HIMX) generates most of its revenue from display driver integrated circuits (ICs) for smartphones, tablets, monitors, and TVs. Demand for these chips has been sluggish, especially in the saturated LCD panel market.

Himax previously supplied components for the developer versions of Facebook's Oculus Rift and Microsoft's HoloLens. It's unclear if these tech giants will continue using Himax's chips in their new consumer-facing devices, but the chipmaker should remain a major supply chain player in the growing VR market.

Investors shouldn't buy shares of Sony, Facebook, Qualcomm, and/or Himax for their VR ambitions alone since all four companies generate most of their revenue from other core businesses. But over the long term, these four companies could all benefit from the gradual growth of this nascent market.