In business, the next big thing isn't always so big.

Four years ago, 3D-printing was being called "Industrial Revolution 2.0", and stocks like 3D Systems and Stratasys soared on hopes that the burgeoning technology would make the transition to everyday usage in manufacturing, or even in the home. While 3-D technology continues to develop, that revolution never materialized. As the chart below shows, the stocks have wilted since the boom. 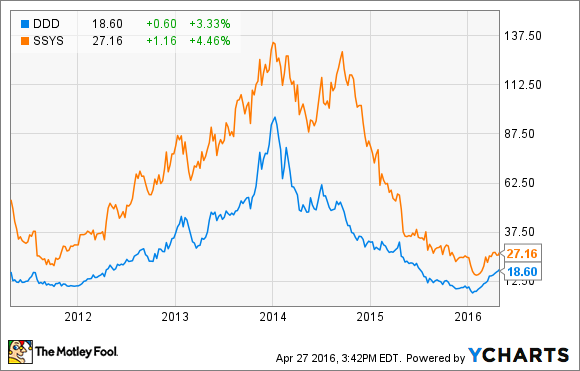 A similar conclusion can be drawn about 3D entertainment. 3D TV and movies were once expected to take over the way we watch videos, but that never happened. There are several theories as to why, including that movies didn't make 3D an integral part of the story-telling process, but the fundamental reason seems to be that audiences just didn't like it or need it. The added expense wasn't worth it, and some reports found that users simply didn't want to wear 3D glasses. Famed movie critic Roger Ebert and film editor Walter Murch insisted that the technology just didn't work with human eyes.

The short life of Alphabet's (NASDAQ:GOOG) (NASDAQ:GOOGL) Google Glass offers a similar example. When it was unveiled in 2012, the wearable tech device was hailed as one of the best inventions of the year by Time, and it was paraded through media outlets, big and small, with celebrities testing it out. Instead of sweeping the nation, however, the product was panned by critics, and found to be invasive. Businesses like bars and movie theaters banned the device, wary of being filmed. Ultimately, Google pulled the plug.

The next frontier
More than any technology today, virtual reality is being billed as the next big thing. Facebook (NASDAQ:FB) plunked down $2 billion to acquire Oculus VR in 2014, and CEO Mark Zuckerberg believes the technology will be groundbreaking as a social platform in the future. Facebook isn't the only one betting on VR either -- Google sent its Google Cardboard devices to New York Times subscribers, and companies including Sony and Samsung are working on the new technology as well.

After decades of talk about virtual reality, the technology finally seems to be at a tipping point, and enthusiasm for it abounds. Still, there are several reasons that these new devices may not take over the way some expect.

1. No identifiable need for them
Most successful technologies solve a problem, or make something easier. The smartphone has been so successful because it gives users access to communication tools like email, text, phone, social media, and apps like interactive maps, in a wallet-sized gadget that fits in your pocket. The smartphone did not do anything new, in the traditional sense -- it just made doing the everyday things we already do easier.

Most other revolutionary devices have followed this pattern. The smartphone evolved from the cell phone and the computer. The computer came out of the TV, which added a video component to radio. Entertainment is arguably a need, but entertainment alone may make a VR device a tough sell, especially for a few hundred dollars or more.

2. Wearing the headsets just looks goofy
There's no elegant way to put this: the headsets just do not look good. And people just aren't used to wearing these kinds of things -- for entertainment, or really any reason. Part of the reason Google Glass failed is because wearers of the device just looked goofy. It wasn't socially acceptable, and people don't want to interact with someone wearing a camera or some sort of augmented/virtual reality tool.

Mark Zuckerberg insists that VR can be a social platform, and that could be true in some sense. But putting on a headset to watch TV, for example, ultimately separates you from the other people in the room. The Segway was supposed to be another transformative technology, but the way someone looked riding it and the stigma around it doomed it. VR could face the same challenges.

3. Breakthrough devices are rare
For every generation, it seems, a new tech device becomes ubiquitous. Since the 50s, we've seen the advent of first the TV, then the computer, and today the smartphone. VR devices could be the next step in this evolution, but plenty of devices have come and gone despite similar ambitions. Most recently, GoPro cameras seemed poised to sweep the nation, but now that company is seeing declining sales.

Notably, most of the major tech giants have built their empires on services, not products. Alphabet and Facebook connect people to information, and use those eyeballs to sell ads.  Amazon.com connects people to the stuff they want to buy. Microsoft and IBM sell software and cloud services. Of the American tech giants, only Apple has risen to dominance through device sales, and the iPhone-maker has been slow to dive into virtual reality, focusing instead on television and the automobile as its next big tech platform.

Instead of virtual reality, the emerging technology that could be truly revolutionary -- if it works -- is the self-driving car. That invention clearly solves a problem, and evolves from a predecessor in a way that virtual reality does not.

Even Mark Zuckerberg has said that he thinks it will take a decade for virtual reality to go mainstream. A lot can happen between now and then, but plenty of challenges stand in the way of VR becoming the next smartphone. As an Oculus executive told the Atlantic, "It's really hard to get headsets on the heads of hundreds of millions of people."