Picking home-run stocks -- or stocks capable of generating exponential returns on capital -- is no easy matter. That being said, there has arguably never been a more favorable environment for risk-tolerant investors on the hunt for unusual growth opportunities.

The fact of the matter is that the highly diverse healthcare sector has been churning out jaw-dropping returns on capital for the better part of the last decade. Companies like Axsome Therapeutics, for instance, have made a shocking amount of money for their early shareholders in an exceedingly short period of time. With this theme in mind, here is a look at six healthcare stocks that could make their early-bird investors filthy rich by the end of the current decade. 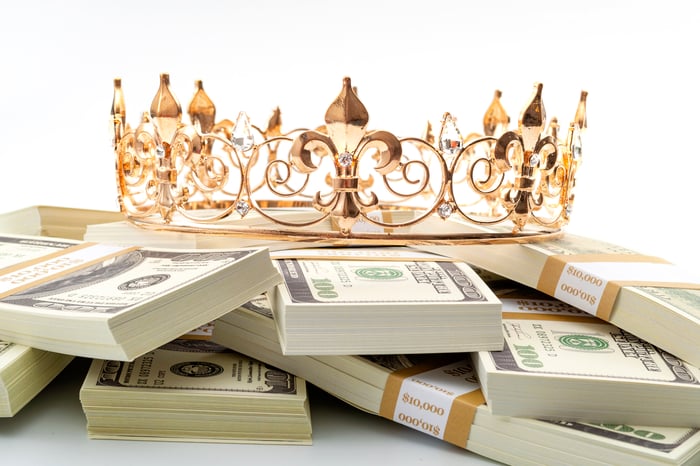 Adaptimmune Therapeutics (NASDAQ:ADAP), a clinical-stage cancer immunotherapy company, has already gapped up by a staggering 235% so far this year. Investors have been taking notice of this small-cap biotech stock for two reasons. First off, Adaptimmune recently shored up its long-term financial health through a much-needed capital raise. Secondly, the biotech inked a lucrative partnering deal with the Japanese pharmaceutical giant Astellas to co-develop new stem-cell derived allogeneic T-cell therapies for people with cancer.

The main attraction here is the growing potential for Adaptimmune's affinity-enhanced T-cell therapies to become a huge leap forward in the relatively new field of anti-cancer cell therapy. So, if that line holds, this small-cap biotech could rocket to large-cap status within just a matter of months. Adaptimmune's first major test will come with the next clinical update for its synovial sarcoma treatment ADP-A2M4. A positive readout should trigger more high-dollar licensing deals or perhaps even a buyout at a sky-high premium.

After a blistering 2019, Amarin (NASDAQ:AMRN), a mid-cap cardiovascular care company, has been a huge let down for investors during the early innings of 2020. The big-ticket item is the company's omega-3 treatment Vascepa, which was recently awarded a broader label as an add-on to statin therapy in patients with stubbornly high triglyceride levels and who are at risk of a heart attack, stroke, and certain types of heart issues requiring hospitalization.

Long story short, some investors bought the stock on the hope and belief that a high-dollar buyout was imminent in the wake of Vascepa's successful label expansion. Vascepa, after all, has a shot at one day posting multi-billion-dollar-a-year sales. Unfortunately, a buyout has yet to materialize.

But that doesn't mean that investors should throw in the towel. In the not-so-distant future, most industry insiders do expect Vascepa to at least reach blockbuster status (greater than $1 billion in annual sales). So, whether or not a suitor ever emerges, Amarin's equity should turn out to be a big winner for patient shareholders.

Canadian pot titan Aphria (NYSE:APHA) has also been a big disappointment for investors in 2020. Through no fault of its own, Aphria's shares have shed more than 17.4% of their value during the first six weeks of the new year. The key issue weighing down the pot company's stock is the dismal near-term outlook for the legal cannabis space at large. Canada's legal pot market has suffered from structural and regulatory setbacks, as well as the slow pace of legalization in the international arena. Nonetheless, Aphria could turn out to be a hidden gem.

Unlike most of its cannabis peers, Aphria has been able to attract deep-pocketed investors this year, it has been turning a profit on a consistent basis, and it also has a fairly healthy cash runway. So, even though 2020 will probably be another tough year for pot stocks in general, Aphria's low-ball valuation and various competitive advantages over the broader field arguably make it one of the few compelling buys in this space right now. In fact, it wouldn't be surprising if Aphria morphed into a blue-chip company by the end of the decade.

The U.K. based drugmaker Bicycle Therapeutics plc (NASDAQ:BCYC) has all the hallmarks of a hidden gem. The company's proprietary bicyclic peptide technology, or Bicycle for short, has the potential to push the field of immuno-oncology to new heights within a few short years. That being said, Bicycle is a highly speculative bet at this early stage of the game.

Point blank, the company's novel anti-cancer platform has yet to be validated via a large dataset in human subjects. Bicycle's highly differentiated immuno-oncology pipeline, though, is just the type of drug development platform that tends to attract blue-chip partners. As a result, investors comfortable with heavy doses of risk may want to get in on the ground floor of this unique immunotherapy company. After all, Bicycle's stock will surely catch fire at some point if its bicyclic peptide technology continues to hit the mark in the clinic.

Novavax (NASDAQ:NVAX) is a late-stage vaccine developer. Although the biotech's shares have been getting a boost from the COVID-19 threat of late, the real reason to consider this small-cap stock is the company's experimental flu vaccine known as NanoFlu. NanoFlu has the potential to reach blockbuster status perhaps within its first full year on the market due to the dire need for more effective flu vaccines. The company is expected to release the vaccine's pivotal stage results by the end of the first quarter.

What's the risk? Novavax has repeatedly rolled out promising early-to-mid-stage results for its vaccine development platform. However, the company has a poor track record when it comes to late-stage trials, which is likely the underlying reason its current valuation stands at a tiny fraction of NanoFlu's commercial opportunity right now.

In effect, the market doesn't have much confidence that Novavax will hit pay dirt with NanoFlu. So, if the company does prove its critics wrong this time around, its shares could quite possibly quadruple in value in the blink of an eye. Again, though, the high degree of risk with this name shouldn't be ignored. This clinical-stage biotech stock is basically an all-or-nothing value proposition at this critical juncture in its lifecycle.

Puma Biotechnology (NASDAQ:PBYI), a small-cap cancer specialist, has been blazing the comeback trail in 2020. The drugmaker's shares have gained a healthy 40% so far this year due to the growing optimism surrounding the commercial prospects of its much-maligned breast cancer treatment Nerlynx. Nerlynx's real-world commercial opportunity has basically been shrouded in mystery since its launch. The core issue is that the drug tends to produce severe bouts of diarrhea, which has led to uncomfortably high discontinuation rates among patients. The drug's sales, in turn, have consistently missed Wall Street's consensus estimates by a country mile ever since its commercial debut.

The market's extremely pessimistic take on this biotech stock, though, appears to be overdone at this point. Puma's shares are now trading at a dirt cheap price-to-sales ratio of 1.71. Most cancer specialists are currently garnering premiums that are four to five times higher. Puma's stock may ultimately fail to launch due to Nerlynx's problematic side effect profile. But there's also a decent chance that the biotech's clearance-rack valuation might attract one or more suitors before year's end. This grossly undervalued biotech could thus turn out to be the comeback story of the year.