Artificial intelligence (AI) -- the capability of a machine to mimic intelligent human behavior -- is a huge growth trend. The tech is being used to smarten up countless things large and small -- from cities and homes to cars and computers to factory equipment and healthcare diagnostic tools.

One research firm, IDC, estimates that spending on AI systems will soar from $37.5 billion in 2019 to $97.9 billion in 2023, which is a more than 28% compound annual growth rate. Some sources predict even faster growth.

So it's wise for investors to want some exposure to this high-growth area. Below are two top AI-related stocks worth investing in. You can invest in these stocks with as little as $1,000 (or less) because some online brokerages allow you to buy fractional shares of stock. 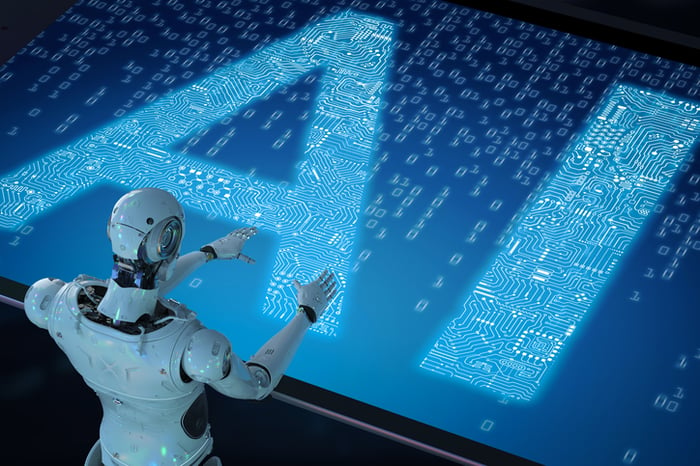 Amazon: AI plays a key role across its businesses

Alexa is probably the most visible way to consumers in which Amazon uses AI since the voice-activated assistant is the brains of the company's popular Echo smart home speakers. Amazon was the first mover in this space, beating fellow technology titans Alphabet and Apple to the punch.

Echo is still the market leader. This is important because smart speakers act as a hub of a smart home, so Amazon should be able to leverage its market leadership to sell consumers other smart home products and services.

From a current profit standpoint, however, Amazon's most important use of AI is making the tech available to its Amazon Web Services customers. AWS, the market leader in the public cloud space, accounted for just over 11% of Amazon's total revenue in its most recently reported quarter (the fourth quarter of 2019), yet an outsize 67% of its operating profits.

Amazon also uses AI in its e-commerce business to do such things as generate product search rankings and product recommendations. In fact, the company's early adoption of the tech is probably a key factor behind the phenomenal success of its online site.

While our focus is on AI, it would be remiss not to mention the timely topic of the coronavirus pandemic. Amazon's e-commerce revenue is poised to get a boost this year from the COVID-19 crisis because many more people worldwide are shopping online. More importantly, the company should get a long-term tailwind from the pandemic because it's likely gained many new Prime members during the crisis. Once many folks get a taste for the convenience of online shopping, there will probably be no going back to brick-and-mortar shopping.

Wall Street expects Amazon to grow earnings at a rapid average annual pace of 32.4% over the next five years. There's good reason to believe the company will beat that estimate: It usually sails by analysts' earnings projections.

Artificial intelligence plays a key role across NVIDIA's four platforms, though it's most critical within the company's data center and auto businesses. Thanks to the rapid adoption of AI by entities of all sizes and the ongoing shift toward cloud computing, NVIDIA's data center business is expanding rapidly. It seems poised to overtake computer gaming as the company's largest platform in the not-too-distant future.

NVIDIA's graphics processing units (GPUs) are considered the gold standard for accelerating the computing involved in deep-learning AI training in cloud data centers. In addition, its GPUs are quickly displacing CPUs as the favored chip for inferencing, the second step in the deep-learning process. It involves a machine applying what it's learned in its training to new data.

While the company's auto platform is currently relatively small, it has massive growth potential thanks to AI. Hundreds of automakers and others are developing driverless vehicle tech using NVIDIA's autonomous vehicle AI computing platform.

Moreover, the company has partnered with such big names as Toyota, Mercedes-Benz, and Volkswagen, meaning these companies will use NVIDIA's tech in at least some of their driverless vehicle production vehicles. Once fully autonomous vehicles are legal across the United States, NVIDIA's auto business should boom.

Wall Street expects NVIDIA will grow earnings by an average of 13.7% annually over the next five years. (This projection doesn't include the effects of the $6.9 billion Mellanox acquisition, which just jumped its final regulatory hurdle. NVIDIA announced on Thursday that it received approval for the acquisition from China's antitrust authority.)

It seems very likely that NVIDIA will leave this earnings growth expectation in the dust, as it has a long record of doing so.