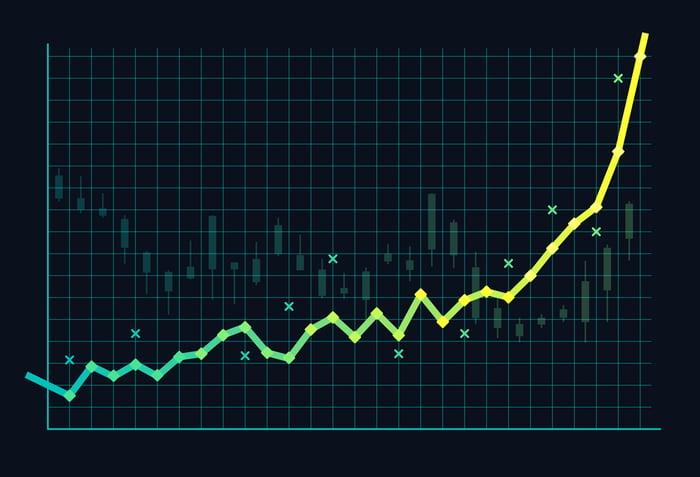 There are many growth tech stocks to consider, but the best of the bunch have long track records of robust growth, impressive profitability, and major competitive advantages. The top growth tech stocks include Amazon (NASDAQ:AMZN), Microsoft (NASDAQ:MSFT), NVIDIA (NASDAQ:NVDA), and Adobe (NASDAQ:ADBE).

E-commerce and cloud computing giant Amazon is the premier growth tech stock. The company is dominant in online retail, with more than 200 million paying Amazon Prime members and an unrivaled selection of products and shipping speeds. More than half of items sold are from third-party sellers who pay Amazon lucrative fees for access to its massive customer base.

The cloud computing business is even more impressive. Amazon Web Services (AWS) is wildly profitable, and it's the leading provider of public cloud infrastructure. AWS has generated nearly $50 billion of revenue over the past year, and it's still growing at a strong double-digit pace.

The pandemic has only helped Amazon as shoppers shifted to spending more online and businesses scrambled to expand their online presence. Amazon's sales jumped 38% in 2020, and profits nearly doubled. The bonanza may cool off a bit as the pandemic passes, but Amazon is well-positioned for many more years of rapid growth.

Software and cloud giant Microsoft has also benefited from the pandemic, although the company really didn't need the help. Microsoft Windows is the dominant PC operating system, Microsoft Office is still the top productivity suite, and Microsoft Azure is the No. 2 cloud computing provider in the world.

On top of all that, Microsoft's gaming and devices businesses are experiencing solid growth. The company also has a presence in the online collaboration and video conferencing markets with Microsoft Teams, which rivals both Slack (NYSE:WORK) and Zoom (NASDAQ:ZM). Microsoft has a lot of irons in the fire, to say the least.

All of this translates into impressive growth. Revenue soared by 19% in Microsoft's latest quarter, and net income shot up by around 40%. Microsoft doesn't disclose sales for its Azure cloud business, but it's growing faster than market leader and rival AWS.

Like Amazon, the end of the pandemic may cause sales growth to slow for Microsoft. But the tech giant has a vast array of growth opportunities that should keep revenue moving higher for years to come.

A global chip shortage, combined with a surge in cryptocurrency prices, has created a state of severe undersupply in the graphics chip market, which has caused prices to rise and inventory to be increasingly scarce. NVIDIA is profiting accordingly. Revenue soared by 60% in the company's latest quarter, with both the gaming and data center segments producing significant growth.

The current shortage won't last forever, though, and NVIDIA does face an increasingly competitive AMD (NASDAQ:AMD) in the graphics chip market. Intel (NASDAQ:INTC) is also looking to break into the market, potentially adding a third major competitor. Despite the rising competition, demand growth from PC gamers and data center customers should continue to drive sales higher for NVIDIA.

Software giant Adobe is breaking records. Sales grew by 26% in its latest quarter to $3.91 billion, the highest quarterly sales result in the company's history. Adobe wrings an incredible amount of profit from those sales, with a net income of $1.26 billion for the quarter.

Adobe's core business is creative software. The company makes Photoshop, Illustrator, Premiere Pro, and a wide variety of other creative software products. Adobe's products are often viewed as the industry standard. While there is competition, none of it is particularly threatening, given Adobe's entrenched status.

Adobe sells its products through subscriptions to its Creative Cloud. This lowers the cost of entry into Adobe's ecosystem, removes the need to constantly sell customers on new versions of software, and generates reliable streams of recurring revenue.

With double-digit growth, extreme profitability, and an absolutely dominant set of products, Adobe is certainly a top growth tech stock.

How to find tech stocks poised for growth

The two most important factors to consider to help you to identify tech stocks poised for growth are the company's industry sector and rate of sales growth:

Profitability isn't all that important if you're looking for the next big tech stock. Many tech companies aggressively focus on growing as fast as possible, sacrificing profit for increasing scale. That's not a bad idea if the customer base is likely to stick around for the long haul. It makes sense for a subscription software company, for example, to spend heavily to win a customer who may generate revenue for many years to come.

So when it comes to profitability, it's important that the company's performance is at least improving. Gross margin should be rising, and the company's path to turning a profit should be clear and viable.

Some growth-focused companies never turn a profit and ultimately turn out to be poor investments. And, even if you do identify the next top tech stock, remember that pricey growth stocks often have much higher volatility than the S&P 500 (SNPINDEX:^GSPC). Massive, painful declines in stock price are common with fast-growing tech stocks, and it can take an iron constitution to endure those declines without panicking.