Shares of several department store operators, including Macy's (NYSE:M), rose last Friday, bouncing back from steep losses year to date. However, Dillard's (NYSE:DDS) shares took off over the course of the trading day, thanks to an apparent short squeeze.

Indeed, by the time the market closed on Friday afternoon, Dillard's stock had rocketed 24% higher, after rising as much as 26.5%. Shares of the regional department store chain retreated a bit on Monday but still sit closer to their 52-week high than to their 52-week low. However, investors shouldn't let themselves be sucked in by this sudden surge in Dillard's stock price. The company's fundamentals and long-term competitive positioning remain quite poor. 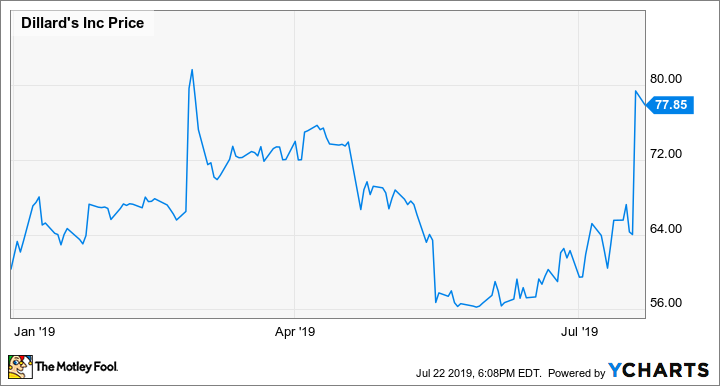 The Dillard family owns a substantial stake in their namesake company, limiting the "float" of shares available for everyday trading. Furthermore, lots of investors have bet against Dillard's in recent years, reflecting the struggles of the department store sector more broadly. As a result, a huge proportion of the float has been sold short by bearish investors.

This has made Dillard's stock vulnerable to short squeezes. Relatively modest levels of buying activity -- whether driven by positive news or something else -- can spark a chain reaction of sorts. A rising stock price can lead some of the "shorts" to buy the stock to cover their positions. That pushes the stock even higher, forcing even more shorts to buy the stock. This has happened periodically to Dillard's stock in recent years.

That said, even after the latest short squeeze, Dillard's shares have lost a third of their value over the past five years, compared to a gain of more than 50% for the broader market. Indeed, short squeezes can't make up for Dillard's poor long-term trajectory.

Dillard's doesn't have much of a strategy The real problem is that Dillard's isn't doing much to improve its position. The company has been closing a few underperforming locations, but that will have only a small impact on its profitability in the long run. And while Dillard's is known for having fairly attentive customer service and carries a better merchandise assortment than Macy's in many locations, management has been stingy about making investments that could boost growth.

Indeed, Dillard's has recently been spending about $140 million annually on capital expenditures, compared to Macy's nearly $1 billion. To be fair, Macy's is a larger company, but it is spending far more than Dillard's on a per-store basis, as well.

Macy's high capex budget is allowing it to pursue growth in multiple ways. It is remodeling its best stores, rolling out off-price sections in many locations, adding more technology to its stores to enhance the customer experience, and bolstering its e-commerce capabilities. Dillard's is practically standing still in comparison. For example, whereas Macy's has a highly rated mobile app that surpassed $1 billion in annual sales last year, Dillard's doesn't even have a mobile app.

In the short run, sales trends have been relatively comparable at Macy's and Dillard's. But in the long run, it seems quite likely that Dillard's reluctance to make bold investments in the business will catch up with the company.

Based on its Monday closing price of $77.93, Dillard's stock trades for 15 times the average analyst earnings estimate for fiscal 2019. That's a surprisingly high valuation for a company that has experienced steady earnings erosion in recent years. Analysts expect earnings per share to fall another 8% in fiscal 2020.

For comparison, Macy's stock trades for just seven times earnings. It, too, has experienced fairly steady margin erosion in recent years, but at least its aggressive growth investments offer some hope of a turnaround in the near future. Macy's also owns lots of valuable real estate that it is monetizing at a gradual pace, which provides some protection for investors.

There's no good reason for Dillard's stock to be trading at such a massive premium to Macy's stock. As a result, the stock's recent spike is likely to reverse before too long.