Cloud computing has been a promising investment theme in recent years. As NVIDIA (NASDAQ:NVDA) CEO Jensen Huang said on a recent conference call, "The basic computing elements are now storage servers, CPU servers, and GPU servers and are composed and orchestrated by hyperscale applications that are serving millions of users simultaneously."

Research firm Gartner previously forecast that the total cloud computing market will grow 17% this year to reach $266 billion, and that was before a global pandemic accelerated the trend. There are a number of different markets within the broader cloud market. Microsoft (NASDAQ:MSFT) is the leader in the enterprise software-as-a-service (SaaS) segment with commercial products like Microsoft 365.

Here's why NVIDIA, Microsoft, and Alibaba are great stock choices if you're looking to invest in cloud computing. 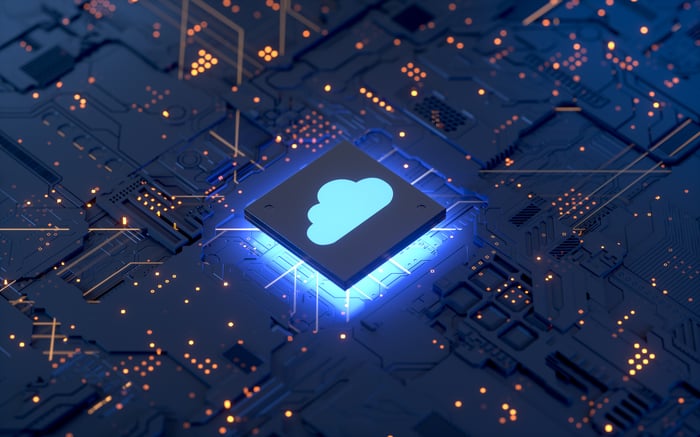 NVIDIA: The backbone of the cloud market

NVIDIA supplies graphics processing units (GPUs) to all the major cloud providers, and its sales growth in that market has been explosive. Its data center revenue soared from $339 million in fiscal 2016 to $2.99 billion in fiscal 2020. Sales in that segment totaled $1.14 billion in the first quarter of fiscal 2021, up 80% year over year.

NVIDIA just launched the A100 GPU, which will be deployed by Alibaba Cloud, AWS, Baidu Cloud, Dell Technologies, Alphabet's Google Cloud, and Microsoft Azure. Its DGX A100 can use up to 56 GPUs to handle the most demanding high-performance workloads, such as artificial intelligence applications.

Selling this high-powered hardware is great for margins. Non-GAAP gross margin increased to 65.8% last quarter, up 6.8 percentage points year over year. This was due to a favorable sales mix of GeForce GPUs for gaming and higher data center sales.

NVIDIA just completed its acquisition of Mellanox, a leading supplier of switches, cables, and other networking solutions for data centers. Mellanox will be included in NVIDIA's data center segment and gives the company a much wider catalog of offerings with which to compete for business as the big cloud providers expand their data center operations.

With the addition of Mellanox, NVIDIA expects fiscal second-quarter revenue to reach approximately $3.65 billion, up 41% year over year.

NVIDIA is in a great position to benefit from the growth of cloud computing. During its latest earnings call, Huang said, "I think that accelerated cloud computing is a movement that is going to be a multiyear, if not a decade-long, transition."

Given that lengthy transition cycle as organizations shift from on-premise servers to the cloud, I wouldn't be afraid to open a small position in NVIDIA stock. It currently trades at a forward price-to-earnings (P/E) ratio of 47 with a small dividend that yields 0.2%.

Microsoft: Gaining ground on the leader

"We have more data center regions than any other cloud provider, and this quarter we announced new regions in Mexico, as well as in Spain," CEO Satya Nadella said during a recent call. "We are the only cloud that extends to the edge with consistency across operating models, development environments, and infrastructure stack."

Microsoft is winning the business of top organizations, including Coca-Cola and the National Basketball Association. "In AI, customers are applying our comprehensive portfolio of tools, services, and infrastructure to address unique challenges, including those created by COVID-19," Nadella said.

In addition to strong top-line growth, the tech giant is a cash machine, generating $13.7 billion in free cash flow in the most recent quarter, up 25% year over year. Management attributed this to healthy cloud billings and collections.

Microsoft might be the best cloud stock to own right now, given its share gains and its dominance in the consumer market with Windows and Office software. The stock trades at a forward P/E of 35 and sports a dividend that yields just under 1% as of this writing. 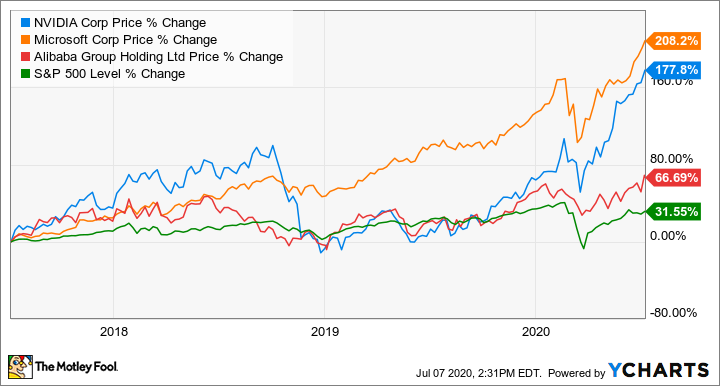 Alibaba is a leading digital platform in China, where it serves 780 million users across its e-commerce, retail, and streaming media businesses. Globally, Alibaba has 960 million users and has set a goal of reaching two billion by 2036.

Investors should keep an eye on Alibaba Cloud -- the top provider in China. That unit provides only 11% of the company's total top line, but its revenue increased 58% year over year in its fiscal 2020 fourth quarter. That growth was driven by increased video consumption and the wide adoption of remote working and learning during the COVID-19 pandemic.

With Alibaba, investors get a fast-growing cloud computing leader along with enormous potential to benefit from growth in e-commerce. During the company's last earnings call, CEO Daniel Zhang said, "Our scale has now reached one-sixth of China's total retail sales, which was about $6 trillion last year, and we believe there is still tremendous potential of growth."

On cloud, Zhang was equally optimistic: "We believe the pandemic will further accelerate digital transformation of enterprises. All industries, including public sectors, will choose to move their technology infrastructure to the cloud."

Alibaba is the best value featured here with a forward P/E of 30. That valuation reflects the risk of investing in Chinese companies, but given the massive potential for growth, Alibaba might be a steal at current levels.

While nothing is guaranteed in the business world or the stock market, investing in companies that are benefiting from the rapid growth of cloud computing is as close to a sure bet as you'll find in your portfolio.