Commodity producers are speaking with a singular voice, as each of the world's top three diversified miners has shown a growing reluctance to follow through with their more aggressive investment plans of yesteryear. From their previous emphasis upon increasing production volumes across a range of products, the majors have grown noticeably more selective in terms of the products and projects where they may continue to pursue some growth.

But one miner took a bold step further this week, as VALE (NYSE:VALE) CEO Murilo Ferreira declared: "We are at the end of the supercycle, we are living a new moment in the mining industry. The new scenario requires stricter discipline in capital allocation." In a moment, we'll tackle the important question of whether Ferreira is correct that the supercycle has run its course; and if so... was it really a supercycle at all?

First, let's examine how the major producers are adapting to their scaled-back expectations for commodity prices. VALE announced the company will come $3.9 billion short of its initial budget for 2012 capital expenditures of $21.4 billion, and that 2013 spending will contract further still to just $16.3 billion. Reflecting a clear strategic emphasis upon the company's most profitable business, VALE indicated that 47% of next year's budget will be allocated to the iron ore business unit.

Shedding more light on what this "new moment" for the mining industry may look like, Ferreira added: "We are now more than ever strongly committed to investing only in world-class assets, with long life, low cost, expandability and high quality output, capable of creating value through the cycles. The optimization of capital management is underpinned by relentless efforts to reduce our cost structure on a permanent basis". Rivals Rio Tinto (NYSE:RIO) and BHP Billiton (NYSE:BHP) echoed similarly cautious outlooks over the past week, with the former announcing aggressive cuts of $2 billion from capital spending and $5 billion from its operating and support costs over two years.

Is the commodity supercycle really dead?

As a long-standing proponent of investment exposure to the commodity complex, I have a lot riding on pinpointing the correct long-term outlook for global commodity supply, demand, and pricing. Earlier this year, for example, I doubled-down on my personal holding in Peabody Energy (OTC:BTU) after concluding that "the long-term outlook remains intact for thrilling profitability as worldwide demand for thermal and metallurgical coals progress through a major bullish supercycle." I have monitored the full spectrum of scaled-back, near-term market expectations among the key commodity producers (and related service and equipment providers), and marveled all the while at the rather resilient nature of the longer-term outlook for global demand.

Most certainly, China is the epicenter of bullish potential within the commodity outlook, and the acute slowing of that nation's previously blockbuster GDP growth during 2012 has injected a pall of some uncertainty into the prevailing forecasts. But China refuses to slow quietly, and until we can observe the impacts of the $150 billion, infrastructure-focused stimulus package announced in September, not even the near-term portion of these increasingly cautious forecasts can be viewed as the final word.

In fact, the entire world refuses to slow quietly, and has engaged instead in what is essentially a global campaign of bailouts, stimulus, and currency intervention aimed squarely at the persistent threat of economic turmoil and contagion. In their collective responses, the key central banks have charted what I consider a dangerous path into global and competitive currency debasement. I believe that upward pressure upon nominal commodity prices will prove an unavoidable consequence of those actions, and so a portion of my own bullish price outlook for commodities stems from dynamics that are not directly tied to the outlook for global demand growth.

Ambrose Evans-Pritchard, international business editor at London's The Daily Telegraph, summed things up nicely in his appropriately titled column: "The world's commodity supercycle is far from dead." After reminding us to "never, ever ignore the global money supply," Evans-Pritchard continues: "The key gauge -- real six-month M1 -- touched bottom at 1.5pc in May. It jumped to 3.7pc in September and seems on the same track for October. The world's kindling wood is crackling again. Can commodities really stay cold?"

Rather than risk turning investors away from the resource sector altogether, perhaps it's more constructive to contemplate a downgrade in terminology from "supercycle" to just plain "secular bull market." Simply declaring the supercycle dead would seem to distract from the important process of adjusting market outlooks and pinpointing those meaningful growth opportunities that do still remain within the sector. After all, BHP Billiton CEO Marius Kloppers still expects to see 650 million tons of incremental iron ore demand by 2020. Equipment manufacturer Joy Global (NYSE:JOY) points out that India alone will add 97 gigawatts of new coal-fired power generation over the next several years, requiring an additional 300 million metric tons of annual supply. And forecasting some 700 gigawatts of additional solar capacity by 2020, fund manager Stephen Leeb sees that one application alone requiring some 50% of the world's annual mined supply of silver!

What does a supercycle even look like?
It's not entirely clear to me which criteria we might use to properly distinguish between a plain old secular bull market and the more dazzling term "supercycle." Incredibly, a look back over the price performance of some key industrial commodities and the stocks of their major producers over the past five years yields a picture that is strikingly unsupportive of the supercycle designation altogether. Before I open the floor for your own comments on whether the cycle has ended, I wish to ask for your thoughts on whether we've even been in a supercycle over the trailing five years. The following five-year chart combines price performance for iron ore and base metals with the stocks of major producers VALE, BHP Billiton, Rio Tinto, Freeport-McMoRan (NYSE:FCX), and Teck Resources (NYSE:TECK). With all of those indicators in the red over the past five years, I wonder, what does that say about the appropriateness of the supercycle designation in the first place? Is this what a global commodity supercycle looks like? I look forward to your thoughts on the matter. 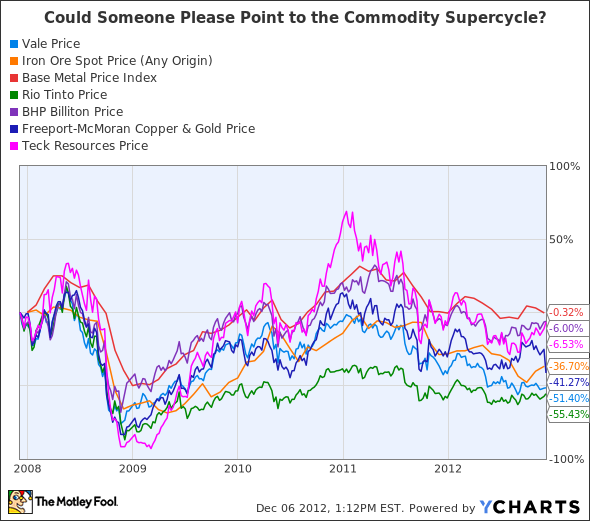