The past decade has been great for stocks. From 2011 through 2020, the average stock market return was 13.9% annually for the S&P 500 Index (SNPINDEX:^GSPC). The returns can -- and do -- vary wildly from one year to the next, and an "average" year almost never actually generates the average return.

Over that decade, only one year -- 2014, up 13.8% -- was close to the 13.9% average annualized return. The catch? Nobody knows which years will be above or below average. This is where the one-year average is helpful only in setting the stage for stocks as good long-term investments. 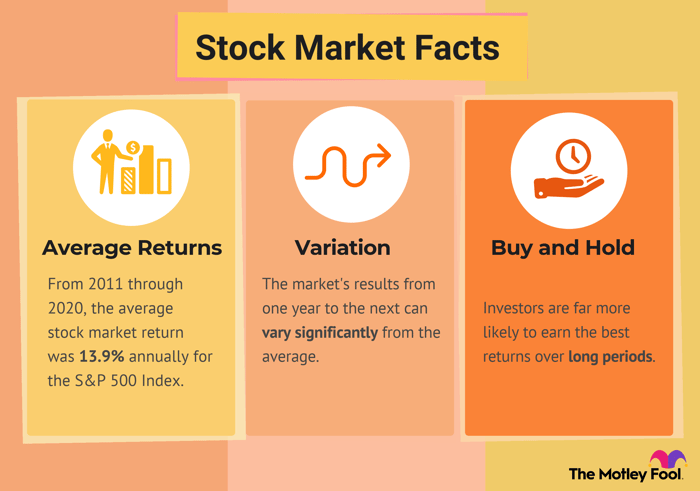 In general, when people say "the stock market," they mean the S&P 500 index. The S&P 500 is a collection -- referred to as an index -- of just over 500 (the list is updated every quarter with major changes annually) of the largest publicly traded U.S. companies. And, while there are thousands more stocks trading on U.S. stock exchanges, the S&P 500 makes up about 80% of the entire stock market value on its own, making it a useful proxy for the performance of the stock market as a whole.

The market's results from one year to the next can vary significantly from the average. Let's use the 2011-2020 period as an example:

To put it another way, six of those 10 years resulted in outcomes that were very different from the 13.9% annualized average return over that decade. Of those six very different years, three generated significantly lower returns (with one year, 2018, resulting in losses), while three years delivered substantially higher returns. Two of those years -- 2013 and 2019 -- generated returns of more than 30%, helping to make up for the years that saw below-average returns.

Let's take a look at the stock market's average annualized returns over the past 10, 30, and 50 years, using the S&P 500 as our proxy for the market:

It's worth highlighting the variance in annual returns from one year to the next versus the average. Since 1971, here is a breakdown of the yearly results:

In addition to showing the average returns, the table above also shows useful information on stock returns adjusted for inflation. For example, $1 invested in 1971 would be worth $177.33 today. But in spending power, $177 isn't worth what it would have been in 1971. Adjusting for inflation, that $177 will buy the same amount of goods or services you would have been able to buy in 1971 with $27.12.

If there's any one lesson we can take from the breakdown of annual results versus the average, it's that investors are far more likely to earn the best returns over long periods. There's simply no reliably accurate way to predict which years will be the good years and which years will underperform or even lead to losses.

But we do know that, historically, the stock market has gone up more years than it has gone down. The S&P 500 gained value in 40 of the past 50 years, generating an average annualized return of 10.9% despite the fact that only a handful of years actually came within a few percentage points of the actual average. Far more years significantly either underperformed or outperformed the average than were close to the average.

What's a person to do? Buy high-quality stocks, ideally regularly across every market condition, and hold those investments for many years. The evidence is overwhelming that investors who try to trade their way to higher returns with short-term moves or buy and sell based on projections of short-term peaks and bottoms generally earn below-average returns. Moreover, those strategies require substantially more time and effort while resulting in higher fees and taxes that further reduce your gains.

If you're looking to build wealth, investing in stocks is an excellent place to start. But to get the best returns in stock investing, use the method that's tried and true: Buy great stocks and hold them for as long as possible.