One stock on many people's radar these days is Disney (NYSE:DIS), and for good reason. Disney is a beloved household brand that has stood the test of time for almost 100 years. In addition, its shares have been mauled by this bear market, down about 33% from all-time highs reached late last year. I've actually fielded more questions about Disney's stock from friends than about just about any other company out there. 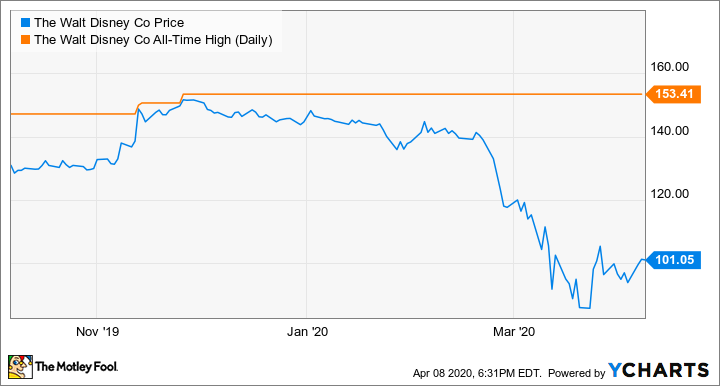 There's no doubt that Disney has amazing franchises and content. Yet while the long-term picture should remain intact, does that mean the stock is a good buy at these levels?

For that, investors need to look at Disney's revenues and profits across various segments, along with its valuation.

Disney is a cautious buy for the long term. Image source: Disney.

Disney's current year-over-year growth rates have increased due to the acquisition of Twentieth-Century Fox, which closed in March of 2019. Yet last quarter provides a recent snapshot of the fully combined companies. The segment breakdown for revenue and operating income worked out like this:

As you can see, Disney's main profit center is its parks, experiences, and products segment. Unfortunately, that's the very segment that is set to fall hard over the next quarter and potentially the next two years. After all, social distancing can only go so far in mitigating the spread of COVID-19. Without a vaccine, I find it hard to believe this segment will earn any profits for the next year and possibly longer. In fact, the segment might produce losses for a significant period of time. Chairman Bob Iger suggested on Wednesday that Disney might implement temperature checks at park entrances, but it's still uncertain whether that would get the all-clear from medical authorities or if consumers will believe they would be 100% safe.

Adding to the problems is the studio entertainment segment, which could also be in for a rough ride this year. Disney has recently published an updated movie release schedule, pushing several releases back to later in the year. The first release on the new schedule is a Pixar movie called Soul, which is slated to be released on June 19, followed by Mulan on July 24.

However, just because the films will be released doesn't mean theaters will be packed. In fact, China had recently opened its movie theaters back up, only to again shut them down shortly thereafter as authorities worried about a second wave of infections.

Basically, even though films might be released this year, it's possible that theaters could be only half full -- if they're open at all -- due either to social distancing policies or to fear of reinfection.

As if these two headwinds weren't enough, Disney's media networks division could be affected as well. After all, the media networks division includes ESPN, and right now, there are no sports events on TV. Second, if consumers are strapped for cash, they might begin to cut the cord on traditional cable. While that could help Disney+ numbers (as described below), Disney would lose out on the lucrative ESPN subscription fees from cable providers as well as on revenue from advertisers.

Speaking of advertisers, advertising revenues are set to plunge this year, which would also hurt the media networks division. In fact, research firm MAGNA Global expects linear ad revenue to decline nearly 12% in 2020, with an uncertain recovery thereafter.

The one bright spot in Disney's arsenal is still unprofitable

Though all three of Disney's main profit centers are set to take hits this year and possibly next year, one relative winner should be Disney+. The company's new streaming service was already off to a lightning-fast start when it launched back in November, garnering 26.5 million subscribers in just its first half-quarter. The company recently released Disney+ across Western Europe on March 24 and into April, and on Wednesday, April 8, the company revealed it had already passed the 50 million subscriber mark, sending shares higher.

This is all great news and shows that Disney could very well become a leading direct-to-consumer powerhouse. The problem is that even with that great growth, Disney doesn't envision its direct-to-consumer offerings becoming profitable until 2024. The success it's seeing could speed that date up to 2023, but it will still be a while before investors see Disney+ success filtering down to the company's bottom line.

What's up with the stock?

Based on the earnings through the 12 months ended in December, Disney only trades at around 17 times trailing 12-month earnings of $5.94. However, those earnings include losses from Disney+ and only about nine months of contribution from the Twentieth Century Fox business, plus the added interest expense of the new debt Disney took on for the Fox acquisition.

Going back to fiscal 2018, before the closing of the Fox acquisition or the launch of the direct-to-consumer business, Disney earned $8.36 per share. That means at the current price, Disney is only trading at about 13 times its 2018 earnings.

That seems incredibly cheap for a top blue chip company such as Disney. However, investors need to remember it could take two or three years or maybe even longer for Disney to get back to that level of earnings, especially if the parks segment goes negative, out-of-home theater-going takes at hit, and TV advertising falls.

That's why determining whether Disney is a buy depends on your time horizon. For those with a strong stomach who don't mind weathering a few quarters of ugly net losses, now could be a great time to pick up shares for the long term.

However, the short-term picture is really quite hazy. I wouldn't be surprised if the stock goes lower once again from here, especially if social distancing drags on throughout the year. Comparing Disney to some other big companies in the technology sector, I would prefer the top tech giants that are more likely to benefit from the stay-at-home economy over Disney at this point.

That's why for those interested in picking up some Disney shares for the long term, I would suggest taking a partial position now then adding periodically, maybe once a month or once a quarter, until you've invested the full amount you want to invest. If the stock rockets higher from here, the worst that will happen is that you won't make as much as you could have.

However, I don't think a rocket higher is in the cards at the moment. As they say in Hollywood, buckle up. It's gonna be a bumpy ride.